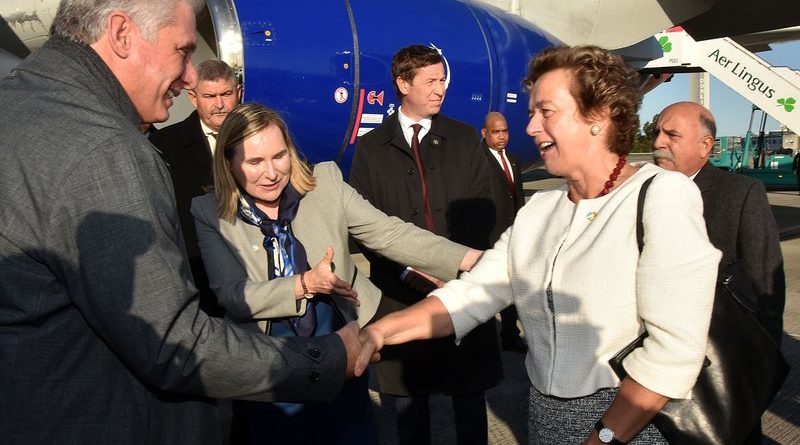 The first official visit by a serving president of Cuba to Ireland will begin on Sunday when Miguel Díaz-Canel arrives for a three-day stay.

During the trip he will attend a reception hosted by President Michael D Higgins at Áras an Uachtaráin.

It follows President Higgins’s visit to Cuba in February 2017, the first by an Irish head of State to the Caribbean island.

Mr Díaz-Canel has been president of the communist state since succeeding 86-year-old Raul Castro in April 2018. The 59-year-old has been a member of the politburo since 2003 and was the only candidate named to contest the position.

He is also expected to succeed Mr Castro as general secretary of the Communist Party in Cuba as well as commander-in-chief of its armed forces within the next two years.

Mr Díaz-Canel will be joined by a large Cuban delegation. He will visit a number of Dublin landmarks on Sunday, including St Stephen’s Green, the Book of Kells in Trinity College Dublin as well as an as-yet-unannounced Irish pub.

He will be received by Mr Higgins at Áras an Uachtaráin on Monday.

It is also expected he will make a courtesy call to Taoiseach Leo Varadkar in Government Buildings later on Monday.

The Cuban president and his delegation will depart from Ireland on Tuesday.

Neither Raul Castro, nor his late brother Fidel, ever visited Ireland in an official capacity. However, Fidel did stop off at Shannon Airport on at least one occasion during his long tenure. In 1982 he left a present at Shannon Airport for then taoiseach Charles J Haughey, who subsequently wrote a thank-you letter to Mr Castro.

President Higgins faced criticized in 2016 following the death of Fidel Castro when he described him as “a giant among global leaders whose view was not only one of freedom for his people but for all of the oppressed and excluded peoples on the planet”.

He made only passing reference at the time to allegations of human rights abuses in Cuba during Fidel’s long period of presidency.

Ireland and Cuba established diplomatic relations in 1999. Micheál Martin, who was then minister for foreign affairs, visited Havana in 2009 and there was a reciprocal visit by his Cuban counterpart to Dublin in 2010.

Featured image: Upon his arrival at the Dublin International Airport, he was welcomed by the director of protocol of the Irish Foreign Ministry, Emma Madigan.