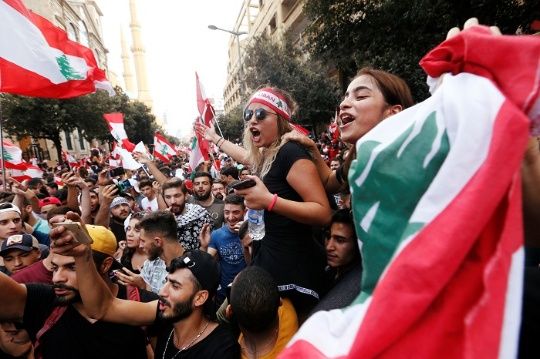 Ending rampant corruption is a central demand of the protestors, who say the country’s leaders have used their positions to enrich themselves for decades through favorable deals and kickbacks.

Protesters in Lebanon flooded the streets Sunday, keeping pressure on Prime Minister Saad al-Hariri as a self-imposed deadline to deliver a package of badly needed reforms for the country’s crumbling economy drew near.

Anti-government protests that have swept the country since Thursday have pulled together all segments of Lebanese society in an unusually unified call for the downfall of a political elite that protesters blame for plunging the economy into crisis.

On Sunday demonstrators clogged streets across the country for a fourth day with marches resembling outdoor festivals. Loudspeakers blared nationalistic music as energized protesters chanted calls for the government’s fall. Local media reported that one million protesters have taken over the capital Beirut and its surroundings.

“I didn’t expect people from the country’s north, south and Beirut to join hands and like each other. The protests have brought together everyone and this has never happened before,” said Sahar Younis, a 32-year-old worker with a non-governmental organization.

Hariri, who is leading a coalition government mired by sectarian and political rivalries, gave his feuding partners a 72-hour deadline on Friday to agree to reforms that could ward off economic crisis, hinting he may otherwise resign.

He accused his rivals of obstructing budget measures that could unlock $11 billion in Western donor pledges and help avert economic collapse.

Government sources said Hariri was waiting for his coalition to get on board with the economic proposals, which include taxes on banks and implementing a plan within one month to overhaul the country’s costly and crumbling state electricity utility.

Reforming the country’s wasteful electricity sector is key for potential investors and donors who consider it one of the biggest strains on the country’s depleted finances.

Pressure on Hariri has mounted as a rising chorus of voices, from union leaders to politicians, join popular calls for his government to resign. The Maronite Christian Lebanese Forces party said late Saturday its four ministers would withdraw from the government.

If Hariri, a Sunni Muslim who is traditionally backed by the West and Sunni Gulf Arab allies, resigns it would be harder for the various parties that make up the ruling coalition to form a new cabinet.

A new cabinet would also likely see Hezbollah and its allies more in control, a shift that would make it nearly impossible for international donors or Gulf Arab countries at odds with Iran to offer aid or investments.

Ending rampant corruption is a central demand of the protestors, who say the country’s leaders have used their positions to enrich themselves for decades through favorable deals and kickbacks.

“All of the leaders should be put under house arrest and be held accountable to return the money they stole from the state so Lebanon can get back on its feet,” said Antoine Zahli, 43, a pharmacist who was among the protesters in downtown Beirut.

Charbel Antoun, a 17-year-old student added: “We want to stay in Lebanon to build our future but if these corrupt politicians stay here what future will be left for us?”