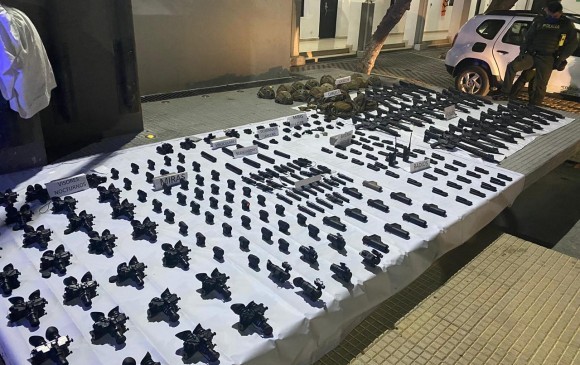 Venezuelan minister of communication, Jorge Rodríguez, reported this Monday that, in the operations to receive Venezuelan migrants returning to the country through the border between Colombia and Venezuela, three alleged paramilitaries and one of the mercenaries working with Cliver Alcala Cordones under American orders were detected and detained. He indicated that they tried to enter through San Antonio del Táchira, “trying to sneak in with the migrants.” More information about them will be released this Tuesday, including their names and the groups to which they belong.

At the daily press conference after the meeting of the Presidential Committee for the prevention and control of the Covid-19 coronavirus, Rodríguez reported this Monday afternoon that “power factors that make a living in the Colombian government are taking advantage of the generosity of the Bolivarian government and the people of Venezuela and they are trying to sneak in paramilitaries, deserters and mercenaries who come to sow violence in Venezuela.”

He explained that each person who enters the country is fingerprinted and the data contrasted in real time with the file of Venezuelan IDs, with the file of the Integrated Police System, and with the Interpol file. “If someone has a criminal record, we will act accordingly, if one belongs to paramilitary groups, we will publicly denounce them, and if they are mercenaries or deserters who trained in paramilitary camps, we will also denounce them.”

On Sunday, April 5, President Nicolás Maduro reported that, between Saturday and Sunday, 1,652 people had entered Venezuelan territory through special operations carried out by the government at the border, to receive people who left the country and wanted to return, this in particular after press information of Venezuelan migrants who had been mistreated or expelled from their residences in countries such as Colombia, Ecuador or Peru have been circulated.

RELATED CONTENT: Colombia: Congressmen Ask President Duque Not to Facilitate a US Military Operation Against Venezuela

“In order to avoid situations of unrest, discomfort and the sowing of violence in this process of arrival of our sisters and brothers, President Nicolás Maduro has decided to impose a curfew on the municipalities of Simón Bolívar (San Antonio del Táchira) and Pedro María Ureña (Ureña), from 4 in the afternoon until 10 in the morning of the following day.”

He reported that only this Monday, the curfew will begin at 8 at night. “There can be no movement of any kind of people and vehicles” during the enforcement of the curfew.

Those who enter Venezuela from Cúcuta must meet these requirements:

The Venezuelan government will be in charge of the logistics, food and lodging. Then they will be taken to their final destinations.