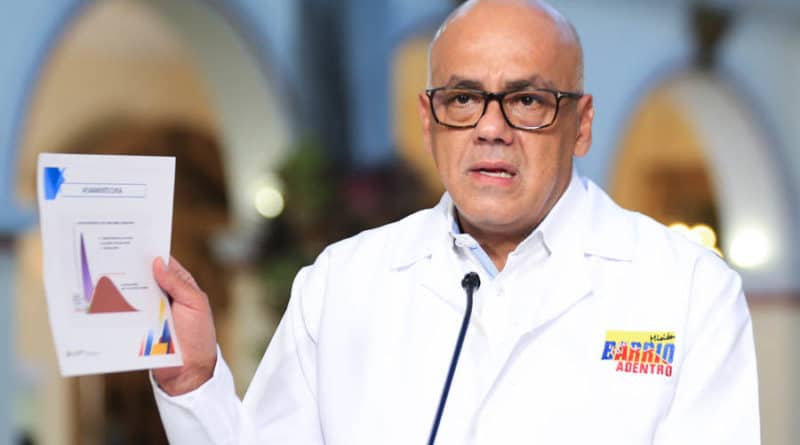 In statements from Miraflores Palace, the Minister for Communication and Information, Jorge Rodríguez, confirmed six new cases of Covid-19 coronavirus infection to bring the number to 165 infected. Two are residents of La Guaira state, two of Táchira state, one of the Capital District and one of Trujillo. 65 Venezuelans are fully recovered from the outbreak, Rodríguez said Monday in a broadcast by Venezolana de Televisión.

Three of them are male and the rest female. Of the total number of cases, Rodríguez explained that 39 patients are in home isolation, 24 are confined in Comprehensive Diagnostic Centers (CDI), another 15 are in hospitals, 13 in private hospitals, 2 in hotels and the number of deceased remains at seven.

Rodríguez explained that among the infected, there is a 46-year-old male patient in the Capital District, who was admitted on April 2 in a private clinic with fever and headache. There is also the case of a 16-year-old boy who came from Colombia and is currently in Táchira.

The Venezuelan Minister of Communication stressed that any person who enters Venezuela through the land border will undergo a screening test for the outbreak and must be in quarantine for at least 15 days. “All the people who enter from Cúcuta to the Venezuelan territory by way of the Simón Bolívar International Bridge will be and are received with open arms, but the rules must be met to protect them and protect the population. Each and everyone must undergo screening tests, whether or not they have symptoms (…) Everyone must comply with a mandatory quarantine of at least 15 days even in the cases when the tests result is negative,” said Rodríguez.

RELATED CONTENT: Oliver Stone Blames US for COVID-19 Deaths in Iran and Venezuela

On the other hand, he urged families that have a patient in quarantine for testing positive for Covid-19 to be totally careful and isolated, in order to avoid contagion from community transmission and not have a scenario similar to that of Italy or Spain. “We must be careful with total isolation. Those who are infected cannot have contact with other relatives,” he said.

In this sense, he said that the Bolivarian government maintains the corresponding health protocols and that there is concern regarding community cases, that is, those whose line of infection is unknown meaning not imported from other countries or people in contact with those ones.