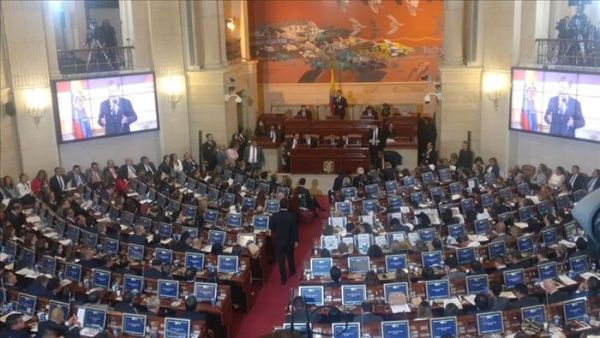 This Saturday a group of Colombian opposition congressmen and social movements requested in a public letter to the President of Colombia, Iván Duque, that he abstain from supporting any interventionist plan against Venezuela.

In the letter they remind the president that these types of decisions must be approved by Congress, which until April 13 is not working due to the quarantine to fight the Covid-19.

The letter refers to the recent statement made by the Defense Minister supporting a possible intervention by US troops in Venezuela. According to the signatories of the document, such statements are concerning and deserve a statement by the Head of State.

According to the senders, the priority of the country should be to face the social, health and economic emergency caused by the Covid-19 pandemic and to deviate from this purpose by entering a war would be “abuse, illegality and transgression of international law.”

According to article 173-4 of the Colombian constitution, it is the responsibility of the Senate “to allow the transit of foreign troops through the territory of the Republic.”

Likewise, article 237-3 says that “in the cases of transit of foreign troops through the national territory, of station or transit of foreign ships or aircraft at war, in waters or in territory or in airspace of the nation, the government should first hear a statement from the Council of State.”