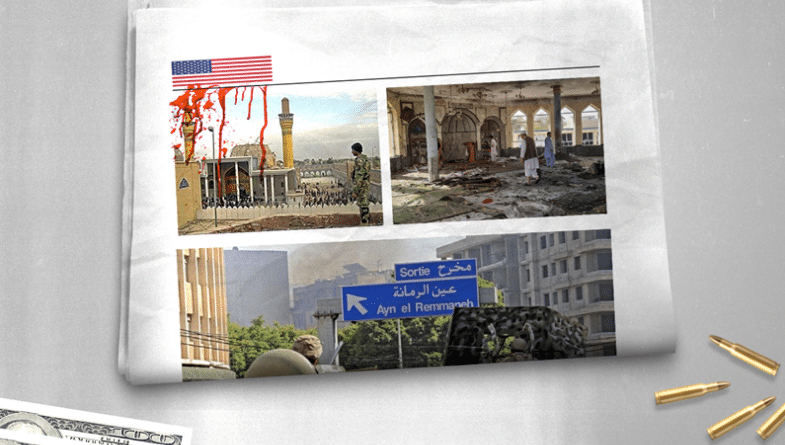 How is the US deliberately attempting to provoke civil wars in Iraq, Afghanistan, and Lebanon?

Iraq
When America, Britain, and the coalition of the greedy decided to crush Iraq under a barrage of bombs, cruise missiles, and multiple munitions, in its campaign of Shock and Awe to destroy Iraq, it was only the beginning.

With claims that Iraqi Generals had been corrupted in advance and the much-celebrated Republican guard would collapse, the western imperialist destruction of another sovereign state was only in its embryonic stage.

Crushing the Iraqi military was not a complicated matter. The overwhelming superiority of western military technology and firepower left the outcome of the war in little doubt, but like all wars winning was only beginning, it was the following occupation that would lead to brutal repression coupled with a hearts and minds propaganda blitz on the Iraqi people.

The real threat to western financial gain in Iraq through its programs of resource theft would be a united Iraqi resistant axis, utilizing all of the Iraqi territories, all of its resistance networks, and all those willing to play a part in a national war of liberation against the illegal occupying forces mainly British and American.

In order to prevent the Iraqi resistance from resisting the invaders, a way was to be found to weaken the resistance and have the Iraqi people fight each other and not the anglo -American invaders.

RELATED CONTENT: America’s Afghan War is Over, so What About Iraq – and Iran?

Sectarian murder was not a feature of daily life in Iraq prior to the 2003 invasion.

Then one Friday afternoon as people knelt in prayer in a Mosque probably praying for peace and an end to the violence and death brought to them at the hands of the invaders, a bomb shattered those prayers for peace along with the bodies of those saying those prayers and a new horror was visited upon the Iraqi people.

An attack on the Imam Ali Mosque in Najaf on 29 August 2003 left 95 Shia worshippers dead including Ayatollah Mohammed Bakir al-Hakim the spiritual leader of the Islamic revolution in Iraq.

This monstrous event occurred just five months after the invasion of Iraq on March 20, 2003.

Who was behind this hideous heinous act may never really be known. Al-Qaeda militants later claimed responsibility but that was in 2007.

Many wonder was this a deliberate attempt to provoke a civil war in Iraq?

Was it American or British special forces?

Was it others acting on behalf of, or directed by, western imperialists or Zionists interested in further destabilizing Iraq?

The result was a protracted campaign targeting Mosques, targeting the most vulnerable in society, people at prayer, and the resistance against the foreign occupation crumbled as the country fell into ethnic pseudo-religious sectarian strife. A Shia- Sunni civil war was instigated.

The winners were the west and its illegal occupation of Iraq, who were then given a freer hand to rob and plunder at will with little coordinated opposition.

In September 2005 in Basra, two undercover British soldiers disguised as Iraqi civilians shot and killed two Iraqi police officers who had tried to question them. The two SAS officers, Special Air Service soldiers were later detained and their car was found to contain explosives.

They were subsequently freed when the British army using tanks and a SAS assault team stormed the place where they were legally detained and illegally snatched them from lawful custody.

You can make up your own mind on why they were disguised as Iraqi nationals, why they murdered two friendly Iraqi police officers and why they had explosives in their car?

They divided the Iraqi people and the Iraqi resistance and they conquered Iraq for two decades.

Afghanistan
America has made a tactical withdrawal from Afghanistan.

Many claim it is a humiliating defeat for America which it is, but America left voluntarily.

There was no Taliban army at the gates of Kabul. The reality is the Taliban controlled the countryside and the invaders, Britain and America, had the cities.

Biden, corporate America, and their hangers-on in the United Kingdom establishment along with the military-industrial complex have robbed Afghanistan as much as they can.

They have used British and American taxpayers’ monies to destroy Afghanistan and pay for its continued occupation with trillions of dollars being paid out to private contractors and weapons manufacturers.

America, Britain and now bizarrely Australia are looking to project their power into the South China Sea in an attempt to retain their first world dominance of global commerce, finance, and technology.

A battle they have already lost.

They want to keep Afghanistan impoverished at war and away from the influence of China, Russia, and Iran.

To that end, we have now witnessed bombs exploding outside Shia mosques in Afghanistan, killing many, just like we saw in Iraq.

The seeds of civil war and war by proxies of the Afghan ISIS-K who are being reinforced by ISIS elements brought in from Iraq and Syria, armed and financed by the usual suspects from Turkey, EU America, and the Gulf states will only exacerbate the situation.

As relative peace was finally dawning on Afghanistan after another two decades of foreign interference in the internal politics of Afghanistan by western imperialist military and financial adventurism, we now witness the bombs of hate deployed once again.

If they can divide Afghan society through another western-inspired Shia-Sunny civil war, then politically for a time at least they will reconquer Afghanistan.

Lebanon
The tragic events surrounding the Port of Beirut explosion that killed and maimed so many, which left total destruction to hundreds of private homes, apartments blocks, and businesses, the cause of which is being investigated by a Lebanese judicial inquiry.

The inquiry is meant to portion blame on those who are directly or indirectly responsible for the storage of dangerous nitrates in huge concentrations in the heart of a busy Mediterranean port.

The judge is being accused by many of playing a part on behalf of the enemies of Lebanon in trying to scapegoat Hezbollah for being complicit in the explosion.

As victims and survivors of the bomb blast joined Hezbollah and Amal supporters in a peaceful demonstration at the judiciary offices in downtown Beirut, calling for the judge, Tarek Bitar to be removed, accusing him of being an American stooge trying to divide the Lebanese people, gunmen from the Christian Lebanese Forces opened fire on these unarmed protestors killing 8 and wounding nearly 35 others, some of whom are in critical condition and the death total may very much rise.

For decades, Lebanon -a confessional state- has been at war with itself on behalf of foreign powers like its former colonial occupier France, and more recently “Israel.”

From the Sabra and Shatila massacres in September 1982, where as many as 3000 Palestinian and Lebanese unarmed civilians, old men, women, and children were systematically and brutally murdered, after the Palestine Liberation Organisation left Beirut, to the events on October 14, 2021, in order to impoverish and enslave Lebanon, the west and “Israel” use the right-wing Christian Phalange, their political representatives and now the Lebanese Forces to do their killing.

Collectively they are all working against the sovereign interests of Lebanon and are in the pay of foreign nations alien to Lebanon. as Victoria Nuland, American Under Secretary of State for Political Affairs, who it is claimed by many, was instrumental in the events leading up to the Maidan square massacre of February 20, 2014, in Kiev, Ukraine, resulting in the following coup, suddenly appeared in Beirut on the same day fundamentalist right-wing Christians murdered the victims and survivors of the Beirut port blast alongside peaceful unarmed Hezbollah and Amal supporters.

What is Victoria Nuland doing in Beirut?

Well, she was defending the judge Tarek Bitar whom many Lebanese want to see step down, while simultaneously meeting the generals of the Lebanese army confirming America will give the Lebanese army a further 67 million dollars in military aid.

What has America, Britain, and “Israel” got planned for Lebanon?

It looks like America is buying Lebanese army loyalty with 67 million dollars while Britain already stands accused of running spy networks from inside the military intelligence corps of the Lebanese army through a British company.

Is another debilitating bloody civil war the desired outcome of western and Israeli imperialist adventures in Lebanon?

Dividing Lebanon, so the imperialists and colonial “Israel” can conquer the country.

Divide and conquer? Well after all it’s the imperialist way.