Healthcare workers sanitizing a playground in a Venezuelan school. Photo courtesy of RedRadioVE.

Saturday, October 23, was the 587th day of the pandemic in Venezuela, and 1,056 new COVID-19 infections were reported in the country in the last 24 hours; all were cases of community transmission. In addition, 10 deaths were reported. The Vice President of Venezuela, Delcy Rodríguez, informed this through Twitter.

With this update, Venezuela has a total of 399,667 reported infections and 4,800 deaths. Of this total, 14,146 are active cases with 9,230 being treated in hospitals: 4,363 in comprehensive diagnotic centers (CDIs) and 553 in private clinics. The number of people who have recovered is 380,721, which represents 95% of the total number of infections. 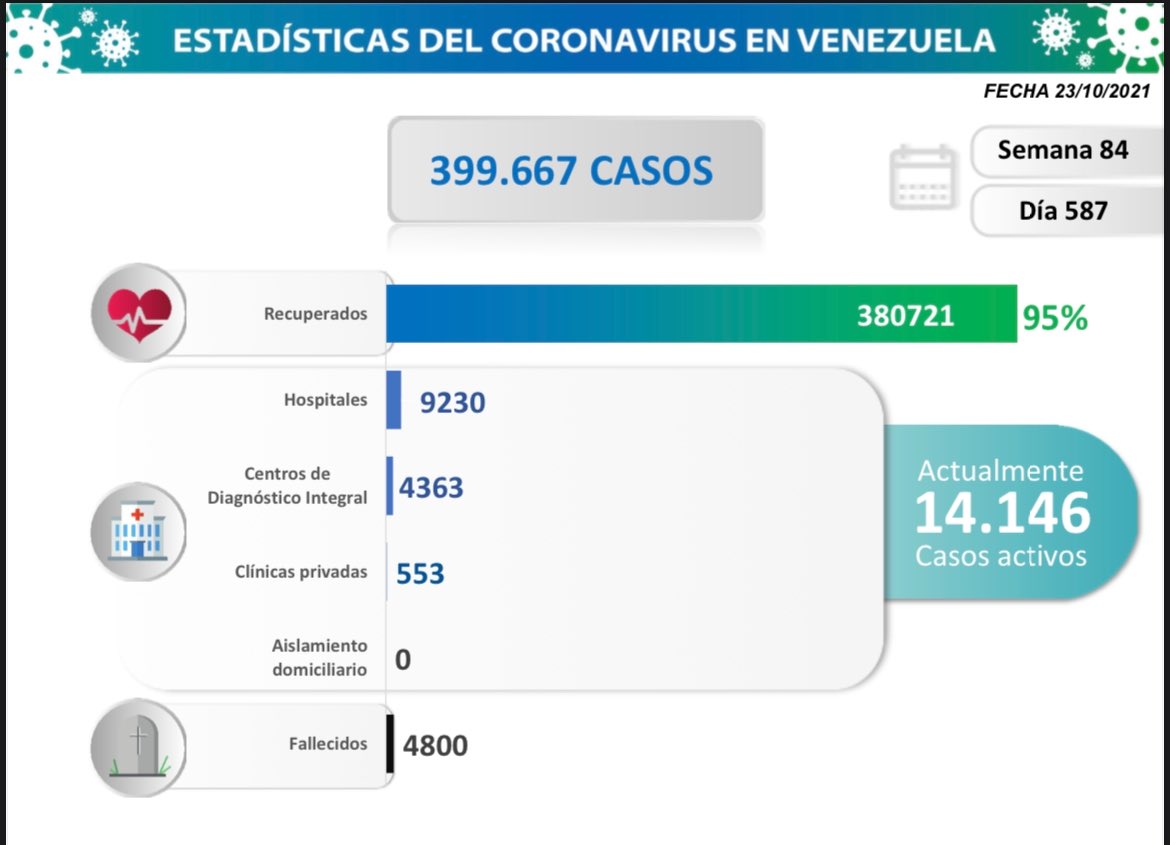 Breakdown of the cases
On day 587 of the pandemic, Venezuela registered community cases in 23 states, among which the most affected are Caracas with 288 cases, Miranda with 223, and La Guaira with 196 cases. The number of reported cases in other states are detailed in the following image. 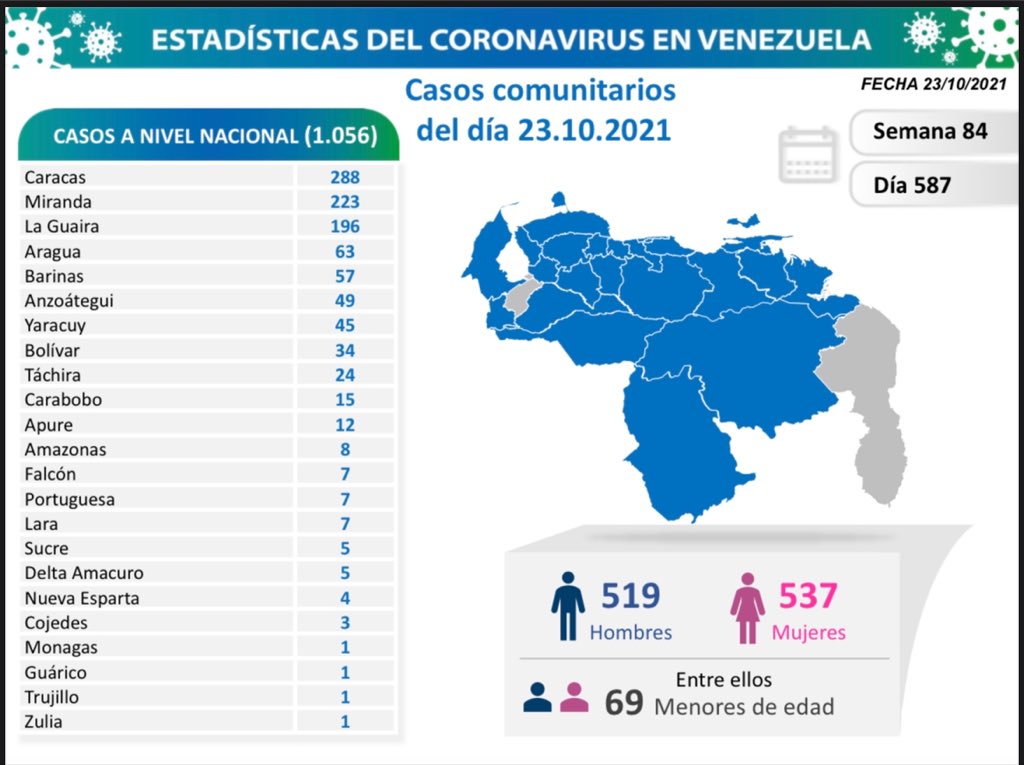 These are followed by the parishes Santa Rosalía, El Junquito, and El Paraíso with nine cases each, 23 de Enero and La Pastora with eight cases each, Candelaria with seven cases, San José and Altagracia with five cases each, Macarao and San Agustín with four cases each, and Santa Teresa with one case. 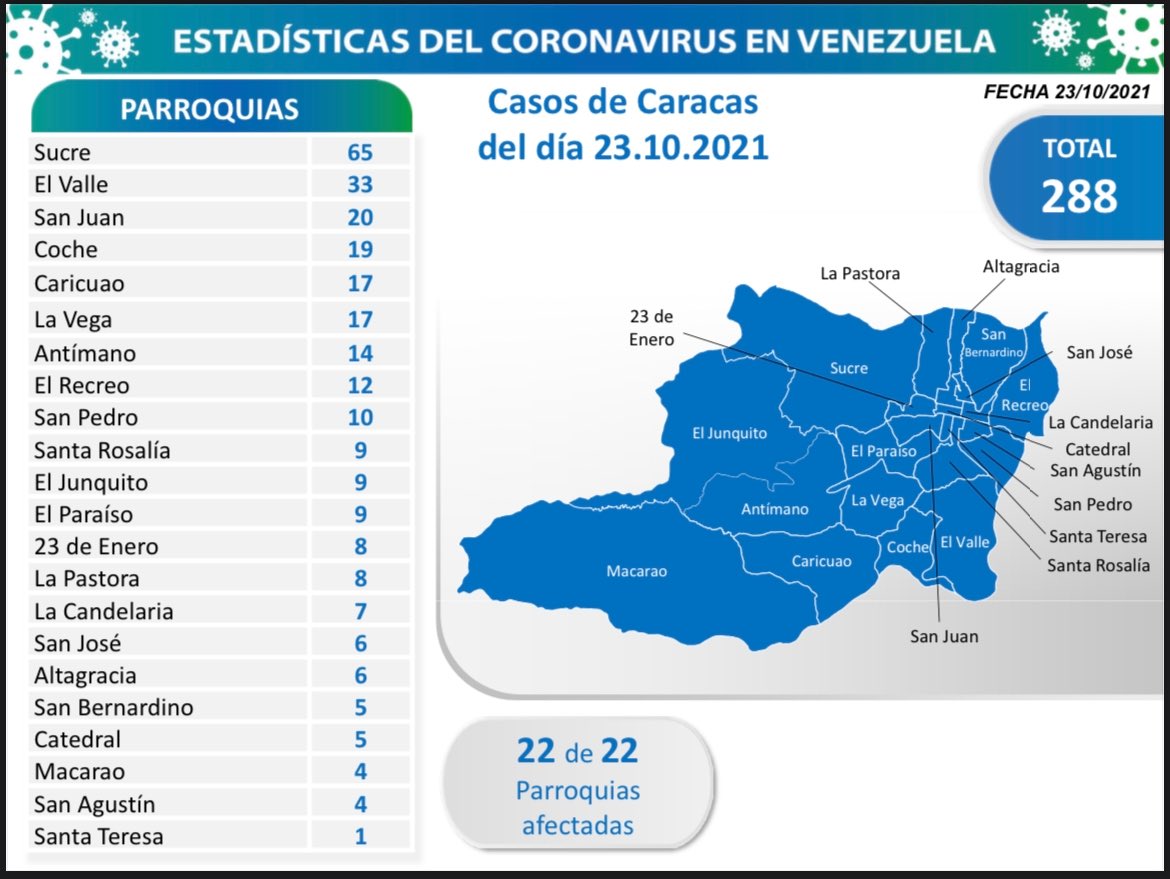 Deaths
Vice President Delcy Rodríguez also reported the lamentable death of 10 patients, which takes the total to 4,800 so far during the pandemic. Among the 10 who passed away, there were two women aged 86 and 74 and three men aged 79, 78, and 69 years from Caracas. Two men from Lara state, aged 73 and 61, also died, as well as one 92-year-old man from Miranda state, one 70-year-old man from Portuguesa state, and one 66-year-old man from Zulia state.

The vice president spoke about the beginning of in-person academic activities at all levels in Venezuela starting Monday, October 25. “In Venezuela, we are ready for a safe return to the classrooms, with all biosecurity measures,” she explained. “We remind our children, parents, and representatives of the importance of complying with all prevention and care measures. Together and united, we are all fighting for health.”