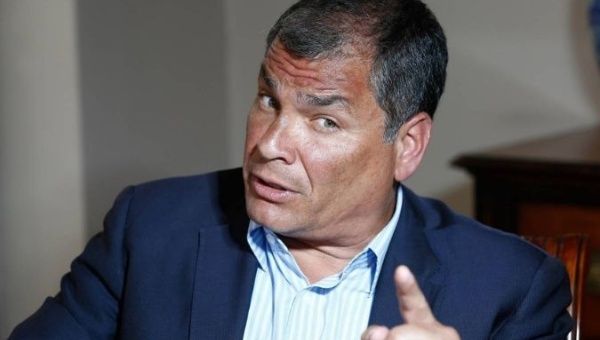 Correa received an email saying the account was “disabled for violating Facebook’s internal policies,” and that the “account will not be reactivated. This is the final decision on our part.”

Former Ecuadorean President Rafael Correa accused the administration of current President Lenin Moreno and Facebook’s Director for Latin American Politics and Government, Diego Bassante Wednesday of being the main culprits behind the closing of his official Facebook fan page.

“There was never a warning, they never said why they suspended a personal, verified account of an ex-president with 1.5 million followers,” the former president tweeted. On April 12, Correa denounced that the account had been closed, without prior warning or explanation, a day after he publicly criticized Moreno for withdrawing asylum from WikiLeaks co-founder Julian Assange.

What seems to have tipped-off the former president is at Tuesday’s meeting between Facebook’s Bassante, Lenin Moreno and Ecuador’s National Communications Secretary Andres Michelena. Bassante, an Ecuadorean national publicly expressed his dislike of Correa and openly supported right-wing media in Ecuador that sided with political opponents and critics.

After many tries to reactivate his account, on May 21 Correa received an email from Facebook’s Client Support Analyst who said that the account was “disabled for violating Facebook’s internal policies,” and that the “account will not be reactivated. This is the final decision on our part.”

Regarding the closure of the fan page back in April, CNN contacted Facebook to find out why and received a response without making direct reference to Rafael Correa’s account, saying that ”…policies prohibit the disclosure of private personal information, including phone numbers, addresses, banking information.”

This could have to do with Correa’s request for an investigation into a bank account related to the INA Papers corruption scandal that involves Moreno and his family. Like many others, including media outlets, he posted the publicly known account number pertaining said tax haven several times.

“One more step in the brutal persecution, and another show of despair for case INA papers, of which the corrupt [Lenin] Moreno will not be able to escape. Only via this medium will I announce a new page. Do not fall for “fakes,” Correa tweeted after confirming the official closure.