An assembly of the protesters in the Casa de la Cultura, Quito, on June 25. Photo: Twitter/@CONAIE_Ecuador

Popular uprising against the repressive neoliberal government of President Guillermo Lasso continues in the streets of Ecuador, with protestors constructing barricades to defend themselves from the attacks of the sceurity forecs. According to the Alliance of Organizations for Human Rights of Ecuador, since the general strike began on June 13, at least 6 demonstrators have been killed and over 300 have been injured in the wave of repression by the police and army in response to the mobilization. The police has not released exact figures on how many have been arrested, but it is considered to be well over 100.

Last Sunday, June 26, Lasso lifted the state of exception that was in force in six provinces of the country for over a week, after the start of the mobilizations called by indigenous organizations due to the lack of response of the government to their social demands.

RELATED CONTENT: In Solidarity with the Ecuadorian People, for the Re-establishment of Democracy in Ecuador 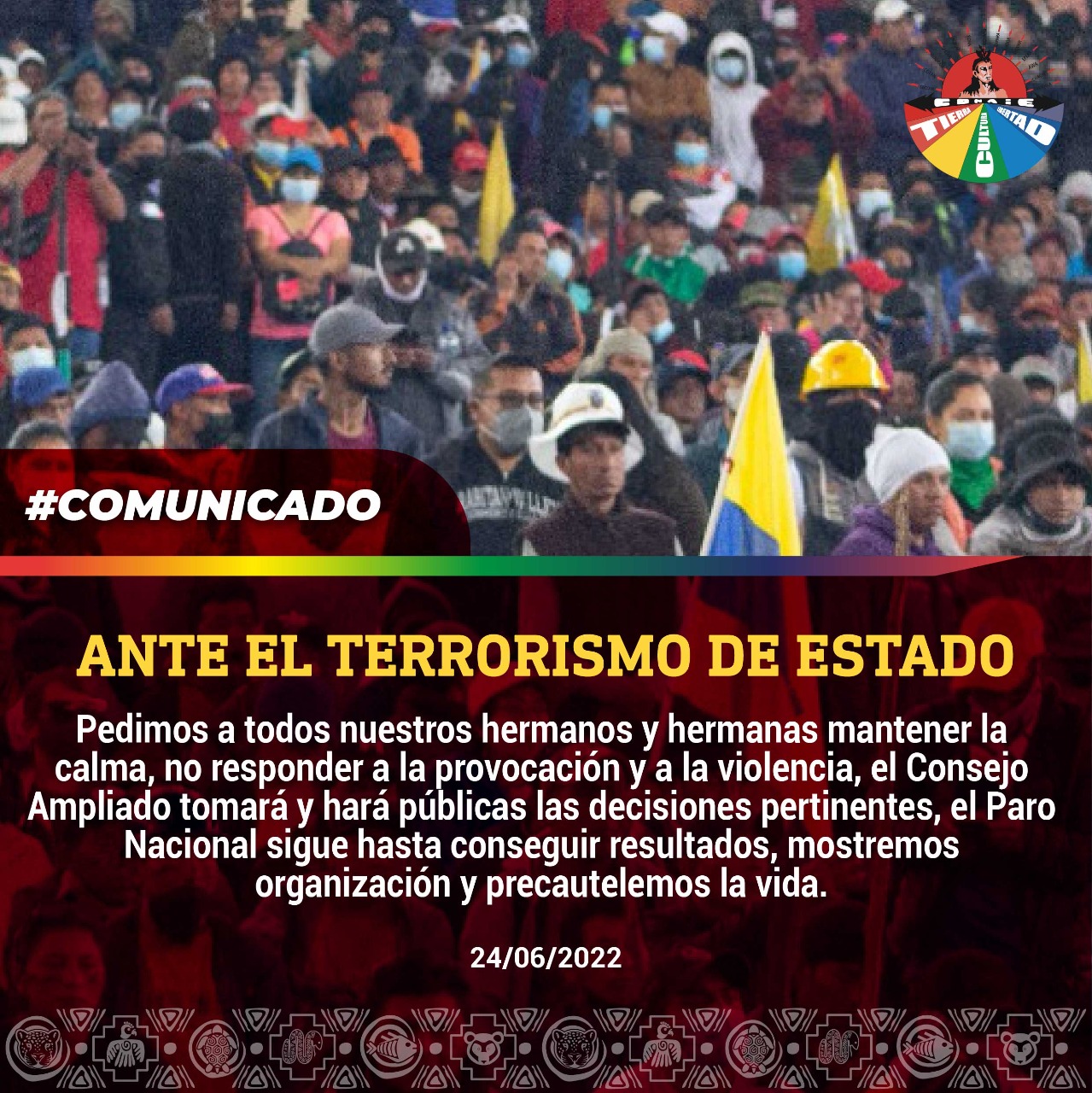 The General Secretariat of Communication of the Presidency of Ecuador announced that with the lifting of the state of exception, which had been a virtual lockdown, the government guarantees that the people can resume their usual daily activities.

The repeal of the state of emergency was one of the requests made by CONAIE to initiate a new process of dialogue with the Lasso government. However, on Tuesday, June 28, Lasso announced the suspension of the dialogue process, claiming that supporters of the national strike had attacked a convoy of oil trucks in the Amazon region, and added that the government cannot negotiate with those who do not want peace.

During a message to the nation broadcast on television, the Ecuadorian president reported that on Tuesday morning, about a hundred people had attacked a convoy of oil trucks, guarded by personnel of the police and the army, in Shushufindi in the Ecuadorian Amazon region. An army sergeant was reported dead, and 12 personnel were injured in the incident. However, the Alliance of Organizations for Human Rights reported that it was not an unprovoked attack by strike supporters; instead it was a confrontation between the security forces and the strikers, and that the police had opened fire on the protesters.

CONAIE condemned the suspension of dialogue, citing it as an example of the government’s “lack of will” to resolve the situation. The statement added that the national strike will continue in Ecuador. However, the indigenous organization, as well as other organizations participating in the strike, have reiterated their willingness to attend a dialogue process if the government restarts it.

National Assembly discards impeachment motion
The National Assembly of Ecuador did not approve the motion of impeachment against President Lasso, which had been presented on Saturday, June 25, by the leftist bloc Union for Hope (UNES). The bloc had based its petition on Article 130 of the Constitution of the Republic of Ecuador, accusing the president of being responsible for the serious political crisis and internal commotion that has shaken the country since the beginning of the mobilizations called by CONAIE. With 81 votes in favor of the impeachment motion, 42 votes against it, and 14 abstentions, the motion was not passed, as 92 votes were necessary for the impeachment procedure to continue.

The debate on the motion had started on Saturday evening itself, and continued until Tuesday evening, after which the vote was carried out. All of the 137 legislators participated in the debate and the vote. Since the start of the debates, several political analysts had suggested that the impeachment motion would not get the required number of votes, as UNES has 47 deputies in the parliament, while the approval of the petition would have required almost double the number of votes.

Human rights organizations condemn repression of protests
The International Solidarity and Human Rights Mission arrived in Ecuador on Monday, June 27, to observe what is happening in the national strike. These special rapporteurs on the rights of indigenous peoples and the rights to freedom of peaceful assembly and association of the United Nations Organization have expressed their concern about the situation in Ecuador, including the irregular detentions of more than 80 people, including the president of CONAIE, Leonidas Iza, and the excessive use of force and acts of violence by police and military forces.

The group has asked the government and other relevant bodies of the state to inform how it is guaranteeing due process to the detainees. The group also asked the government to explain the legal basis regulating the use of force by the Ecuadorian National Police and the Armed Forces, and to justify their deployment in indigenous territories.

María Elena Navarro, member of the International Mission, pointed out that among the serious factors that they have identified, is the decree restricting the right to social protest. She also condemned the attack on the Casa de la Cultura.

The International Mission confirmed the death of five people during the protests, and reported that some children have been missing, describing them as “victims of State policy.” It also condemned the attitude of the government which, instead of contributing to dialogue, is carrying out a “repressive policy towards defenseless citizens.”

Vivian Idrovo, coordinator of the Alliance of Organizations for Human Rights, expressed in a press conference: “What we are living through seems like a dictatorship—excessive use of force and the way in which protesters were treated. There is no statute of limitations for these violations. The State has already violated rights, it has been evident.”