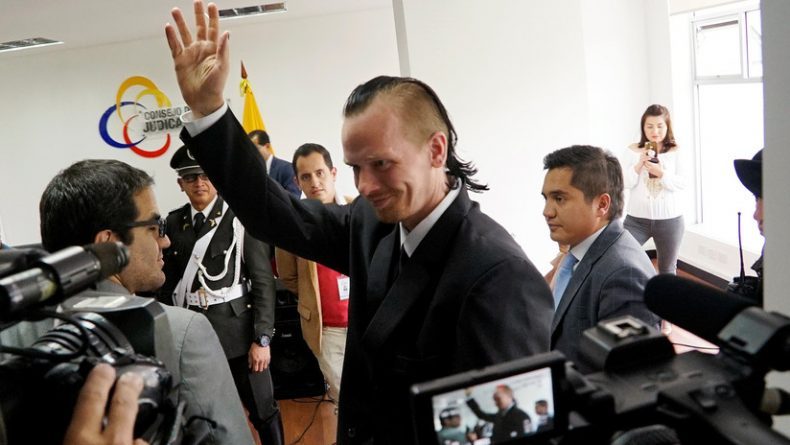 The hearing was requested by the defense of the cyber-activist, after he was denied bail at the end of May.

The Provincial Court of Pichincha, Ecuador, accepted the request of ‘habeas corpus’ from the Swedish citizen Ola Bini, so that the preventive detention against him can be lifted, after 70 days of detention. This decision will allow him to be tried in freedom

‘Habeas corpus’ was requested by the defense for Bini, a 37-year-old who has been linked to the founder of WikiLeaks, Julian Assange. The Swedish citizen is accused of allegedly attacking the integrity of computer systems in the country. The defendant will leave prison this Friday and will have to present himself every week before the Court.

The arguments at this Thursday’s hearing were presented by lawyers Mario Melo, Iván Escandón and Alejandro Baño, members of the legal team of the Regional Human Rights Advisory Foundation (INREDH).

The jurists argued that Bini’s detention was arbitrary and illegal; in addition, “he was not informed of the reasons for his arrest nor was there a legal warrant for imprisonment”.

They also pointed out that the Ecuadorian Public Prosecutor’s Office has not established what system Bini attacked, how he did it or when. Judge Yadira Proaño, who had to justify the arrest of the Swedish citizen, was not present at the hearing.

Lack of specifics
Bini has been detained in the Andean country since April 11, the same day that Assange was stripped of his diplomatic asylum and arrested by the British police.

According to his lawyers’ public statements, the case has not advanced much, due to the lack of evidence against the Swede.

So far, it is known that the Office of the Prosecutor of Ecuador presented as evidence against Bini computers, cell phones, books related to electronic ‘hacking’, external memories and USB cables; in addition to the records of his trips abroad and the payment of his internet accounts, which add up to around 230,000 dollars, from 2015 to 2019.

On May 29, Judge Proaño decided not to release Bini on bail because, it was argued, the Prosecutor’s Office has not specified the alleged damage caused by Bini, and therefore a bail amount can not be set.

Moreno and Romo to testify
The President of Ecuador, Lenin Moreno, and the Minister of the Interior, María Paula Romo were called to testify about the case. The hearing date was established for June 12, however neither appeared, but sent their statements in writing through their attorney.

The summons to Moreno and Romo was made at the request of Bini’s defense lawyers, Carlos Soria and José Charry, due to public statements made by these officials since the Swede was arrested.

Romo, the day of Bini’s arrest, told the press that he was “a person very close” to WikiLeaks who lived in Ecuador. He specified that the arrest was made “simply for the purpose of investigation.”

Meanwhile, Moreno, in a debate at the Inter-American Dialogue, a think tank specializing in Latin America, based in Washington (USA), in April, said that the Swede was caught ‘hacking’ government and personal accounts.

In addition, in an interview with journalist Patricia Janiot, the president explained that Bini “was found with evidence that will be analyzed”. He added that the young man “frequently visited Assange at the Embassy, he surely received instructions on what he had to do”.