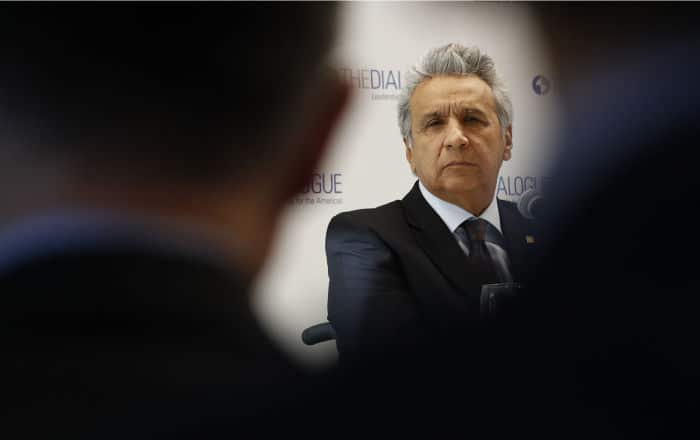 “Moreno became a CIA insider due to blackmailing… We are absolutely sure that while Moreno was in Geneva (working as the United Nations Special Envoy on Disability and Accessibility), he established a very close relationship with the CIA and the U.S. Administration because they may have found his secret bank accounts in Panama, opened by his brother to save money from corruption,” Patiño told Sputnik.

Deputy Ronny Aleaga, member of the now opponent Citizen Revolution party founded by former president Rafael Correa (2007-2017), filed documents with the Attorney’s Office on Anti-Corruption accusing Moreno of purchasing an apartment by means of bribery during his term as Correa’s vice-president.

“There is enough evidence about an unjustified patrimonial increase by the current President of Ecuador, Lenin Moreno, that materialized in the purchase of a high-end property in one of the most exclusive areas of Spain, in Villajoyosa, through shady companies located in tax havens,” Aleaga said in an interview.

The case was brought from “The Offshore Labyrinth of the Presidential Circle,” an investigative report released last February by local website La Fuente.

According to the report, Ina Investment Corporation is a shadowy firm tied to Moreno’s family group, initially founded by the brother of the President. Moreno has denied the accusations and claims that it is all a smear campaign on behalf of Correa’s allies to prevent their leader from going to jail.

In turn, Patiño said Moreno was probably collaborating with the CIA as early as December 2013, when he was appointed United Nations Special Envoy on Disability and Accessibility.

“The CIA and the U.S. must have found out about his secret account, which we had not heard about. We heard about it when he had already assumed the Presidency… We have been demanding for over a year to open up a case and, as usual, as Moreno is a first class trickster, he publicly said he would open the account when he had no other option. But the account has yet to be opened yet.” noted Patiño.

“He is part of Lenin Moreno’s intimate group, there is a clear tie here to the CIA…. When Moreno was vice-president, Michelena was his right-hand man and he is the only aide that has survived in his presidency,” Patiño added.

Moreno won elections as the candidate of the PAIS Alliance political movement, lead by Correa until last year. But Moreno drifted from the policies boosted by Correa and political trials have been opened against the supporters of the former president, as it is the case of former vice-president Jorge Glas or Patiño himself.

Since he took office, Moreno has reestablished closer relations with the U.S. Administration and agreed to a loan with the International Monetary Fund (IMF).

A first meeting between the Ecuadorean Government and the U.S. Agency for International Development (USAID) was held on August 13 after five years, as the Correa Administration expelled this agency from the country in 2014.

Ecuador is under a Criminal Dictatorship

“Arrests, persecutions, raids suffered by the (leftist) Citizen Revolution Movement are carried out only under dictatorships… I express our condemnation to a dictatorship that can only be branded as criminal. Even before the events occurred during the last weeks, it was already a dictatorship because the rule of law was not respected and human rights were abused. But it is now a criminal dictatorship because what they have done is killing people,” Patiño noted.

Seven raids and two arrests were made against members of the Rafael Correa political party since last week following 12 days of mass protests against the Government due to the elimination of fuel subsidies, among other economic measures.

The residences of the prefect of the Pichincha province, Paola Pabon, and former deputy and executive secretary of the Citizen Revolution Movement, Virgilio Hernandez, were raided by the police, and also the houses of other five people. Fortunately the Mexican Government provided shelter in its embassy in Quito to six people tied to the Citizen Revolution.

Correa’s lawyer Fausto Jarin told Sputnik last Wednesday that the Government of Ecuador is undertaking covert intelligence actions to monitor and persecute leaders of the Citizen Revolution, through arrests, raids, as well as harassment against the Mexican Embassy in Quito.

Authorities even raided the seat of his party, noted Patiño, recalling the arrest of Pichincha magistrate Paola Pabon.

“Even Hernandez has been forced to hide. The evidence they gathered was two cell phones, a couple of 20 dollar bills, and a key chain. They have not found one single bomb or a gun… They will never find it. They continue coming up with nothing but our comrades continue in jail. The protests resulted in at least 8 deaths and hundreds of injured and Ecuador was destroyed in the process,” Patiño commented.

According to him, President Lenin Moreno should call for elections and “go home” so that “the party can be in charge” of rebuilding the country.