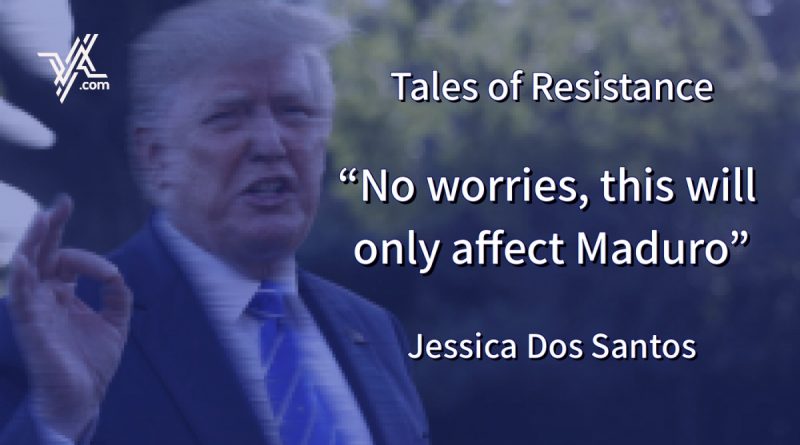 In the latest edition of “Tales of Resistance,” VA’s Jessica Dos Santos takes apart the fallacious idea that US sanctions only target Maduro and high-ranking officials.

In August 2017, the United States imposed for the first time (direct) financial sanctions “against the Nicolas Maduro government.”

It was the first time in 30 years that Washington resorted to this type of sanctions against a country in the western hemisphere (with the exception of Cuba).

At the time I was already talking about “sanctions against Venezuela.” I had my anti-imperialist feelings running high and a keen awareness of the direct and secondary effects that these measures could cause. For ten years I had done journalism covering the “collateral damage” caused by gringo actions.

Nevertheless, my pro-opposition friends and family insisted on correcting me time and again: “They’re not sanctions against Venezuela, they’re against stupid Maduro and his people [in the government]. How is that going to affect us?” All of them, with no exception, had bought the official line of the US government and the Venezuelan opposition.

At first sight, when individual sanctions were being levied, it seemed right. What do I care if the White House is forbidding high ranking officials from entering the US? Big deal! Let them take their kids to the “knockoff” Disneyland in Paris or resign themselves to “Bimbolandia” [theme park in Caracas] like me and everyone I know.

However, the 2017 executive order talked about “forbidding transactions with Venezuelan state or PDVSA bonds,” which effectively stopped companies from dealing with Caracas. The consequence was shutting off access to international credit markets and growing difficulties in processing any financial transactions whatsoever.

In due time, shortages of an endless number of necessary components in the medical and automotive fields became ever more acute. Straightaway, the sick and the dead were all from the pueblo. One way or another, politicians (in government or otherwise) and wealthy people had, and still have, the tools to save themselves or their families, such as having surgery abroad, for example.

Additionally, imports became a cycle of nightmarish triangulations which make everything more expensive. Naturally, these extra costs ended up hitting the pockets of the common people. The effects took longer to impact those with foreign currency incomes, but it struck the most vulnerable sectors very quickly.

The current official estimates put the total losses caused by US sanctions to the Venezuelan state at around 30 billion dollars. These include the seizing of [state oil company] PDVSA’s US subsidiary Citgo, and the freezing of 7 billion dollars in banks and financial institutions around the world.

Nevertheless, we Venezuelans are known for sorting stuff out. Therefore, when the time came to abandon our normal routines, that is, leave aside the work we had studied for, move out of our comfortable posts in formerly renowned companies, for example, to arrive at individual and/or collective solutions, we did it without blinking.

Some of us started, for example, to sell our labor almost for free to foreign employers. This way, we became the cheapest community managers, designers, accountants, etc. in the hemisphere.

Last time around, I had to resort to a friend’s account. Days after receiving the payment, my buddy told me his bank (following instructions from the Treasury Department) had frozen his account until he could prove where the money came from (I should clarify that it was less than $200). But “no worries, this will only affect Maduro,” right?

After this inconvenience, I went to try and open an international account from Venezuela. Not only was I given for an endless amount of conditions (including having more than two thousand dollars, a ludicrous sum for any Venezuelan), but in the end I was told to “forget everything you’ve been told” because I had, at some point, worked for the Venezuelan state. Just a worker. Not a president, a manager, simply a worker.

In Venezuela, there are over three million public employees and maybe not even half of those are Chavistas. But “no worries, this will only affect Maduro.”

As such, everyone started to realize that the discourse of Trump and the Venezuelan opposition was false, that in their desire to topple Maduro they are only out to seize of Venezuela’s resources and it doesn’t matter if that means more suffering for everyone else.

Although on some occasions, US officials have the necessary honesty to explain what the sanctions are all about. For one, former US Ambassador to Venezuela William Brownfield recognized in October 2018 that sanctions against PDVSA “would have an impact on everyone.”

“The best solution right now may be to accelerate the collapse, even if it will generate a period of suffering that will last months or perhaps years,” Brownfield openly admitted.

Nowadays, those very relatives and friends who called me a “fanatic” complain about the things we can no longer access, about the siege and setbacks on many fronts, because even Adobe Systems Inc. blocked us from using Photoshop, Illustrator, InDesign, Behance, you know, “to screw Maduro and make the government fall.”

Adobe’s decision became a trend on social media for countless hours because it affects precisely this middle class sector who earns foreign currency by working for foreign employers, the very group who blindly believed sanctions would only hit Maduro and even called for more and more sanctions with this idea that they would remove him.

By now, most Venezuelans have understood that sooner or later sanctions will cause more suffering to all of us. Some fear they will no longer receive the government-subsidized CLAP food box with the same frequency, while others worry because at any moment they will no longer be able to pay with their Bank of America credit card.

We don’t want any more “help,” only that they stop screwing us.