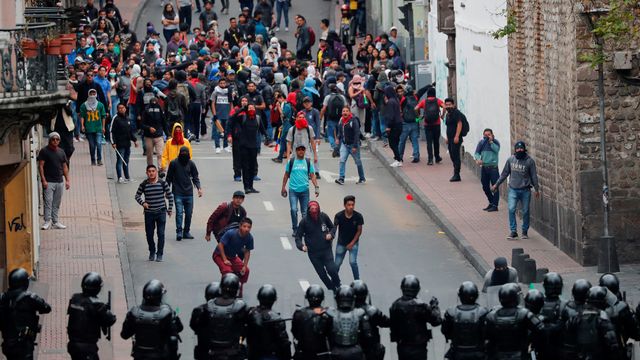 Ecuador has been rocked by a nationwide strike and widespread protests following the announcement Tuesday by the right-wing government of Lenín Moreno of an austerity package involving $1.4 billion in annual cuts.

The specific measure that unleashed the demonstrations was the elimination of gas subsidies, which went into effect at midnight Wednesday and increased gas prices from $1.85 to $2.30 per gallon and diesel prices from $1.03 to $2.27 per gallon.

Since Wednesday, transportation workers have been on strike. They have been joined by workers and students across the country, who have set up roadblocks and held demonstrations. The price hike is particularly incendiary in a country whose main product is petroleum, which accounts for 30 percent of exports.

The trade union confederation Workers’ Union Front (FUT), the Confederation of Indigenous Nationalities (CONAIE) and the Popular Front, which is led by the Stalinist Marxist-Leninist Communist Party of Ecuador (PCMLE) and includes the Federation of University Students (FEUE) and the National Teachers Union (UNE), among other unions and activist groups, called a national strike for Wednesday and Thursday.

This is the second major national strike this year after a five-day strike in July—the largest in 14 years.

Amid a global resurgence of the class struggle and protests against social inequality, including mass demonstrations in Hong Kong and Iraq that are also defying police state repression, protesters in the streets of Ecuador are demanding the repeal of the entire austerity package and the resignation of Moreno.

Since taking office, Moreno has sought to accommodate in every way the demands of global finance and, particularly, Washington. In a treacherous act, his government turned on WikiLeaks’ publisher Julian Assange, who had been granted political asylum in Ecuador’s London embassy to escape the prospect of a rendition to the US over his exposures of American war crimes. In April, Moreno repudiated the asylum altogether and invited British police into the embassy to drag Assange to a prison cell.

As in the rest of Latin America, the Ecuadorian ruling elite has responded to an end to the commodities boom in 2013 and a stagnating global economy by reversing previous improvements and attacking workers’ social rights.

Poverty and inequality are bouncing back and the economy is growing at a paltry rate of 0.2 percent per year, while “inadequate employment”—underemployment or employment for less than the minimum wage—has already jumped from 41 percent to 56 percent since 2014. The gas price hike is expected to sharply raise the prices of a whole host of staple goods.

Far from advancing a serious strategy to fight these social attacks by the Ecuadorian ruling class and its imperialist patrons, the political forces and trade unions leading the current strike are calling for a “gradual” approach and “national unity” to “give direction to this nefarious government,” in the words of Nelson Erazo, president of the Popular Front. These bankrupt appeals can only pave the way for the ruling class to turn more sharply toward military repression and authoritarian rule in order to impose its economic dictates.

On Wednesday night, Moreno suspended classes for Thursday and Friday at all schools and universities and responded to the spread of protests the following day by imposing a national state of exception for 60 days, involving the deployment of the military against demonstrators and suspension of the right to assemble and strike.

“With the goal of controlling those who want to impose chaos, I’ve ordered the state of exception at the national level,” said Moreno, who called demonstrators “coup perpetrators.”

Soldiers and police have used tear gas and violent charges with military vehicles against marches and roadblocks. Multiple videos on social media and corporate news outlets Thursday showed police on motorcycles running over demonstrators who were lying on the ground and kicking them, while beating up journalists.

The presidency issued a cynical communiqué Thursday “repudiating” the “incidents this October 3 against journalists and media.” The minister of interior, María Paula Romo, talked of “lots of false information and false videos circulating on social media,” implicitly threatening to impose censorship.

On Friday, the government reported that it had made 350 arrests, mostly in the country’s largest city, Guayaquil. The previous day, it had indicated that there had been 14 people injured, 215 blocked highways and 21,500 demonstrators mobilized in 281 places. These are likely underestimations.

At least eight of those arrested are charged with the “stoppage of public services,” which carries a jail sentence of up to three years. These eight include the national leader of the taxi drivers’ union, Jorge Calderón, and two union officials from Azuay province.

In parliament, opposition politicians demanded early elections and chanted, “This government is not nationalist, it’s a runner for the World Bank.”

However, any government led by the forces in the political establishment would advance the same policies. They backed and many are still aligned with ex-president Rafael Correa (2007-2017), who began the most recent wave of austerity programs demanded by Wall Street, which were imposed largely through emergency rule.

Correa’s initial “anti-imperialist” posturing was largely symbolic. After he declared that Ecuador’s debt was “illegitimate” and stopped payments in 2008, his government subtly bought back its debt, albeit at a lower price.

When oil and commodity prices fell and China refused to extend further loans tied to oil sales, the Correa government in 2014 issued $2 billion in bonds in foreign markets. It approved a $400 million loan from Goldman Sachs, sending Ecuador’s gold to New York as collateral, while reauthorizing IMF accounting operations in Ecuador and agreeing to a $1 billion loan from the World Bank.

One of Correa’s explicit promises as part of these deals was the elimination of gas subsidies. He boasted at the time that the World Bank “is behind us to give us financing because it admires our growth and political economy in the country.”

At the same time, as it has done since the return to civilian rule in 1979, the Ecuadorian ruling class is deploying the PCMLE, its fronts and its Pabloite allies in the Revolutionary Workers Movement (MRT) to subordinate protests to one or another sector of the bourgeoisie and military. The PCMLE split from the original Communist Party (PC) in 1964 once the PC began backing one CIA-backed military dictatorship after the other.

In the early 1980s, the PCMLE and MRT joined the Progressive Parliamentary Bloc formed by the PC and the bourgeois party Democratic Left (ID), which included a layer of former officials of the military dictatorships.

The Stalinists’ politics based on backing various factions of the national bourgeoisie were rooted in Moscow’s reactionary nationalism and its policy of “peaceful coexistence” with imperialism. However, after the dissolution of the USSR in 1991, the Stalinist parties either dissolved or integrated themselves even more directly into the bourgeois political establishment.

In 2002, the Ecuadorian Stalinists and their new indigenous-nationalist allies in the CONAIE and the Pachakutik party joined the bloc that brought Colonel Lucio Gutiérrez to power. Gutiérrez soon after proclaimed himself the “best friend” of the Bush administration and continued the IMF programs. The PCMLE then gave electoral support to Rafael Correa and joined Correa’s reelection coalition in 2009, before adopting an oppositional stance while continuing to suppress the class struggle through its trade unions and protest groups.

In 2016, the PCMLE formed the anti-Correa National Agreement for Change, which includes the MRT and is led by the Democratic Left. The PCMLE then veered further to the right, and in the 2017 elections it called for a vote for the right-wing banker Guillermo Lasso to “get Correa out,” that is, to oppose the election of Correa’s hand-picked successor, Lenín Moreno.