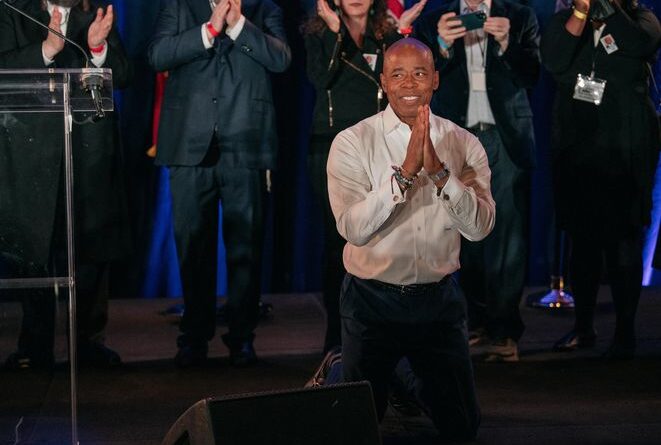 Black politicians may be openly conservative or pretend leftists but their constituents rarely get what they need. Politics absent a mass movement is a recipe for inaction or even outright betrayal.

Election day is treated with great fanfare in this country. Citizens are propagandized into voting for the sake of voting and are shamed if they don’t. Black people who question the value of the process are under particular pressure. “People died so that you could vote,” and other exhortations cheapen the memory of the liberation movement which sought to guarantee human rights for Black people. While casting a ballot is seen as a quasi-religious duty, the development of mass movements that are the foundation of all important political change is actively discouraged. The result are electoral victories for politicians that often spell defeat for the voters who are propagandized to put them in office.

The mayor elect of New York City is Brooklyn Borough President Eric Adams. He will be the city’s second Black mayor in large part because he raised millions of dollars. Adams speaks favorably of the business community, hence the campaign haul, and real estate developers and other wealthy New Yorkers made clear he was their choice. Fundraising prowess is always an indication that the people’s needs will not be met.

Adams is a former police officer and also speaks favorably about the police, even as movements for abolition and community control are popular among many Black New Yorkers. But Adams has said he will bring back some iteration of the awful stop and frisk policies of the Bloomberg administration years. His victory is certainly no victory for people who are driven out by gentrification, targeted for police abuse, and dependent upon low wage work when they can find it.

The Adams campaign was openly conservative but others provide a pretense of left politics with virtue signaling and sloganeering but absent any much needed change. This class of politicians may call themselves progressives, democratic socialists, the Squad, and other iterations.

There are Congressional Black Caucus (CBC) members such as Jamaal Bowman and Cory Bush who defeated incumbents in primaries. Like other “progressives” in congress they “talk the talk” in social media posts declaring their support for medicare for all or relief from student loan debt but they never buck the system. As the Build Back Better scam winds down to providing the tiny gains it was always meant to deliver, the so-called progressives have gone along for the ride.

Democrats would not have chosen multimillionaire Nancy Pelosi to serve as Speaker of the House of Representatives if they had any intention of doing the things that the majority of voters want. She and the rest of the leadership such as CBC member James Clyburn routinely and publicly dismiss progressives with Clyburn famously saying he didn’t know any socialists. His point was clear. Anyone with leftish inclinations had better stay quiet and not rock the boat.

The same process plays out in local races as well. In Buffalo, New York the four-term incumbent Black mayor lost his primary race to India Walton, who calls herself a socialist. The misuse of that term plays a big part in confusing people. A socialist wants to nationalize the banks and provide free health care and cut the military budget significantly. A socialist wants to expand all safety net programs and regulate major industries. A socialist would get rid of charter schools and cut the prison population. Socialists want the public to control utilities and higher education and provide things previously unheard of such as free public transportation.

Despite the fact that the odds of her actually following through with socialist programs were slim, Walton’s victory sent democrats into a panic. As soon as she won the democratic primary, the city council announced an intention to reduce the power of the mayoralty. Her defeated opponent, Byron Brown , didn’t step aside when he lost his party’s nomination. Instead he launched a write-in campaign and with the help of republicans successfully held on to his mayoralty.

The ham fisted efforts to ensure Walton’s defeat were intense. The chair of the New York State Democratic Party declared that endorsing primary winners was not a necessity. He created controversy when he compared Walton’s victory to that of KKK leader David Duke running as a democratic in New York and winning. Of course he had to back track on the Duke analogy but he steadfastly maintained that every winner need not get the party’s endorsement.

Not to be outdone with a questionable statement, former governor David Paterson said, “As an African American, socialists and communists have been working on the African American community going back to the ‘30s, ‘40s and ‘50s. They almost wrecked the civil rights campaign of Dr. Martin Luther King. He finally had to throw some people who had communist affiliations out of his movement. … I’ve been somewhat surprised that they have made inroads in communities [of color] that certainly need what they’re talking about, but there’s no record that they’ve ever delivered it. Not in this country or anywhere else.”

Paterson’s remarks showed the true colors of the Black political class and their determination to stamp out left politics. Paterson and others know quite well that the liberation movement was most successful when the people made demands and didn’t care what politicians wanted them to do or to say. They know that socialists are responsible for the little bit of relief from capitalist predation that exists in this country. Left politics would win if allowed to flourish, and no one knows that better than the people who like the system just the way it is.

Sadly, the hard work of politics has been subordinated to elections. Black politics are diminished in a system that creates a white people’s party and a black people’s party. Keeping republicans, the white party, out of power is seen as the end all and be all of political action. When the democrats are represented by Black office holders the deception is magnified.

The demonization of even a little bit of progressive talk is a sign that the system lives in fear that someone may come along who will actually fight for change. A mass movement is an existential threat. That is why each newcomer is taken down as soon as they emerge. The possibility that someone may actually be serious about doing the peoples’ business instead of representing corporate interests and petty tyrant political oligarchs cannot be allowed.

There are elected officials worth keeping in office and issues worth voting for but showing up at the polls is not an end unto itself. It should always be seen as the first step in political action, and not the last.