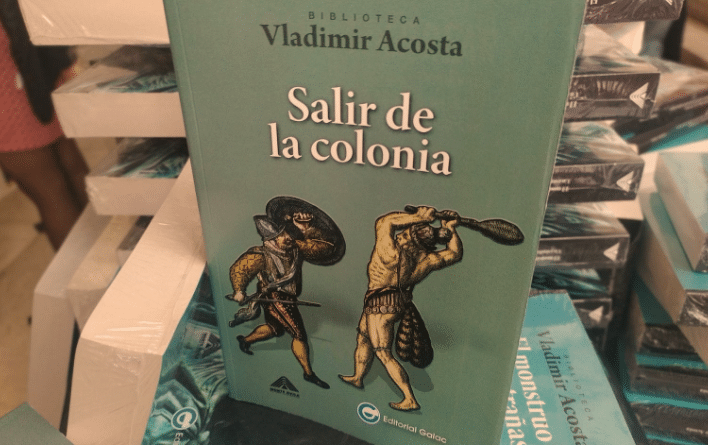 Venezuelan intellectual Vladimir Acosta was honored at the 17th International Book Fair of Venezuela (FILVEN), where he explained the content of one his four books, Leaving the Colony.

Acosta, speaking on the role of Catholicism both during colonialism and now under US imperialism, commented that “today we can see how a religion was used to impose culture and language on us. They took our consciousness from us. In three years we will be celebrating the bicentennial anniversary of the battle of Ayacucho, which was the decisive moment in the fight against Spanish colonialism, but we have to keep fighting. Now we are up against US imperialism.”

The author, who has always described himself as an atheist, maintains that religion has been indispensable in the domination of other peoples and that it justifies the ruling classes, especially in the case of Indigenous struggles.

His book is an invitation to break with the colonization and colonialism of the past—two concepts which, for Acosta, should not be used interchangeably.

The book was edited by Monte Ávila Editors and by the Galac Foundation.

“The great problem has been the unfortunate failure of The Liberator (Simón Bolívar), with his dream of the Great Fatherland,” Acosta said. “All of Latin America, except for Brazil, faced up against the enemy. It was Latin America against the Europeans. Bolívar, as president, could not wage war on that many fronts. But he could fight for Sucre in what is now Bolivia. After independence was gained, that dream for Latin America fell apart. The Congress of Panama wasn’t what some had hoped. Bolívar knew that afterward there would be anarchy with all of the different factions clamoring for their small nations. Central America was divided up into smaller countries.”

“Then the 20th century came, a disaster for Latin America,” Acosta continued. “We were divided during the whole century, the United Kingdom took advantage and stole territories from us. The US invented Pan-Americanism, they showed their intelligence in leveraging the situation, in the end they were able to make all of the countries in America go to Washington to join them. They are the ones really manipulating the situation. Since 1910 they invented several organizations, which eventually crystallized into the Organization of American States, founded in Bogotá in 1948. They always invoked Bolívar and the idea that they had to protect us from a possible Soviet invasion, but it was more likely that aliens would invade us than the Soviets! The true enemy is the US. In fact, Reagan bombed the port of Managua (Nicaragua) and the Sandinistas demanded that the International Criminal Court prosecute the US. The US, in spite of losing the case, said that they only follow their own rules and that they even apply their own rules in other countries.”

In the writer’s opinion, “the United Kingdom today is a US colony. They still think they are an empire but they are a joke, they take orders from their former colony, but they act like they can challenge China and Russia, while the United States is a crumbling empire with a declining economy.”

He also took a moment to present his perspective on the ways in which the Spanish have used Ibero-Americanism as a tool of manipulation, from the moment they set foot in America. The arrival of Columbus resulted in savagery, but the 12th of October is a national holiday in Spain.

Acosta also commented on how the Ibero-American project is fascist and anticommunist, which can be seen in factions of the Venezuelan opposition like María Corina Machado. Spain still thinks it is powerful despite not having a single colony, added Acosta, and as a result it has now returned to Africa.

The forum was concluded with the official presentation of the book.