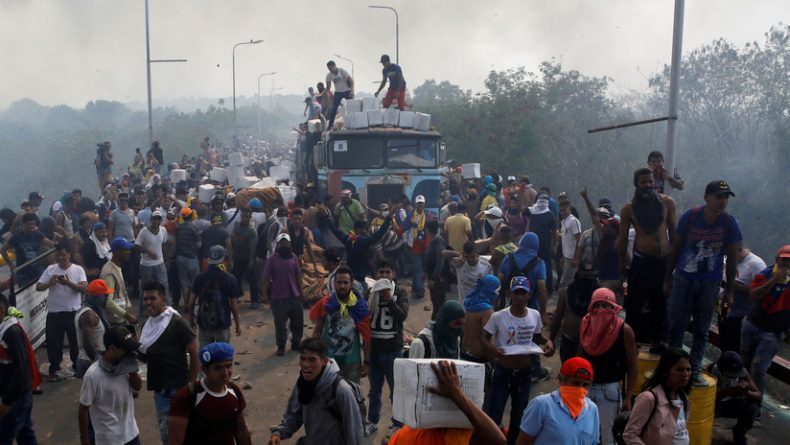 This was stated by the community spokesperson for Foreign Affairs and Security Policy, Maja Kocijancic.

The European Commission (EC) has indicated on Monday that “we must avoid” a military intervention in Venezuela, following statements in which the opposition deputy Juan Guaidó was in favor of maintaining “all options open.”

The community spokesperson for Foreign Affairs and Security Policy, Maja Kocijancic, said at a press conference that “the position of the EU in this context is very clear: We must avoid military intervention .”

On the other hand, it is expected that the Vice President of the United States, Mike Pence, announce on Monday “concrete steps” and “clear actions” to face the crisis in Venezuela, during the meeting of the regional leaders of Latin America. They are part of the so-called Lima Group, which Guaidó will attend. This was stated by a senior government official, who declined to go into detail about the new measures, according to Reuters .

The possibility of a military intervention in the South American country has increased after the failed attempt to force entry into Venezuela of “humanitarian aid” from the United States that took place this Saturday, with the endorsement of Colombia. Guaidó had previously reiterated his call to the Bolivarian National Armed Forces (FANB) to ignore the authority of President Nicolás Maduro and allow the entry of vehicles. For its part, the Venezuelan government expressed its refusal to admit 300 tons of inputs from the United States,  arguing that it would be the first step towards an intervention in the country.

The acts of violence that took place during the day began when three FANB soldiers took two tanks, broke into the border security cordon of Venezuela on the Simón Bolívar Bridge, 10 kilometers south of Tienditas Pass, They ran over two people and were received on the Colombian side by the Venezuelan deputy José Manuel Olivares.

“The events of today force me to make a decision: to pose to the international community in a formal way that we must have all the options open to achieve the liberation of this country that is fighting and will continue to fight, ” said Juan Guaidó on Saturday in a tweet that has generated international alarm.

The position of the European Union
It is not the first time that the European bloc has remonstrated against possible military intervention. Earlier this February, the High Representative of the EU for Foreign Policy, Federica Mogherini , began the meeting of the International Contact Group, meeting in Uruguay, noting that it is “fundamental to avoid internal violence and external intervention ” in Venezuela and “open a path for a credible political process leading to early elections” in the country.

The European Parliament recognized Juan Guaidó at the end of January as “legitimate interim president” of Venezuela, the same day Mogherini announced the creation of an international contact group to help solve the political crisis in the Latin American country, with an explicit objective: “It is to allow Venezuelans to express themselves freely and democratically through new elections”.

A few days later, on February 4, the head of European diplomacy stressed that the recognition of leaders from other countries “is the competence and prerogative of the Member States” and not the EU. On that date, a total of 19 European countries, including the United Kingdom, Spain, France, Sweden, Denmark, Austria, Germany and Portugal, had already recognized the opposition leader.