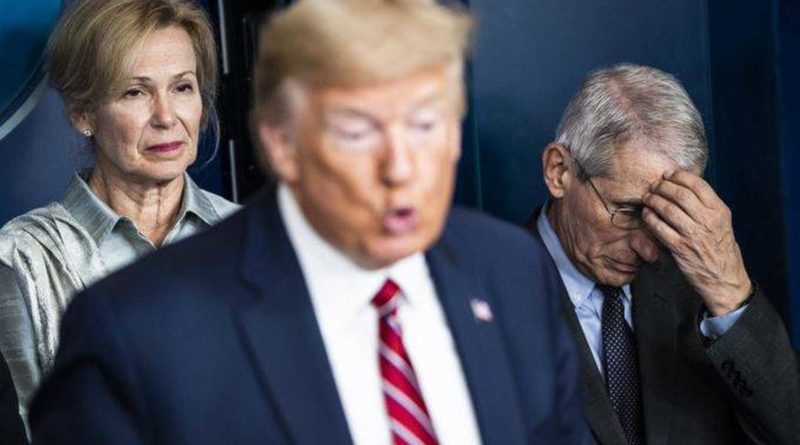 This coronavirus pandemic will be remembered for many reasons, and one of them will be the controversial and extravagant way Donald Trump has handled the crisis in the United States.

Trump’s unusual suggestion last week that injecting disinfectant could serve as a treatment for covid-19 sufferers has become an example of his overall response to the health challenge.

Trump later tried to downplay his comment, stating that it was sarcastic, but watching the whole video of his statement leaves room for doubt and health experts saw it as a risk. An increase in calls to poison control centers in the US were reported, although without fatal cases.

That was not the first time that Trump has been accused of acting dangerously in the pandemic: something similar happened when he announced this month that he would suspend US funding to the World Health Organization (WHO).

And at the end of February the president generated concern when he tried to relativize the threat of the new virus, arguing that it was “like a flu” and that it was going to disappear like a “miracle” , although later he said that he knew of its seriousness but sought to “give hope to the people.”

The USA today is the country with the most cases of coronavirus in the world and Julian Zelizer, a presidential historian at Princeton University, stresses that Trump performs in this crisis in a “chaotic way” and differently from his predecessors.

This handling of the emergency “is dangerous for the country and for the world, because this is a global crisis,” says Zelizer, author of several books on modern political history in the US, in an interview with BBC Mundo.

What follows is a synthesis of the telephone dialogue with this professor of history and public affairs, a leading analyst of current US politics.

How would you define President Trump’s handling of the coronavirus crisis?

I define it as chaos.

It is one thing to talk about presidents struggling to respond adequately to a pandemic or other crisis, and that has obviously happened: not all presidents do things right; they make mistakes along the way.

But this has been a combination of misinformation, with a kind of random attack and persistent resistance to taking the steps that the scientific community asks for, in an ad hoc, truly chaotic manner.

I see no other way to characterize what we have witnessed in recent months.

After Trump spoke about injecting disinfectant into people, you commented that he does not seem to understand the reality and that this is dangerous, because he is the president of the United States. But how dangerous and for whom exactly: for his government, for the US, for the world?

It is dangerous in two ways.

The most obvious and immediate danger would be to anyone who accepts his suggestion – if that gets to someone’s mind – either specifically what he said or all kinds of false dangerous cure recommendations out there. That’s dangerous.

But more dangerous is that it distracts attention from what serious people are saying we must do as a nation.

And so, every time you inject that into public discourse as opposed to everything else, from social distancing to careful reopening (of the economy) and how it should be done, it consumes valuable time.

People focus on that and his own administration then has to clarify what he says, instead of working around the clock on vaccine tests, and so on.

So at that level it is dangerous for the country and for the world, because this is a global crisis, it is not a national crisis.

As a presidential historian, how would Trump’s handling of this emergency compare to how other US presidents have responded to different crises, be it the national security crisis of September 11, 2001 or past economic and financial crises?

This is one of those distinct elements of the Trump presidency.

Again, there is a long history of presidents who do not do the right thing or make mistakes.

For example, many criticize President Woodrow Wilson for not having done enough with the 1918 flu.

There are criticisms of President (Bill) Clinton and George W. Bush for not doing enough to respond to the warnings before 9/11.

RELATED CONTENT: “The US Does Not Need a War in Venezuela”: Hard Hitting Editorial Directed at Trump (Pittsburgh Post Gazette)

But in all those cases, once a crisis has occurred and mistakes have been revealed, a certain level of governance occurs. Even with President Bush: a focus on politics, an effort to communicate.

We have seen in times of war, with FDR (Franklin D. Roosevelt) during World War II, an effort to mobilize government resources to overcome the crisis. And that is not really what we are seeing now.

There is no serious government commitment, the President is not really committed to bringing the best and brightest people to the room, and he has not mobilized resources in the way that many are needed.

So that, combined with what we just talked, about disinformation and strong criticism, makes this a very different time for the nation: to be in a total crisis and to have such a leader at the same time.

Do you think that managing a crisis is an opportunity to unite the nation and generate empathy with the people as the country’s leader, and that is lacking at this time?

But beyond all that, there is also the inability to use traditional government tools, which means a president’s ability to have top experts guide him on what to do.

Having a stage not only to try to calm the public but also to provide information that resonates with what experts say, or for the President to mobilize resources.

A president has all these government tools that he (Trump) has not used at all.

And then there is the emotional part, where he hasn’t shown the kind of calm and empathy that we traditionally expected at moments like this.

Now both he and his supporters can argue that this crisis is unlike any other view in the past and that no president or government was really prepared for it. Is this not true?

Generally, we are not fully prepared for what happens. And once the crisis occurs, even if we were not prepared or if other presidents were part of what happened, the leaders must take responsibility.

But the second part is that there were elements in this case where the president clearly could have done more. Not that all this broke out in March. Actually, it was obvious and they told him that the problem already existed in January, and we’ll see if it was even earlier.

So there were steps he could have taken earlier, in terms of working on the tests, of the social distancing that came much later, and of financing government units that had problems last year and are essential now.

Those were things we could see. And he didn’t see them. That is not a collective failure. It is more. A failure of the president.

How much do you think this crisis and Trump’s response have damaged his chances for reelection?

This clearly hurt him a lot.

No one is politically stable at this time. But this has hurt him. His approval is not good. It has worsened beyond the initial week (of the crisis), the public does not trust him to handle this.

It is never good to be president when the country closes economically and people do not live normal lives.

So there is plenty of evidence that this is not helping him in any way and could even cost the Republican (Senate) control. It is certainly hurting them and making it harder for them to win reelection.

With that said, we’ll see with (Democratic pre-candidate Joe) Biden. Who knows what will happen in the coming months. No candidate is invulnerable.

And there is a question of what the choice will be like. If we are socially distant and still concerned about Covid-19, it could be a very low turnout, which would benefit the President.

So this hurt and damaged him. But that does not mean that it will lose in November.

Featured image: President Trump holds one of many news briefing on the coronavirus outbreak at the White House. (Leah Millis/Reuters)