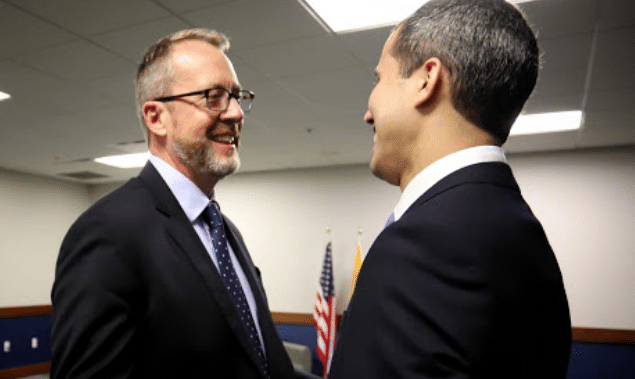 Since last Friday, several leaders of the Venezuelan radical opposition have met in Bogotá with US Ambassador James Story. The diplomat is supposed to be the administrator of Washington’s interests in Caracas, but works out of Colombia.

These confirmed meetings are held with all the formalities including an organized protocol proscribing a rigorous schedule of activities.

Jorge Rodríguez, president of the National Assembly, warned of these maneuvers last week. This Monday he confirmed the news with the attached image of an official page of the meetings.

Leopoldo López, Julio Borges, Manuel Rosales and Carlos Vecchio were invited to these meetings. As mentioned by Rodríguez, the caciques of Venezuelan extremism would come to “take the line.”

“They will plan new sanctions against the people of Venezuela, conspiratorial and violent actions,” said Rodríguez. “They [the gringos] will tell them if they give them permission (or not) to participate in the elections for governors,” warned the head of parliament.

The meeting is held at the Marriott Hotel in Bogotá, with a meeting agenda included, as shown in the tweets of the Chavista deputy. The points for Monday, February 22 are:

• Can the opposition unify in the fight for electoral conditions?
• How to build a civic-political pressure movement to be able to negotiate a transition from a position of strength?
• How to expand the democratic coalition?
• Who are we missing and how do we get to them? What is the role of each sector?
• What (sic) are the incentives for a comprehensive and successful negotiation (carrot and stick)?
• What is the role of Norway?
• Who should be the international guarantors or mediators?
• Who are the interlocutors on both sides?
• etc.

According to published documents, anti-Chavista leaders are scheduled to meet with various Washington officials, specifically with the White House Security Council, the State Department’s Office of Western Hemisphere Affairs, the Treasury Department, and the US Department of the Treasury. United States for International Development (USAID), to discuss, among other issues, the strategy of building a civic-political movement, the conditions in Venezuela, and the role of the international community.

Tutored opposition
Rodríguez questioned the “national” attitude of this Venezuelan opposition, which diligently goes to James Story “wagging its tail.”

“Never before in the history of Venezuela has there been a case of a political class so… kneeling to the designs of a foreign representative, which persists in its criminal attempts from the Trumpist times,” wrote Jorge Rodríguez.

The document with the agenda for the meetings was obtained by the head of the legislature from a Duque official “outraged that this is happening on his soil.”

The suspicion that plans against Venezuela are agreed to in these meetings is not a daring speculation. Following Leopoldo López’s meetings in December last year in Bogotá, a plan was hatched to place explosives in the Venezuelan National Assembly.

This last plot was dismantled and the person in charge of it revealed the details of the plan that tried to prevent the installation of the parliament and assassinate the elected deputies on December 6, the day of its inauguration.