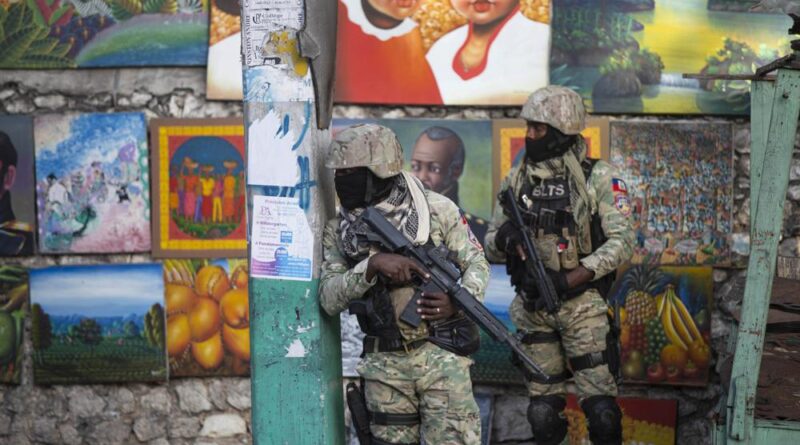 UPDATE: On the evening of Friday, July 9, Haitian government officials announced they had requested that the United States dispatch military forces to their country, ostensibly to protect ports, airports, gasoline reserves, and other facilities. The White House said the Biden administration would be sending FBI and Department of Homeland Security officials to Haiti right away; neither the State Department nor the Defense Department have yet confirmed what forces may be deployed.

In the pre-dawn hours of July 7, the president-turned-dictator of Haiti, Jovenel Moïse, was gunned down in his home by assassins. Two men now make dueling claims to be prime minister—and thus head of government. Many Haiti observers warn the stage may be set for the U.S. to resume its long history of intervening in the country’s internal affairs. It all adds up to more chaos and suffering for the people of Haiti, whose fate has for generations been subject to the whims of imperial powers and local comprador elites.

Moïse, the son of a banana exporter, first ran for president in 2015 and supposedly won, but the results were thrown out after fraud allegations. He finally became president in February 2017 following new elections, which saw just 21% of skeptical voters turn out. He was the candidate of the center-right Haitian Tèt Kale Party and hand-picked successor of former U.S.-backed President Michel “Sweet Micky” Martelly.

Pledging to combat the corruption endemic to Haitian politics, Moïse eventually became a symbol of it himself. A 2019 report from Haiti’s inspector general’s office accused Moïse of essentially stealing millions of dollars from the savings generated by cheap oil and low interest rates from Venezuela’s PetroCaribe assistance program. Auditors found that the president was involved in “collusion, favoritism, and embezzlement.” When two separate companies owned by Moïse had billed the government to build the same road before he took office, it was alleged that he and Martelly schemed to divert government funds to Moïse’s election campaign through double-billing and suspect contracts.

Never had popular support
In a country where 60% of the population lives in extreme poverty, COVID-19 runs rampant, and destruction from a major earthquake more than a decade ago and 2016’s Hurricane Matthew still goes unrepaired, the Moïse government never enjoyed much popular support. As if power blackouts and unreliable public services didn’t make daily life hard enough, though, the near-surrender of Haiti’s streets to violent gangs—including some allegedly beholden to the president himself—turned poor and working-class Haitians against Moïse even further. Almost from the time it took office, his administration was beset by protests.

Legislative elections due in late 2019 never happened, and in January 2020 Moïse completely dismissed parliament—announcing he would rule by decree. In all but name, he made himself the dictator of Haiti. When his own term was scheduled to end in February this year, Moïse declined to step down, using the pandemic as an excuse to postpone elections to some unknown future date. Meanwhile, he pushed constitutional amendments that would allow him to stay in office even longer, established a new political police force, and officially designated anyone who protested against the government a “terrorist.”

His assassination has left Haitians at home and in the diaspora conflicted and uneasy about what could come next. Few have much sympathy for Moïse, but the uncertainty of what will happen now is generating widespread fear. Jean Numa Goudou, head of a Haitian newspaper in Montreal, told CBC Wednesday, “It’s not like Jovenel Moïse was the only problem and that once he’s gone all the problems will be fixed.” She said that “some thought there would be people in the streets—either happy, sad, or angry—but there’s none of that.”

No one even knows who has a legitimate claim to power now. The constitution says the chief justice of the Supreme Court is to assume the presidency in the event it becomes vacant, but he died of coronavirus just days ago. Prime Minister Claude Joseph has claimed power and declared a “state of siege.” In a further twist, though, Moïse had already decided Joseph was to be removed from the premiership on July 8—the day after the assassination—and replaced by another politician named Ariel Henry. Henry, too, now declares himself prime minister.

Allowed to abuse his power
The political climate in Haiti that allowed Moïse to accumulate and abuse his power, according to Caribbean politics Professor Kevin Edmonds at the University of Toronto, was created “by a series of harmful political interventions by the U.S.A. and Canada.” Jean Saint-Vil, a Haitian activist, was more direct, telling the Toronto Star that Moïse was a “foreign-imposed puppet” and “not a recognized elected Haitian president.”

Saint-Vil is one among many concerned that the power vacuum left by Moïse’s killing will open the door for fresh intervention by the United States and other imperial powers. History provides plenty of reason to assume it could happen.

Ever since being established as the first free Black republic following a 1791 slave revolt against French colonialism, Haiti has been a target for imperial intervention by the U.S. and other powerful states. In the 20th century, this translated to outright U.S. military occupation for almost 20 years on behalf of American banks who were owed money by the Haitian government, multiple U.S.-backed coups afterward, and support for bloody dictators like François “Papa Doc” Duvalier and his son, Jean-Claude “Baby Doc” Duvalier.

Haitians elected left-wing liberation theology priest Jean-Bertrand Aristide, who pledged to fight poverty and underdevelopment, to the presidency in 1990. He was overthrown by the military a year later but returned to power from 1994 to 1996—at the time with U.S. support under the Clinton administration. In office, Aristide initiated a mass literacy program and moved to unseat corrupt regional officials. He was elected again in 2000 vowing to get reparations from France over colonial burdens but was kidnapped by U.S. forces in 2004 on the orders of President George W. Bush’s State Department and forced into exile.

RELATED CONTENT: What’s Behind the Assassination of Haitian President Moïse?

A series of rotating presidents over the years that followed eventually resulted in Moïse’s rise to power. Though Moïse enjoyed the support of Donald Trump when the latter occupied the Oval Office, Haitian refugees and migrants could count on no such favor, as they were frequent targets of Trump’s anti-immigrant assault. The administration of President Joe Biden has been less up-front about where it stood with regard to Moïse’s dictatorial turn, though there has been increased opposition in Congress for U.S. support to the Haitian government.

New U.S. intervention possible
Washington’s initial reaction to Moïse’s murder indicates that more aggressive intervention could be under consideration. The White House’s first official statement simply pledged that the United States “stands ready to assist” Haiti; the State Department says it is on standby and prepared “to receive additional requests from Haitian authorities.” While the situation in Haiti is chaotic, based on past history, few believe U.S. interference would yield positive results for the people of the country.

The next days and weeks will be dangerous. Within 24 hours of the assassination, Prime Minister Claude Joseph announced that four of the murderers had apparently been killed by police and two others taken into custody. Information as to who they were, what their motives might have been, or what forces they might have been operating on behalf of remain unknown.

Reportedly, the assassins forced their way into Moïse’s home disguised as U.S. Drug Enforcement Agency officers and spoke both Spanish and English. Speculation is rife as to whether the street gangs, corrupt business interests, Moïse’s domestic opponents, or foreign actors might be behind the hit. Given the skill of the killers’ tactics and the expensive weaponry and equipment involved, however, no one thinks this was an amateur operation.

Whenever elections are eventually held in Haiti—if they are—Professor Edmonds says the major capitalist states have to stay out and allow the Haitian people to decide their own future, “even if it conflicts with the interests of…mining, banking, and oil and gas industries.” For that to happen, grassroots activists in the United States will have to join the demand that their own country not intervene, whether militarily or behind the scenes.

C.J. Atkins is the managing editor at People’s World. He holds a Ph.D. in political science from York University in Toronto and has a research and teaching background in political economy and the politics and ideas of the American left. In addition to his work at People’s World, C.J. currently serves as the Deputy Executive Director of ProudPolitics.

Featured image: Soldiers patrol in Pétion-Ville, the neighborhood where the late Haitian President Jovenel Moïse lived in Port-au-Prince, Haiti, July 7, 2021. Moïse was assassinated in an attack on his private residence early Wednesday, and first lady Martine Moïse was shot in the overnight attack and hospitalized. | Joseph Odelyn / AP