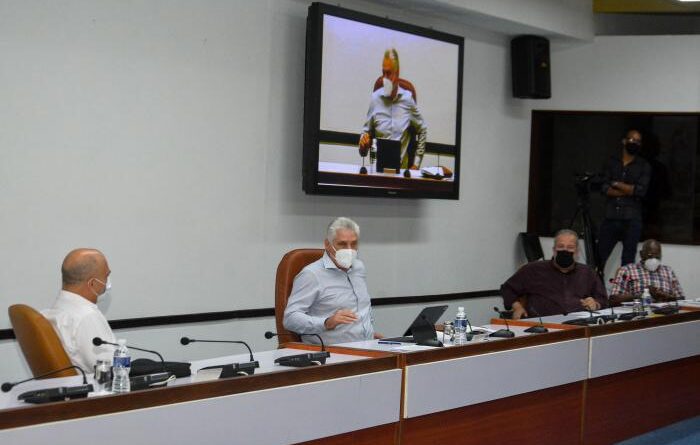 Results of clinical trials of this combination of Soberana candidate vaccines were announced yesterday at a meeting of the government’s COVID-19 task force, led by First Secretary of the Communist Party of Cuba Miguel Díaz-Canel Bermúdez

The combination of two doses of the candidate vaccine Soberana 02 and one of Soberana Plus, administered in a 0-28-56 day regimen, was found to have an efficacy of 91.2 percent, in preventing symptomatic cases of COVID-19, reported Dr. Vicente Vérez Bencomo, director of the Finlay Vaccine Institute (IFV), at Thursday’s meeting of the Cuban government’s COVID-19 prevention and control task force.

The First Secretary of the Communist Party of Cuba and President of the Republic, Miguel Díaz-Canel Bermúdez, congratulated the IFV and other institutions that participated in the creation of Soberana, “a result,” he said, “that is an indication of how hard our scientists have worked.”

Dr. Vérez recalled that the announcement comes exactly 415 days (59 weeks) after the President of the Republic met with a group of scientists at the Cuban Neurosciences Center (Cneuro) and requested that they develop a Cuban vaccine against the SARS-CoV-2 virus.

Referring to the meeting at the Center for Genetic Engineering and Biotechnology, a few weeks ago, when the 92.28 percent efficacy of the Abdala vaccine candidate was announced to workers there, Diaz-Canel recalled that he made the request with the conviction that Cuban scientists would succeed.

It was necessary, he pointed out, at the time, to have our own vaccines to achieve sovereignty in the COVID-19 battle, convinced that “Poor countries are not going to be able to have, on short order, the available vaccines that the rich world is producing to prioritize the rich.”

He recalled that the result was validated in phase 3 of the clinical trial carried out in eight municipalities of Havana, precisely when the strain originally detected in South Africa (Beta), “considered a “the beast” in terms of resisting vaccines against SARS-CoV-2,” was circulating within the capital.

The characteristics of the Beta strain, however, are not the same as those of the Delta strain detected in India, which, the IFV leader noted, is highly contagious, but much more susceptible to vaccines.

On Thursday afternoon, the Institute’s staff gathered to celebrate the successful results welcomed by all of Cuba.

As Dr. Vérez Bencomo pointed out in a previous meeting with the country’s leadership, IFV scientists are only halfway there; “We still have a lot to do, and we will not rest until the entire population is immunized with Cuban vaccines.”