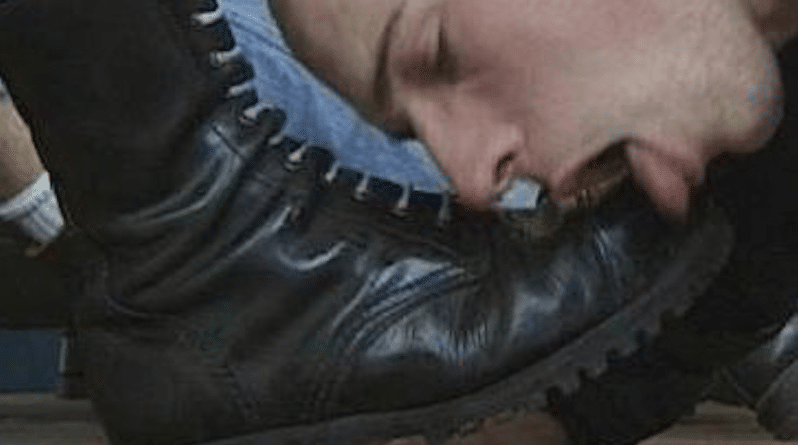 As protests against police brutality are met with an unceasing barrage of police brutality, the obsequious bootlicking copologia in online discussion forums has been cranked up to eleven.

I’ve written a couple of articles touching on the police assault and hospitalization of 75 year-old lifelong peace activist Martin Gugino, and the bat shit insane arguments I’ve been encountering to justify this self-evidently unjustifiable occurrence have been absolutely jaw-dropping. People have been using some of the dumbest arguments I’ve ever seen on the internet to claim Gugino staged his injury. They’ve been spamming a bogus article by the odious disinfo blog The Conservative Treehouse which claims, citing literally no evidence whatsoever, that “Gugino was attempting to capture the radio communications signature of Buffalo police officers”, assuming on no basis whatsoever that the septuagenarian would need to be within touching distance of the police in order to do such a thing.

Mostly, though, they’ve been saying that Gugino deserved to be shoved by the officers.

“He shouldn’t have gotten in their path!” they object.

No, bootlicker, it’s not okay to assault someone just because they’re in your way and you’re wearing a badge. Don’t shove people, much less senior citizens who could be injured and die. You should have learned not to shove people in preschool.

“Well obviously if you get too close to the police moving around like that they’re going to give you a shove,” they argue.

Yes, yes police do often physically assault people for inexcusable reasons. Thank you for confirming the problem the grownups are trying to solve here. Stop interrupting adult conversations designed to accomplish that.

Why do people do this? Why whenever there’s a video of police brutality, no matter how clearly and obviously wrong it is, are there always people falling all over themselves to try and justify or spin it as something acceptable or illusory? Literally always, without a single, solitary exception?

One reason is because of a glitch in human cognition known as the just world hypothesis or just world fallacy, which causes us to assume that if bad things are happening to someone, it’s because that person deserves it. Blaming the victim is more psychologically comfortable than seeing that we live in an unjust world where we could very easily become victim ourselves someday, and we select for that comfort over rational analysis. It allows us to feel as though we’re in control of our fate.

In the early 1960s a social psychologist named Melvin Lerner discovered that test subjects had a curious tendency to assign blame for an unfortunate event to the victims — even when said event couldn’t logically have been their fault — and to assign positive attributes to people who received good fortune — even if their fortune was due solely to random chance. Lerner theorized that people have an unconscious need to organize their perceptions under the fallacious premise that the world is basically just, where good things tend to happen to good people and bad things tend to happen to bad people. Nothing in a rational analysis of our world tells us that this assumption is in any way true, but tests by Lerner and subsequent social psychologists have backed up his theory that most of us tend to interpret events through the lens of this irrational assumption anyway.

People are more comfortable believing they live in a controllable and just world, so when a cop brutalizes someone they need to start blaming the victim to maintain that psychologically comfortable perspective. Acknowledging reality is less comfortable. This is also why people often start babbling about how a rape victim shouldn’t have been wearing that or should have known better than to get so drunk, should have used self-defense techniques X, Y and Z. It’s why people justify the brutalization of Julian Assange, it’s why people excuse the abusive things the US government does to nations which dare to disobey its dictates, and it’s why any time video footage of a controversial police killing goes viral the comments are always flooded with people saying the victim should have known better than to get down on the ground so slowly or reach for his wallet so quickly.

The alternative is being real with yourself and accepting the uncomfortable reality that we live in an unpredictable and out-of-control world where bad things can happen to good people. Many people don’t know how to live life that courageously.

Because journalists often rely on statements by police departments in order to report on news events, there’s a much closer relationship between the news media and the police than there is between the news media and activists or the rank-and-file civilian population. This puts the police responsible for public relations in a prime position to advance narratives that put a much friendlier face on the cops than they have earned. This, combined with the dynamic of access journalism and fact that the news media are owned by billionaires with a vested interest in keeping their fortunes and assets protected by a militarized police force, enables police to control the dominant narrative about them.

Most westerners have also been indoctrinated throughout their entire lives by movies and TV shows about heroic cops saving the day from villainous bad guys. The wealthy class which makes these movies and shows have built their kingdoms upon the status quo whose existence depends upon a violent force controlling the world internationally and a violent force controlling the nation domestically, so mainstream consciousness is constantly saturated in stories about the military and police being awesome and virtuous.

So it’s no wonder we constantly see this same mainstream consciousness scrambling to defend depraved acts by people they’ve been trained by copaganda to regard as beneficent heroes.

We’d be lying to ourselves if we pretended there isn’t also a major racial component to a lot of this. I recently shared my husband Tim’s account of witnessing the police shooting of a black man named Oscar Grant in 2009, and watching white people rush to excuse something he knew for a fact to be completely inexcusable while black people (who are statistically much more likely to be victimized by police violence) were unable to maintain any illusions about what happened.

Let’s not kid ourselves about the major reason conservatives have been frantically trying to manage the narrative about Martin Gugino more than other victims in these protests. They understand that footage of a frail old white man being assaulted and injured by police is having a much bigger impact on a large chunk of the population than seeing people of color assaulted. For many Americans, black people being brutalized by police is seen — consciously or unconsciously — as normal. Consciously or unconsciously, it’s seen by many as just the thing that you do with black people. Bootlickers with any awareness of perception management would understand that their cop-defending agenda is jeopardized far more by the footage of Gugino than the countless other police brutality victims at these protests.

People of color are trying to change this underlying inequality of perception, and a lot of the pushback they’re receiving is due to a reflexive defensiveness around maintaining that inequality.

If you’d been parking your car on your neighbor’s front lawn for a very long time — so long you forget that it wasn’t your parking space to begin with — it would feel like a major imposition for the neighbor to tell you it’s time to find somewhere else to park. You’d feel like you were the victim. That’s how attempts to address racial inequality are experienced by many white people. People of color haven’t been permitted to occupy a human-sized amount of space in our society, so when they start moving in to their whole property it feels to many white people like a cruel eviction.

Many people are just generally terrified of other people, and find authoritarianism a soothing protection from the scary hordes of humans their ideology has had them othering. We have respect for authority drilled into us from early childhood, and if we don’t really grow up we’ll perceive a disrespect of authority figures as existentially threatening.

Lastly, people are just afraid of change. The police play a crucial role in gluing this oppressive status quo together, and radically changing their role in society will necessarily mean an end to the status quo. Add in the fact that we are obviously plunging into a time of great change for better or for worse, and people will instinctively scramble to hold the old order together out of fear.

Change is always stressful, whether it’s good or bad. People experience stress when they lose a job or a loved one, but they also experience it when getting married or starting their dream job. Yes, things are changing, and yes, we have a cognitive bias which favors stability over change. But we can’t keep doing things the way we’ve been doing them; our species is behaving too insanely and if we don’t change very soon we’re going to destroy our ecosystem if we don’t nuke ourselves first.

I don’t know what’s going to happen, and that’s okay. There’s no sense stressing ourselves out trying to paste a doomed status quo back together. Let’s plunge into the unknown with alertness and enthusiasm.