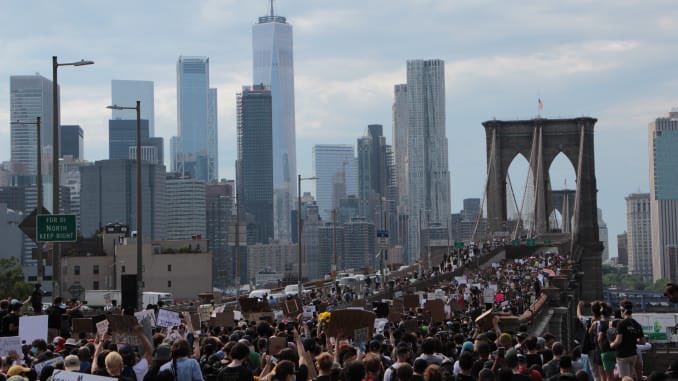 Demands to “defund the police” are rightfully chanted by protesters throughout the country, as tens of thousands of people gather in major cities across the United States following the murder of George Floyd in Minneapolis. Undoing the devastating militarization of police departments is impossible without also challenging the profit motive that drives American aggression and brutalization abroad. To fundamentally change policing in America, we also need to change U.S. foreign policy.

Paul Poast, an International Relations professor at the University of Chicago, calls it the political economy of security. For instance, military equipment tied to the Iraq and Afghanistan wars eventually made their way to local police departments through a Pentagon initiative called the 1033 program. The program facilitates the transfer of excess military weaponry and equipment to civilian law enforcement agencies. Well, at no charge to anyone other than the U.S. taxpayer who these weapons are then used against.

Defense contractors like Lockheed Martin and Raytheon have a vested interest in pushing the U.S. toward military conflict abroad. According to a 2017 report by the Stockholm International Peace Research Institute (SIPRI), around 88 percent of Lockheed Martin’s revenue comes from defense. The defense also accounts for an incredible 94 percent of Raytheon’s revenue. If it weren’t for U.S. military intervention, there would be little need to produce more weapons of war, which means significantly less revenue for these defense contractors.

The SIPRI report noted that the world’s 100 largest arms-producing and military service companies sold $398.2 billion worth of arms in 2017 alone. Since there is a financial incentive to produce bigger and badder weapons each year, the Pentagon inevitably ends with an ever-growing surplus of military equipment, which again, U.S. taxpayers foot the bill for.

This is why the current protests end up looking like literal war scenes, with civilian police using armored vehicles, bayonets, grenade launchers and night-vision goggles. As the Los Angeles Times reported, over $5 billion in surplus military equipment has been distributed to law enforcement agencies nationwide between 1997 and 2014.

These weapons of war not only find their way to police departments across the country but also make their way into our nation’s schools. For instance, in 2014, the Los Angeles Unified School district agreed to relinquish three grenade launchers it received from the Defense Department. But the district refused to let go of 61 rifles and a Mine Resistant Ambush Protected armored vehicle it had acquired through the 1033 program.

Why would any school distinct — tasked with educating literal children — need equipment used for so-called enemy combatants? They don’t. But we do find ourselves in a pretty vicious cycle. Profit-driven gun manufacturers legally bribe politicians to avoid common-sense gun legislation, which inevitably leads to more school shootings. When tragedies like the 2012 Newtown massacre happens, district administrators argue that weapons of war are necessary to protect students. The Sandy Hook shooting was what led to increased police presence in our public schools. In other words, the U.S. continued to compound the problem that led to the school shootings in the first place.

Finally, if Americans are horrified at the brutality we’re all witnessing at the hands of militarized cops — and absolutely should be — we should also feel utter disgust toward how our military treats innocent civilians in the countless countries we’ve decided to invade or orchestrate coups in. Americans have mostly turned a blind eye to the maiming of black and brown people around the world, and it’s about time we hold our government accountable for it.

Law enforcement isn’t using drone strikes to take out its perceived threats within our borders. But the Obama administration expanded on that policy abroad — and then referred to innocent civilians who died as a result as nothing more than “collateral damage.”

If we allow our government to devalue human lives around the world, we shouldn’t be surprised when they don’t value ours.

Ana Kasparian is a host and executive producer of The Young Turks on TYT.