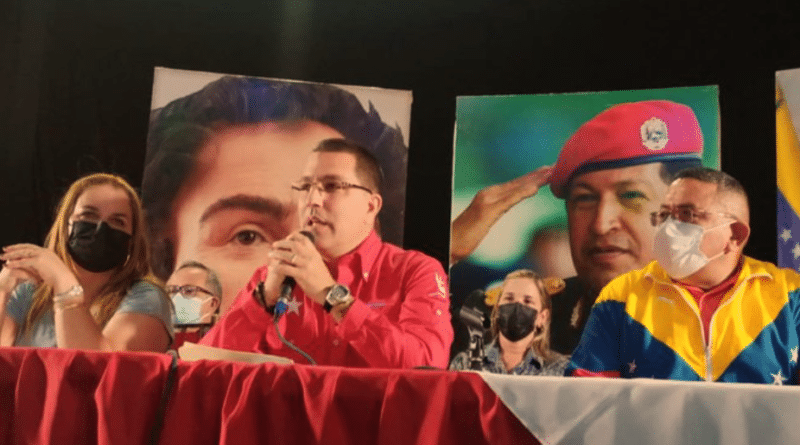 As he thanked the Chavista base and the people of Barinas for the support given to him during the elections, the Bolivarian leader Jorge Arreaza recognized the new governor of the state, Sergio Garrido, but also issued a statement to the right-wing to encourage them to act responsibly while in power.

In remembrance of the words of commander Hugo Chávez, which were spoken during moments of adversity, Arreaza Montserrat also outlined reasons why the opposition’s electoral victory does not exclude a qualitative triumph of sorts for the Bolivarian Revolution, which is strengthened by the conviction of those who remain firmly dedicated to the ongoing Chavista project.

The former candidate for the governorship of Barinas, several hours before the Electoral Power’s confirmation of the results, made the following remarks:

“Manage your victory well, don’t mess up, because there is a people here, a government, a constitution, and we aren’t going to let you go after the people of Barinas.”

Similarly, Arreaza highlighted that on January 9, a coalition was made public in which opposition groups made an agreement with the most violent factions of the Venezuelan far right. He also reminded the public that Hugo Chavéz, after suffering a defeat, “called upon our revolutionary conviction.”

With the defeat of the PSUV candidate in Barinas, the Chavista government led by President Nicolás Maduro nevertheless emerged victorious in 19 of Venezuela’s 23 governorships.

Revision, rectification, and revitalization
After describing the electoral outcome as a limited quantitative victory for the opposition, without further implications, Jorge Arreaza ratified the promise of the Bolivarian Government, made by President Nicolás Maduro, to serve the Venezuelan people:

“Our party must reflect in Barinas, using ‘the 3 Rs’ (revision, rectification, and revitalization). With humility, we must make an effort to refresh the structure of our party… We have to be flexible.”

RELATED CONTENT: Are the Candidacies of Jorge Arreaza and Claudio Fermín Legal?

Arreaza also recalled that the Socialist Part of Venezuela (PSUV) remains the most powerful political group in Latin America, and he praised the role of the “beautiful alliance” formed by the Simón Bolívar Great Patriotic Pole. He also recognized the supporters of the party for the energy, emotion, and hope which they show every day.

“The right has made an agreement with the most violent sectors of the opposition,” Arreaza said. “Garrido has been chosen as governor and as such we recognize him.” On the other hand, Arreaza urged the Chavista base to reflect on and learn from the results of these elections. Additionally, he affirmed that President Maduro will not abandon Barinas, and that he will still do everything he can to serve the region.

“With Chávez, I say that we haven’t achieved our goal, for now, but we are sure that Barinas is on the path to a better future,” Arreaza said to the press.