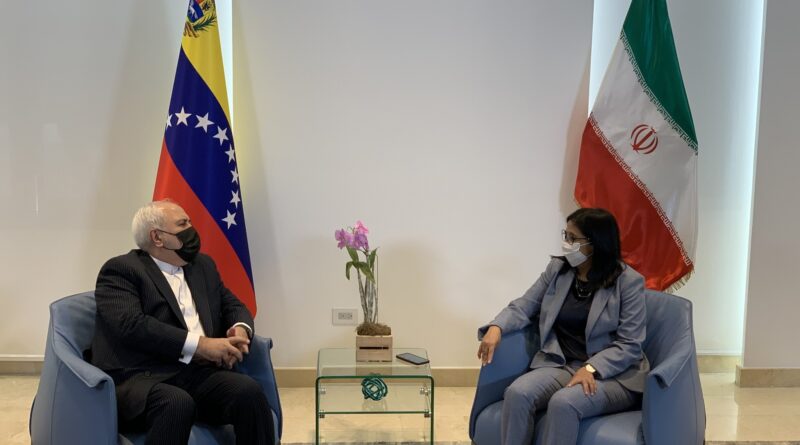 The Foreign Affairs Minister of the Bolivarian Republic of Venezuela, Jorge Arreaza, ratified that Venezuela and Iran will effectively continue to deepen strategic cooperation based on a relationship of respect for the sovereignty of both peoples. “At this time we continue to deepen this historical relationship for the right of our peoples to be free, independent, to be diverse, to build original models based on relationship of respect,” Arreaza remarked this Thursday, in statements from the Yellow House, headquarters of the Foreign Affairs Ministry in Caracas, after having completed a work schedule with his counterpart from Iran, Yavad Zarif, on official visit to Venezuela.

As part of his agenda, Yavad Zarif, at the Foreign Affairs Ministry, participated together with his Venezuelan counterpart in the conference “Venezuela and Iran for the Defense of the World to be Built,” organized by the Samuel Robinson Institute. He also met in the afternoon with President Nicolas Maduro, Vice President, Delcy Rodríguez, and Sector Vice President of Planning and President of the Mixed Commission between the two nations from the Venezuelan side, Ricardo Menéndez.

Arreaza stressed that they carried out a series of geopolitical analyzes and reviewed the bilateral agenda for political, multilateral, economic, commercial, energy, and military coordination,” and we continue to deepen this historic moment,” he said. Later Minister Zarif posted on his twitter account some photos of his activities during the day and used the expression: “expansion of bilateral ties” as a clear statement of the strong level of commitment between both countries that have decided not to be US or European colonies or quasi-colonies anymore.

In #Venezuela meeting with President @NicolasMaduro, VP Rodriguez, FM Arreaza and other ministers on expansion of bilateral ties.

Lectured today at the Samuel Robinson Institute on US/ Western terror tactics in attempts to halt the course of history toward a post-Western world. pic.twitter.com/OhNim8HR83

Arreaza recalled how the leader of the Bolivarian Revolution, Hugo Chávez, promoted these bilateral relation that have been strengthen in recent years.

“The people of Venezuela today feel more than gratitude, love for the people and Government of Iran, for the solidarity and courage of Iran in supporting Venezuela in times of serious difficulties, as Commander Chávez also did in his time. For this reason, we are very proud of this relationship,” Arreaza told his Iranian counterpart.

He also stressed that this is an example of alliances from the brotherhood, especially when anti-imperialist values, independence, sovereignty are shared” and the right of our peoples to be free and happy,” he stressed.