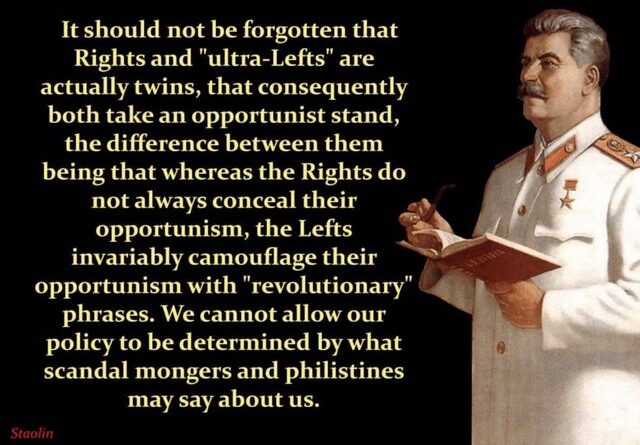 Michael Parenti warned about the leftists who decry “Stalinism.” He wrote that “What they all have in common is an obsessional anti-communism, a dedication to fighting imaginary hordes of ‘Stalinists’ whom they see everywhere, and with denouncing existing communist nations and parties. In this they resemble many centrists, social democrats, and liberals.” The impact that these “anti-Stalinist” ideological factions have is to keep the masses demobilized in the face of ever-worsening inequality, repression, environmental destruction, and imperialist military buildup.

As the imperialists have intensified their cold war against China, this contingency of anti-communist “socialists” has increasingly expanded into anti-“Dengism,” which specifically targets modern China’s embrace of global markets to reduce poverty. What these “anti-Dengists” have in common with the “anti-Castroists” and the detractors of Korea’s Juche is the notion that all the world’s existing socialist projects — i.e. the Marxist-Leninist states — are masquerading as socialist. Despite Juche indeed being based around Marxism-Leninism, “Castroism” simply being workers democracy as applied to Latin America, and Deng’s economic theory actually representing a more practical improvement upon Mao’s dogmatic approach, these projects are dismissed as a “revisionist” affront to Marxism.

The basis for this ideological impulse that Parenti described, where every socialist revolution that succeeds inevitably gets derided as “authoritarian” or “social imperialist” or “state capitalist,” stems from the alliance that “anti-Stalinist” sectarian leftists have had with reactionaries since the first workers state was created in 1917. As Marxist Jay Tharappel has written, anti-communists established a dichotomy where Euro-American colonialism was portrayed as representing “freedom” while socialism was “totalitarian,” allowing for opportunists like Leon Trotsky to use a new rhetorical weapon:

This contrived dichotomy driven by Anglo — American interests during the Cold War has strong roots in Left Anti-Stalinism. The word ‘totalitarian’ was originally used by Mussolini favourably in 1925 to describe the fascist order he wanted to build in Italy, so how did it end up becoming an Anti-Stalinist curse word to attack the USSR and Stalin? In 1936 Leon Trotsky used the word three times in his book ‘The Revolution Betrayed’ to attack the Soviet Union which made it a household invective in the Anti-Stalinist ideological arsenal from then on. Two years later in 1938 Winston Churchill used the term “totalitarian state” in referring to “a Communist or a Nazi tyranny.”

By posing as the champions of “liberty” as opposed to the “totalitarian” Marxist-Leninist villains, these anti-communist leftists spun literal mythologies designed to make themselves look like heroic truth-tellers. George Orwell, who can be considered a literary Trotskyist in that his writings consistently portrayed the Soviet Union as an undemocratic perversion of socialism, effectively wrote a volume of theory for the “anti-Stalinist” view of socialism. Within the text of 1984, he included a fictional book titled The Theory and Practice of Oligarchical Collectivism, which explained the historical developments that had led to 1984’s dystopian tyranny.

It stated that this totally unfree fictional future had come about because “by the fourth decade of the twentieth century all the main currents of political thought were authoritarian. The earthly paradise had been discredited at exactly the moment when it became realizable. Every new political theory, by whatever name it called itself, led back to hierarchy and regimentation.” The implication being that the USSR wasn’t the first workers state at all, but merely another manifestation of this “authoritarian” trend. This was pseudo-theory, based in perceptions of Stalin’s supposedly dictatorial policies that came from Nazi propagandists, imperialist Hitler-aligned newspapers, and opportunistic saboteurs like Trotsky who were known to promote lies to advance their interests.

This was the framework with which Orwell told us to understand political theory: that the logical conclusion of the “Stalinist” approach to socialism is a world completely (and according to 1984 perhaps permanently) lacking in liberty. This nightmarish warning, along with the more explicitly anti-“Stalinist” message from Orwell’s Animal Farm, has been drilled into the head of every student in the Western world who’s been mandated to read these two novels.

And Orwell’s ideological descendants have been eager not to just keep repeating these Trotskyist notions of the Russian revolution being corrupted by “Stalinism,” but to expand upon them. Foremost among these newer ultra-lefts has been Noam Chomsky, whose portrayals of the Soviet Union and the modern socialist countries have all come from the twisted perspective on Leninism that’s been described by Dash the Internet Marxist (see their article “the anti-Chomskÿng”):

Somehow, Noam Chomsky’s takes on Lenin and the Soviet Union are exponentially worse than his takes on Marx. Whereas Marx, to Chomsky, is a kind and confused unremarkable old man who may had inadvertently stumbled across a clever notion or two about history, Lenin (despite spending his entire life’s work devoted to further developing Marxism and socialism) was actually a big mean sinister trickster, actually right wing, who then saw the opportunity and seized all the power for himself to become the evil self-serving dictator of Russia (I’m embellishing, but not by a noticeable amount). [Chomsky’s speech on Leninism] is widely circulated among the libertarian left — often as their primary source when rejecting Lenin (or even offered as excuse for refusing to read Lenin!) — and it is both ill-informed and damaging.

In the video, Chomsky distorts the history of the Bolsheviks by claiming that Lenin represented a right-wing deviation, by making up an idea about vanguardism being a ploy for radical intelligentsia to “exploit” popular movements, and by claiming Lenin autocratically manipulated the fate of the Soviet Union when in actuality the democratic Soviets were the ones with the power. This aspect of the anti-communist mythology, where Lenin is absurdly charged with committing some kind of original sin where he selfishly corrupted the class struggle, creates the rationale for all the other lies that the ultra-lefts promote about socialist revolutions.

If Lenin and Stalin, the formulators of the theory which pertained to Marxism’s first practical application, were power-hungry liars, the countries following their theory must be evil as well and their words must not even be worth reading.

Such is the perverse view of history and theory that’s gone behind Chomsky’s statement that “The North Korean dictatorship may well win the prize for brutality and repression.” The complete absence of video or photographic evidence for the DPRK’s alleged human rights abuses, and the regime change think tank money that’s behind the story of every DPRK defector who’s put forth atrocity charges, aren’t worth considering under this worldview. Nor is the fact that Kim Jong Un isn’t a dictator at all, but a recallable official with one vote in his party who was elected by a transparent and non-coercive voting process.

Such is the bias which has also driven Chomsky’s claim that China “views its indigenous populations as an obstacle to developing its vision for this future critical center of international commercial networks.” He bases this accusation off of the narrative that China is committing a genocide against Xinjiang’s Uyghurs, which comes from the deeply skewed “research” of far-right Christian propagandist Adrian Zenz. As well as from Uyghurs who’ve been paid to promote fabricated atrocity stories in the same vein as the north Korean defectors who’ve told similar lies. These legitimations of imperialist anti-Chinese propaganda from ultra-left intellectuals like Chomsky has justified further demagoguery from “socialist” commentators like Nick Pemberton of Counterpunch, who’s proclaimed that “Chomsky is one to know that denying concentration camps is embracing simplistic prescriptions.”

All of this — the distortions of historical facts, the self-righteous stance against “authoritarianism” that ignores dialects, the embrace of CIA disinformation for the sake of scoring ideological points, the fork-tongued claims about how vilifying socialist countries is somehow beneficial for socialism — have produced the recent instance of ultra-left demagoguery from the “leftist” commentator Contrapoints. In a long-winded video titled “Envy,” Contrapoints gave a rant that might as well have come from someone like Ben Shapiro:

Utopian ideology instead promises relief from some general malaise, “alienation.” And so ironically it can have the same opiate effect that Marx ascribed to religion. But relief from the general anguish of human existence is not a political goal. There’s been so many revolutions in the last few centuries, but so far zero utopias. Resentment, envy, and hunger for that matter are not satiated by the downfall of the old regime. When the people have no bread they eat the rich. And when the rich are gone they eat each other. And because of the proximity effect, envy may actually increase after the revolution. You may be more envious of a favored comrade…a kulak…than you ever were of the aristocrats. So envy gets paranoid and imaginative…and the accusations start flying. That citizen is conspiring against the revolution! That peasant is hoarding grain! So the guillotine starts slicing thousands of heads off, the gulags fill up. Or an authoritarian strongman takes over, only to announce another revolution two decades later…and for what?…Socialism with Chinese Characteristics?

This rant has the same ring to it as Orwell’s claims about the Soviet Union representing some cruelly ironic new innovation in tyranny, or Chomsky’s implication that China is committing the same types of profit-motivated crimes as Euro-American colonialism. They come from the perspective that to tear down history’s socialist experiments, and to call China just another capitalist empire, is to articulate some essential truth which the “Stalinists” and “Dengists” lack the honesty to admit to. As a consequence of this smug mindset, Contrapoints has felt comfortable with totally ignoring an essential aspect of Marxism — its rejection of utopianism — to spin an additional narrative about how Marxists falsely promise a paradise. It’s pseudo-history that’s based in pseudo-dialectics, born from an evident lack of interest in studying the theory of the movement that Contrapoints so confidently talks about.

These kinds of statements help ultra-lefts feel morally superior, but they do nothing except kill genuine class consciousness by obfuscating the Marxist-Leninist route the masses must take to achieve liberation.