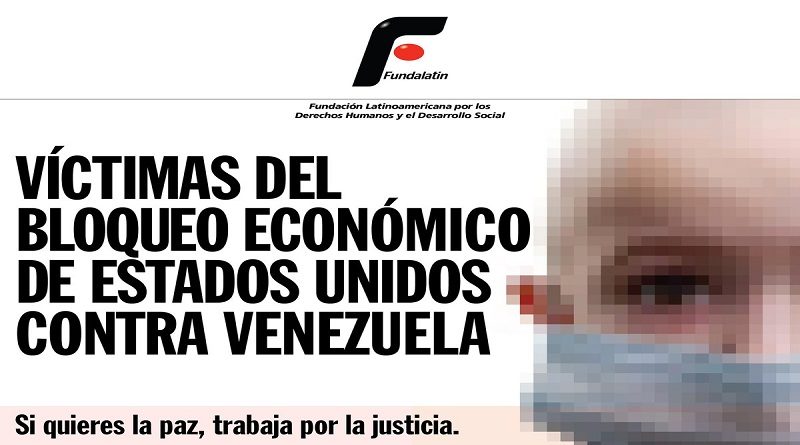 On Tuesday the Latin American Foundation for Human Rights and Social Development (Fundalatin), denounced the suspension of treatment for children with transplanted organs, which will cease on July 30, due to the financial blockade imposed by the United States government against Venezuela and the looting of Citgo.

Through a message published on Twitter, Fundalatin explained that until July the affected children who are in Italy and Argentina will be given the specialized medical treatments that were paid by the Venezuelan government through the Simón Foundation Bolívar, attached to Petróleos de Venezuela (PDVSA) subsidiary, Citgo, confiscated by the US government last year.

“Simón Bolívar Foundation – attached to PDVSA’s subsidiary, Citgo, appropriated by the US last year – notified mothers of transplanted children that their treatment will cease on July 30 of this year and it is prohibited from paying medical services for patients”, the message indicates.

The announcement is accompanied by a communication where it is suggested that parents of minors seek other support alternatives, coordinated with the foundation and the Italian hospital to find alternative resources.

Citgo is currently “managed” by a board appointed by deputy Juan Guaido who is complicit with the US government in the looting of this valuable Venezuelan asset in the US. Additionally last year alone the US Department of States reported the handing of almost US$ 500 million directly to Juan Guaido and those resources have been watched due to accusations of embezzlement/corruption.

“We again sent a complaint to the UN High Commissioner for Human Rights Michelle Bachelet, urging her to take action and defend the right to life of Venezuelan children who are being affected by the financial blockade imposed by the United States on Venezuela”, indicates another message posted on twitter.

Earlier, the president of Fundalatin, María Eugenía Russián, recalled in a letter that in May 2019, Bachelet was warned, that this unfortunate decision was due to the fact that “the banks refuse to make the necessary transfers to pay for these treatments for fear of being sanctioned by the United States Department of the Treasury.”

In the document sent to the High Commissioner, a communique from the Simón Bolívar Foundation addressed Mrs. Albornoz Hernández, mother of the Isabella girl, barely 2 years of age with a liver transplant and requiring a new operation, was attached which indicates that “in compliance with US law, this foundation must cease attending to patients on July 30, 2020.”

In February 2019, the foundation alleged that due to “the sanctions imposed by the United States directed against Venezuela and PDVSA, the foundation is prohibited from paying for services and expenses of patient care.”

The measures taken by US President Donald Trump, through executive orders 13,808, 13,850, 13,884, among others, blocked PDVSA and banned its access to the international financial system.

In August 2019, the U.S. Government decreed the total blockade of Venezuela’s assets in that country, in addition to extraterritorial effects against foreign companies or persons that provide goods or services to Venezuela, which has affected the supply and payment of health services, food and basic supplies for the population.

“The Treasury Department said that the accounts in the United States would be blocked only for the national government. However, after these measures, the benefits of this health program were paralyzed, scheduled trips to Argentina were suspended and there are patients on the waiting list who can lose their lives,” according to Fundalatin.