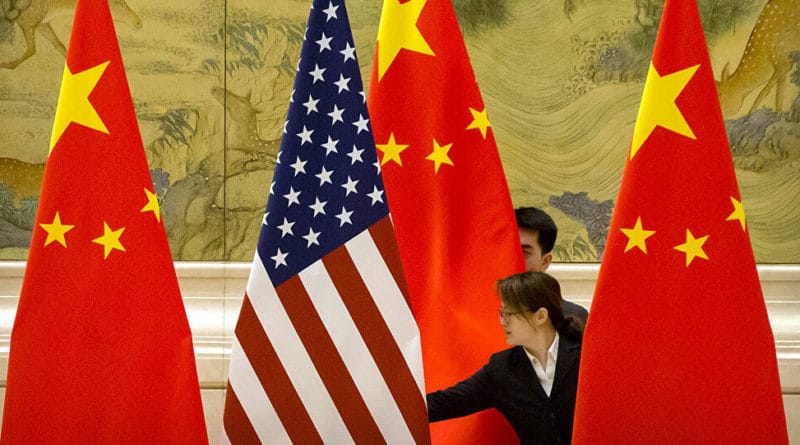 The Grayzone, a US-based independent news outlet, recently published a story busting the conspiracy theory of COVID-19 escaping from China’s Wuhan Institute of Virology, adding that it is “the Trump administration’s Iraqi WMD.”

Apart from digging into stories behind the conspiracy theories, the Grayzone also released many reports related to Northwest China’s Xinjiang Uygur Autonomous Region in recent months. For example, it released a report in March that stated “forced labour” stories hyped by some Western and US media and US-based nongovernmental organisations are orchestrated by the “US government, NATO, arms industry to drive Cold War PR blitz”.

To learn more about The Grayzone and its work, the Global Times reporter Liu Xin(GT) spoke to Max Blumenthal(B), an award-winning journalist and founder of the Grayzone.

GT: Do you think The Grayzone is anti-US, as some people criticized?

B: I’m an American. I live here in Washington, DC. Many of my neighbours, where I live in southeast Washington, DC, agree with my opinions. My neighbours are African-American and have been mostly left out by society. They understand that a country that is spending billions and trillions of dollars on an empire abroad is unable to bring them anything at home. And our readers are mostly American.

We can see it so clearly in the time of coronavirus when so many people are being betrayed by this government, including American military personnel, like these sailors on Theodore Roosevelt, who have been simply betrayed. We care about them as well. That’s really what our interest is in.

The only way they can hurt us is if they prove that we are printing lies, or if they’re willing to debate us and show that our arguments are false. But, they’re not able to do that.

GT: Some people claimed The Grayzone has a pro-China attitude, especially on the issues of coronavirus and Xinjiang. Do you agree?

B: The Grayzone does not speak for China any more than we speak for the United States. But we speak for people in the West who are opposed to war, and who are skeptical of the narratives that were being fed.

We’re an independent website. We put a lot of effort into understanding the propaganda and stories that we hear. And, when we hear a story again and again and again, that is leading us to become more hostile towards another country, that’s when our alarm bells go off, and we start to investigate.

One of our contributors, Ajit Singh, is a specialist in anti-China propaganda. He is also studying Chinese society and Chinese politics. He is in school to become an actual China expert. He helped expose stories behind reports on “millions of Uygurs in concentration camps in Xinjiang” by just simply looking at the sources and going deeper and deeper into the story until he found the original source. One of the sources about [the claim] was a Chinese dissident organisation and a group of Chinese activists who are opposed to the Chinese Communist Party and who are based here in Washington. They’re called Chinese human rights defenders, and they are funded by the NED, the US government’s regime change arm. They produced a study that claimed that there were 600,000 and a million Uygurs in “concentration camps”.

But the study only interviewed a few Uygurs, and then from those interviews, they calculated the population of the villages from where those Uygurs came from and then extrapolated from the population, the total number. It’s a completely phony methodology from a partisan US-backed group.

The other source was Adrian Zenz, who is also part of a right-wing, US government-backed group called Victims of Communism Memorial Foundation.

This group, as an extremist group, exists to erase socialism from the earth, and they are funded by the US government. They have meetings in the US capitol. They have a memorial here in Washington. Zenz himself is a Christian extremist, and he has said that he is on a mission from God against China. But this is the person who is considered the leading expert on Xinjiang in Washington, and who has been quoted in many respected journals on this story.

RELATED CONTENT: China Demands an Explanation From the US About its 3rd Country Bio Labs

Ajit Singh, our contributor, looked into Zenz’s source and found that his source was a Uygur separatist publication called Istiqlal TV, which is broadcast out of Turkey and has given voice to many extremists. Basically, they appear to have invented it out of whole cloth.

I want to emphasize; I have not been to Xinjiang. I can’t claim for certain what’s happening there. I’ve read many reliable reports that there is an enormous amount of surveillance there. But the point is that we are being fed a story, which is aiming to make the American public believe, China is Nazi Germany, and that will only lead us to war. And, this story appears to be a massive exaggeration. I would like to talk about it to the American public. It’s unfortunate that only a Chinese network wants to interview me about it. But that’s the kind of situation we’re in.

I would definitely like to come as a tourist and be able to see for myself. I would like to visit Wuhan and see everything with an open mind.

But now I’m stuck at home. I have not had a haircut in a month. Everything is closed, and it’s very frightening to me that my government is using this situation to try to push us closer to war with a country that very few Americans understand, and very few Americans have visited.

All I can do from where I am right now is to expose the American institutions and figures that are deceiving the American public into war with, whether it’s China, Venezuela, or Iran.

GT: As criticizing China has become politically correct in the US, have you come under some pressure for releasing stories on China?

B: Yes, we face heavy criticism, and we face many insults. People say, “you are genocide denier” or “you support other fascist country of China”. People say we support Russia and were paid by Venezuela and Cuba.

We face a lot of pressure for it. We faced fake lawsuits. I’ve been arrested and jailed because of the fake allegation made against me by the Venezuelan opposition here in Washington. Our writers are constantly insulted on social media. But one thing that people cannot do to us is accuse us of factual inaccuracies or debate us. We’ve extended the opportunity for some of our critics to debate us, and they usually say no.

The Grayzone was founded in 2015 to shine a light on the excesses of American foreign policy and how it was affecting us at home. Since then, we have taken on some of the hardest topics to discuss in the US, which I believe are leading the US to war.
We’re simply there to expose the lie of the day. Whenever the public is being lied to and dragged into greater hostility with other nations, they don’t understand; we’re there to help them unpack the lies. We don’t publish editorials. We publish simply reporting and analysis.

This article has been published in partnership with the Global Times.

This is one of three parts of “US using coronavirus to escalate new Cold War with China: Exclusive with founder of The Grayzone”.