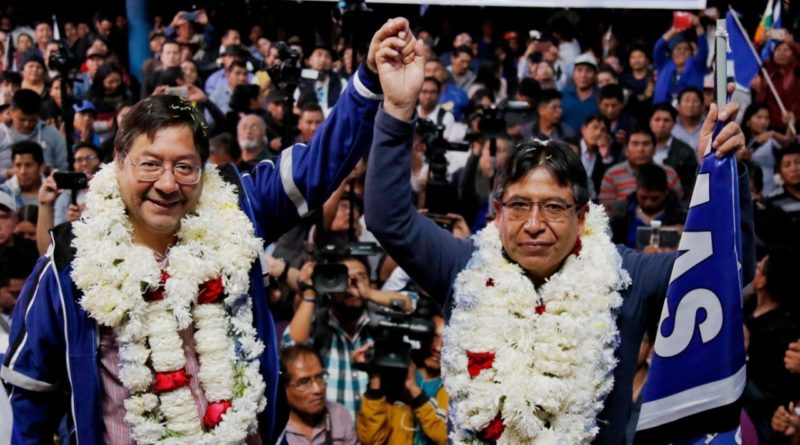 The presidential candidate of the Movement for Socialism in Bolivia, Luis Arce Catacora, talks about COVID-19 being used as a pretext to postpone elections, the economic policies of the coup government, and the approach his party plans to take

Five months after the coup in Bolivia, Luis Arce is the presidential candidate for Evo Morales’ Movement for Socialism (MAS). Journalist Oliver Vargas interviewed him about the post-coup regime, its handling of coronavirus—and what the delayed election means for the left’s chances of returning to power.

As the first wave of coronavirus infections hit Latin America, various governments across the continent begin countermeasures. Yet alongside Jair Bolsonaro’s Brazil, Bolivia distinguished itself by the incompetence of its response—a combination of inaction and repression. This is, perhaps, no surprise, given the disastrous political situation in the country since the military coup last November.

In the months following the overthrow of Evo Morales, the coup regime has expelled hundreds of Cuban doctors and medical personnel, drastically reduced the level of cooperation with Russia and China, and halted large-scale health care projects begun under Morales’ administration, such as the Unified Health System (Sistema Unico de Salud). Since the coup, a number of social programs, such as the Bono Juancito Pinto, Bono Juana Azurduy and Renta Dignidad cash transfer schemes, have been either cut drastically or effectively discontinued.

At the same time, the regime has used the crisis to mount an authoritarian crackdown. While those who breach curfew and quarantine measures risk up to 10 years’ imprisonment, the government has done nothing to guarantee financial assistance or even job security for workers. This has led to riots throughout the working class suburbs in El Alto and Oruro, and at least 1,200 arrests. This is in addition to the persecution of hundreds of social activists and militants of Morales’s Movement for Socialism (MAS) over the past few months.

This has also had an effect on the planned re-run of the presidential election. Bolivia’s Supreme Electoral Tribunal (TSE)—now headed by Salvador Romero, a well-known associate of the right-wing presidential candidate Carlos Mesa—has decided to postpone the contest to a yet-unidentified date in July or October. This further complicates Bolivia’s already fragmented electoral map, where MAS remains the leading party. In the weeks prior to the COVID-19 outbreak, most polls showed MAS candidate Luis Arce Catacora at an advanatge, capturing around 33% of the first-round vote—a lead of over 15% over both Mesa and post-coup leader Jeanine Áñez.

Luis Arce Catacora, more commonly known as “Lucho,” was finance minister in Morales’s government from 2006 until the coup in November 2019 (with a brief absence due to health reasons in 2018). In this role, he oversaw the nationalization of the hydrocarbon industry, the establishment of a number of social programs, the recognition of the “social-popular” sector of the economy and the beginning of Bolivia’s industrialization program.

He sat down together with Oliver Vargas in Cochabamba to discuss the current situation in the country.

Oliver Vargas (OV): Ahead of the presidential election, many people are predicting a victory for MAS. But will it be allowed to win—and will these elections free, fair and transparent?

Luis Arce (LA): First of all, I must say that this campaign is completely different from the previous ones. We have to deal with many factors—the de facto [i.e., post-coup] government, the media, the supreme electoral court and all its rules. So, we are facing a very difficult campaign.

In the latest poll, we are leading by more than 15%, but we believe that at the end of this battle, ours will be the sole viable candidacy. Why is that? Well, everyone is talking about it. They said MAS was dead last year and would never recover. But less than four months on, MAS is ahead in the polls and we are sure that we will win these elections.

OV: Are you able to campaign freely and openly? You have had false charges brought against you by the government. Other candidates, like Andrónico Rodríguez, also face charges.

LA: Certainly, it is more difficult for us under this government. This government is looking [to persecute] everyone, from the MAS and [members of] the former government of president Evo to the people who worked with him and members of social movements. They’re also being accused of many things, being tried, etc. So, it is very hard for us to run a free campaign. We face persecution, we face surveillance, and the people who are looking at you and what you are doing are also looking at your family. It’s a very difficult situation for us—but we’re facing it as best we can.

OV: The concern is now whether the elections will go ahead. There is a lot of talk of suspending elections, and the government may want to use the coronavirus issue to suspend or cancel the elections now that MAS is ahead.

LA: They let the virus enter the country and did nothing about it. Now that the virus is here, they are taking some steps that don’t help, and people are exposed. I don’t think they are doing the best job to avoid further contagion. …

The other thing that worries me a lot is the economy—every day, it is going downhill. There are no jobs, there is no income and there is no activity in the economy. It is not just because of the virus, but because last year, they began to replace our model with the neoliberal one. And this hasn’t been good for people.

But the government is using coronavirus as a pretext to justify all the things they have been doing badly since last year—so it is very important to separate these two things. The [impact of the] economic problems that started last year is being felt now and the virus is used as an excuse to avoid discussing them. In a way, it’s a good excuse because everyone is concerned about the problem of the virus.

OV: Indeed, turning to economic problems, current president Áñez is running alongside Samuel Doria Medina, who was a minister in previous governments. What is his economic project?

LA: He has implemented nothing but neoliberal policies and does not understand any other model, like ours [MAS’s]. If they win, there will be further free market measures—for him, that’s the only thing they can do. They will surely return to privatizations, to [a situation of] corporations earning a lot of money, and of many people facing poverty. That is what happened in the 1980s and 1990s during the neoliberal era in Bolivia. I don’t think they have changed their minds.

If they privatize things in this period, we have to re-nationalize them of course. If there is no privatization, we’ll be able to guarantee the money for our social programs because these programs are not only based on taxes, but also on the income drawn from the public companies that we have had since 2006 [when Morales’ first term began]. We need public companies and also solid tax revenues to guarantee all the social programs we have.

OV: And what about the lithium issue? Is the government in the process of privatizing Bolivia’s lithium reserves? If they are privatized, it will surely be incredibly expensive to renationalize them.

LA: Well, we don’t know what they want to do with our lithium, but it is clear that they are negotiating over it with some American companies. But regardless, we have to guarantee that lithium will be industrialized within Bolivia, with our [state] company here. That means creating jobs for people and giving us value-added income, and not just exporting lithium as a raw material. So, we will continue our policy of industrializing all the natural resources we have.

OV: Some progress has been made in the natural gas industrialization process. Bolivia used to be a net importer of refined gas, but what is the situation now?

LA: Now we have a urea and ammonia plant that we opened four years ago. We have to improve it and export more urea, which is a value-added product, and we have many projects in mind to industrialize all the natural resources we have. We will continue with the same policy we had before.

OV: Over the past 14 years, Bolivia achieved a remarkable level of economic growth, attracting attention around the world. Is the industrialization of natural resources the objective? Where was the country headed if it weren’t for the coup?

LA: The basis of the model is to nationalize natural resources, receive benefits from them and then redistribute those benefits among people. But there is also another element in addition to nationalization, which is the industrialization of natural resources. That is what allows us to obtain more income and, therefore, to continue the process of redistribution in Bolivia. The results of this model were much better [than what went before Morales’s government].

OV: When you were finance minister, you would have had to work with many different countries, drawing up many different trade agreements. What was your experience with the United States, compared to countries like Russia and China? Did they provide more equitable cooperation?

Whereas the United States wanted nothing more than free markets and free trade agreements. On the contrary, China, Russia and other countries like to make other types of agreements, in trade, investment, tourism, etc. Therefore, it is much more beneficial for the Bolivian economy to have agreements with these types of countries than the free trade agreements that the United States has with others. Yet [under the post-coup government], there is an effort to expel these kinds of Russian and Chinese investments. We have seen the nuclear plant in El Alto scrapped.

OV: One of the first steps of the new government was to change Bolivia’s foreign policy, moving away from Latin American allies like Cuba and Venezuela, and towards countries like the United States and Israel. Will that be reversed?

LA: Of course. We are going to change the whole foreign policy that exists now and return to the policy that we had before, which was very useful for Bolivia. We’re very clear about the need to change the current policy and go back to the treaties and agreements that existed previously.

LA: I think it is a very complicated question—for there are many things that we would do to avoid everything that happened. For example, it is very clear that the economy alone is not enough for people. We did not do a good enough job [outside of that] so we need some political education [beyond that]. We were working on the economy alone, but it is clear that economics and political thought must go hand in hand.

Luis Arce was the Minister of the Economy (2006-2019) in the government of Evo Morales and is the presidential candidate for the Movement for Socialism (MAS) in the upcoming elections in Bolivia.

Oliver Vargas is a contributor at Bolivia’s Radio Kawsachun Coca and a journalist.

This interview was edited by Denis Rogatyuk.