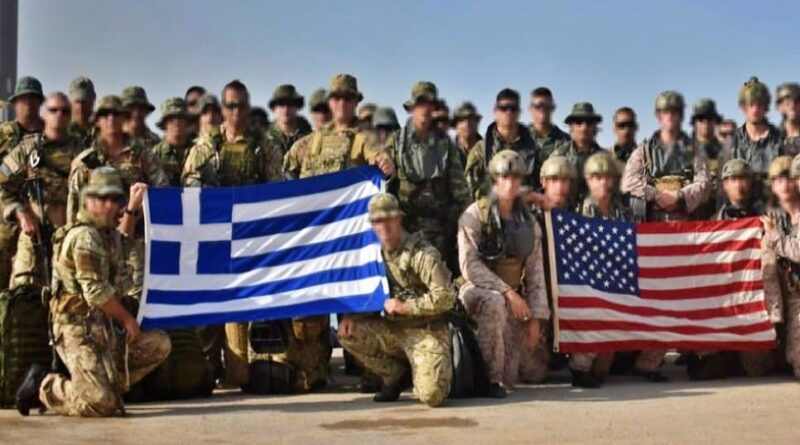 On Thursday, October 14, Greece’s Minister of Foreign Affairs visited Washington DC in order to sign the the second Protocol of Amendment of the Greek-US Mutual Defense Cooperation Agreement (MDCA) with his US counterpart, Secretary of State Antony Blinken.

The right-wing New Democracy government, continuing the “Strategic Dialogue” with the United States which was initiated by social democratic SYRIZA, promotes the renewal of the Greece-US Agreement on military bases for a period of 5 years and then its transformation indefinetely, as well as the installation of more military bases in many regions.

Greece gives annually €6.6 billion, or 3.82% of the country’s GDP for NATO purposes. Greece has been this year’s champion concerning the money it gives to NATO in terms of GDP, but when it comes to hospitals, schools and salaries the government responds that “there is no money.”

There are 21 military installations throughout Greece, from Crete’s Souda Naval base to Alexandroupolis’ port, that in various ways serve the US military needs, thus turning the country into a vast base for NATO and EU wars.

RELATED CONTENT: Protest Against Construction of US Base in Neuquén, Argentina

In fact, Greece becomes a possible target in case of war, due to the existence of these bases and the involvement of the country in the aggressive imperialist plans. The traditional involvement of Greek governments in imperialist alliances and plans and the existence of foreign military bases, not only do not protect the country, as government officials claim, but create new grave dangers for the Greek people and the people of the region.

The Greek Army participates actively in the US-NATO-EU plans in the region. Greek warships patrol to the Straits of Hormuz in the Persian Gulf. The government has sent Patriot missile artillery in Saudi Arabia, while Greek F-16s are on NATO missions, patrolling in the airspace of Albania, North Macedonia and Montenegro. Recently, Greece’s Minister of Defense Nikos Panagiotopoulos said that the government is willing to send troops to Sahel in Africa, in order to support French military operations there.

The argument that the “military agreements” with the US and France supposedly protect Greece from Turkish aggression in completely unfounded. Greece’s participation in NATO and the EU  as well as the presence of US-NATO bases in the country did not prevent Turkey’s aggression over the years. After all, NATO does not recognize any “borders” in the Aegean sea, thus playing a role of “Pontius Pilate” when it comes to Greek-Turkish disputes. Furthermore, the 1974 Turkish invasion in Cyprus which led to the partition of the island took place under the tolerance—if not encouragement—of NATO and the United States.

In a statement about the renewal of the Greece-US Agreement, on October 2019, the Political Bureau of the CC of the Communist Party of Greece (KKE) stressed:

No matter how many lies they tell about the alleged “benefits” that the Greek people will have, this is the essence and it cannot be concealed;the only “exchanges” are the ones that the bourgeoisie expects for its upgrading, while for the people the price is even greater risks due to their plans, with peoples been the victims, and that means new wars, poverty, uprooted people from their homelands. The only winners will be those parts of the capital that will benefit from energy and other business partnerships, which among others,hand the country’s public wealth to domestic and foreign business interests.

The KKE which consistently and firmly defends the people’s interests and works towards the development of the joint struggle of the region’s people demands the immediate denouncement of the “Mutual Defence Cooperation Agreement,” the closing of the Souda base in Crete and other US-NATO military installations, an end to the participation of the Greek Armed Forces in imperialist missions abroad, Greece’s disentanglement from the NATO and the EU predatory alliances, strengthening of the struggle for disentanglement from NATO and the EU, as well as strengthening of the joint struggle and solidarity of the peoples against the imperialist war and the system that bears it.

The military agreement between Greece and the US must be cancelled!