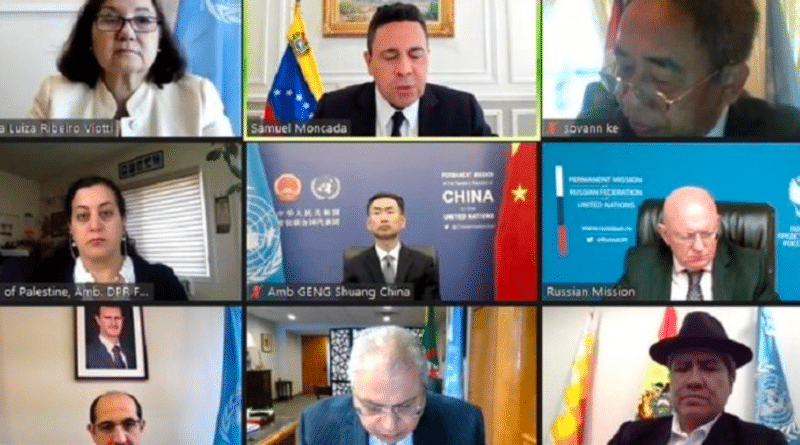 Through a joint statement read out by the Ambassador of Venezuela to the United Nations, Samuel Moncada, the Group of Friends in the Defense of the Charter of the United Nations was officially created on Tuesday, July 6. Eighteen member countries of the United Nations subscribed to the group and ratified the statement. The event took place via a teleconference conducted from New York, where the headquarters of the UN General Assembly is located.

Consequently, a proposal that was previously presented by Venezuela has been consolidated with the aim of vindicating and protecting the essence of the United Nations Charter as well as guaranteeing its purpose of defending international law and the sovereignty of the nations that comprise the UN.

As part of the joint statement, Moncada stated that the Group of Friends are committed to preserving; defending and promoting the preeminence and validity of the United Nations charter, he added that:

”We underline the need to avoid selective approaches and call for full compliance and strict adherence to the principles contained in the Charter, which constitute the core of multilateralism and serve as the basis for current international law,” read the official statement.

Ambassador Moncada also explained that the Group of Friends in the Defense of the UN Charter will focus its efforts on the protection and promotion of peaceful and friendly relations among nations as well as mutual cooperation. ”After all, it [the Charter] guarantees international peace and security,” remarked the diplomat.

Open invitation
Moncada, the Venezuelan representative to the United Nations, called on members of the international community, committed to the purposes and principles enshrined in the UN Charter, to consider joining the Group of Friends as soon as possible.

The ambassador added that the UN Charter establishes a code of conduct that has been in force for the last 75 years, and is based on principles of international law such as the sovereign equality of States as well as the right to self-determination, non-interference in the internal affairs of States, and respect for the territorial integrity and political independence of all nations.

The Group of Friends in the Defense of the Charter of the United Nations has been created officially with the participation of Algeria, Angola, Belarus, Bolivia, Cambodia, China, Cuba, Democratic People’s Republic of Korea, Equatorial Guinea, Eritrea, Iran, the Lao People’s Democratic Republic, Nicaragua, the State of Palestine, Russia, Saint Vincent and the Grenadines, Syria, and Venezuela.

For this reason, pointed out Nebenzya, the founding principles of the Charter include the non-interference of external factors in the internal affairs of countries and support for socio-economic development of all nations. He opined that the document remains extremely relevant today, especially due to the emergence of new challenges such as that of the ongoing pandemic.

”We have not learnt from the lessons of history and, after 75 years, the Charter must be defended,” stated the permanent representative of Russia to the United Nations. ”This seems ironic, but reality has shown us the need for its defense. As our institutions have been transformed by global changes, our Charter is more relevant today because many times it has been used by those who believe in their own exclusivity and have ideologies.”

Ambassador Nebenzya added that, as a member of the United Nations and the UN Security Council, the Russian Federation has joined the Group of Friends because Russia defends the principles and purposes of the Charter.

Featured image: Still from the teleconference of the member states of the Group of Friends in the Defense of the Charter of the United Nations. Photo: VTV.