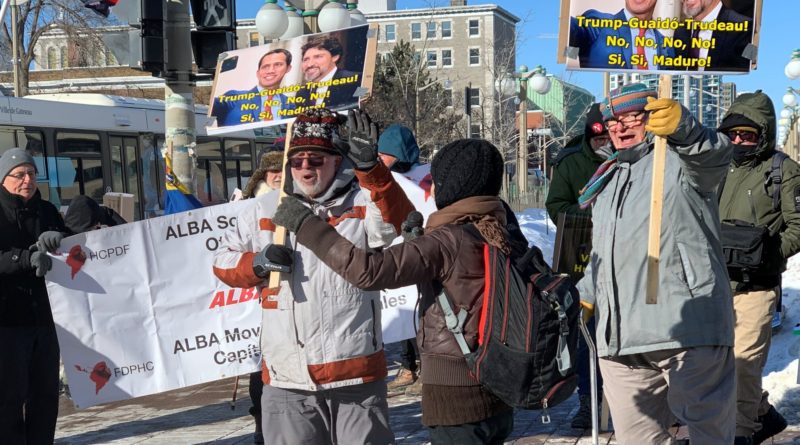 For the first time since Juan Guaidó’s auto-proclamation as so-called interim president of Venezuela in January 2019, a meeting of the Lima group (with its numerous political statements) has failed to even mention his name. All previous meetings of this spurious organization served as pledges to bring Guaidó to power and seemed to constitute virtual swearing-in ceremonies. However, he has never been sworn in, nor even come close, except by himself. On February 20, 2020, despite the extremely cold weather (even by Canadian standards), people demonstrated across Canada, including in front of the Lima group venue in Gatineau, Québec. At the same time, a statement in English, French and Spanish was widely distributed to the public and the media from coast to coast. The message and demonstration slogans focused on the Trudeau government’s role as a U.S. proxy in the Trump-led aggression against the legitimately elected president of Venezuela, Nicolás Maduro.

This constitutes an important lesson for Canadians who are increasingly saying that they must continue not to give an inch to the international or national pressure to convert the anti-imperialist sentiment of millions of Canadians into a pathetic apology for the Justin Trudeau government’s actions. On the contrary, following the relatively defensive Lima group position in Gatineau (evinced by the omission of Guaidó), Canadians who understand the situation must seize the opportunity to inform the public and demand that Canada withdraw from the Lima Group. In addition, as also highlighted in the message being sent by demonstrators, there is a desire to step up criticism of the Trudeau government for its domestic policies, such as those being implemented against First Nations peoples, which are in flagrant contradiction with the Lima group’s self-serving, distorted and highfaluting principles of “democracy,” “human rights,” etc., by which they want to judge Venezuela.

The Gatineau meeting was the first Lima group meeting since the recent four-month anniversary of the uprising in Chile, ongoing demonstrations in Haiti, massive demonstrations in Colombia, all met with thousands of arrests, with protesters wounded and murdered, and the appalling aftermath of the coup d’état against Evo Morales. Yet, the representatives of Chile, Haiti, Colombia and Bolivia, presided over by Trump’s main ally, Trudeau, were all there in Gatineau yesterday, judging Venezuela. The Lima Group meeting in Gatineau also once again insists on interfering in Venezuela and destabilizing it to provide pretexts for more sanctions from U.S. and Canada. In its declaration it says:

“While the Venezuelan Constitution calls for parliamentary elections in 2020, democracy will be fully restored in Venezuela only through free, fair and credible presidential elections. This process must include an independent National Electoral Council, an un-biased Supreme Court, international support and observation, full press freedom and political participation of all Venezuelans.” This arrogant interventionist statement amounts to preparing the conditions for calling the elections a “fraud,” as no self-respecting country in the world would allow its electoral process to be decided upon in Canada, the U.S. or any other country. To illustrate once again the self-serving nature of this statement, on the very day the declaration was issued, the U.S.-backed Bolivian government, installed by a coup d’état, ruled against Evo Morales running for the Senate in the upcoming elections!
Trudeau was rewarded by the Lima group members with a special made-to-measure clause for him to “lead” on Venezuela, as part of his global search for a seat on the UN Security Council. The clause reads as follows:
“In the coming days and weeks, representatives of the Lima Group will engage in an intensive period of outreach and consultation with all countries that have an interest in the restoration of democracy in Venezuela.”
Thus, Trudeau is being mandated once again to do Trump’s dirty work, opportunistically using his advantage over the other Lima group members thanks to his ability to speak English and French, and thus able to directly reach out to Europe, the Caribbean and elsewhere, hoping to steal the international spotlight and gain votes at the UN for the Security Council seat Canada covets.

Yet, Canada does not deserve a seat on the Security Council. No country that is a faithful ally of the U.S. on all international issues, and that has been severely criticized by UN bodies for its genocidal treatment of its First Nations peoples, should get a seat at that table. Of the countries running in competition with Canada, Norway and Ireland, either would be preferable to Canada. The peoples of the world must not forget the Trudeau government’s role in Latin America and the Caribbean, the main thrust of which lately has been the attempt to destroy the Bolivian revolution by supporting the coup d’état against Bolivia’s elected president, thus enabling that country to join the Lima group which, of course, under Evo Morales was impossible.

Arnold August is a Canadian journalist and lecturer, the author of Democracy in Cuba and the 1997–98 Elections, Cuba and Its Neighbours: Democracy in Motion and Cuba–U.S. Relations: Obama and Beyond. He collaborates with many web sites, television and radio broadcasts based in Latin America, Europe, North America and the Middle East.