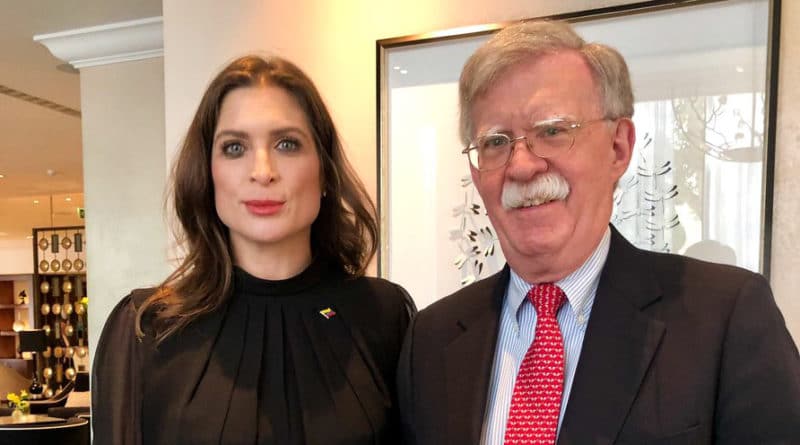 From the Twitter account of her communications firm, Asymmetrica, Vanessa Neumann accused four journalists of a “criminal conspiracy” to support Venezuelan vice-president Delcy Rodriguez. “There is a price on your head,” she threatened.

Vanessa Neumann, the U.K. ambassador of self-declared President of Venezuela, Juan Guaidó, claims that she is working closely with the FBI in an investigation exposing a “transnational criminal network” of journalists, including  John McEvoy, Pablo Navarette, independent outlet Venezuelanalysis and Camila Escalante, currently working for teleSUR English and Kawsachun News.

From the Twitter account of her communications firm, Asymmetrica, Neumann said that the four sources were involved in a “criminal conspiracy” supporting Venezuelan vice-president Delcy Rodriguez. “There is a price on your head” she informed them, “welcome to the rule of law, guys.”

Extraordinary and unacceptable threats by a woman of unknown diplomatic status against a British journalist on British soil. Juan Guaido’s overseas team very unhappy with those pursuing Freedom of Information requests – but why? ‘Democratic opposition’ meh pic.twitter.com/frIW7VqVVS

Neumann was tweeting from an organizational account because earlier she tweeted “death to Maduro!” from her personal account. After serious pushback online she claimed she had been hacked, she also claimed that “disseminating false information,” by which she appears to mean commenting on or retweeting her “death to Maduro” outburst, is a crime that the FBI is looking into.

MintPress spoke with McEvoy today, who seemed baffled by the affair, saying:

“The accusations made against myself and other journalists by Asymmetrica, owned by Juan Guaidó’s UK representative Vanessa Neumann, are at once serious and laughable. Without basis, Neumann has accused various journalists of forming part of a ‘transnational crime network’ and ‘hacking’ her Twitter account, adding that there is a ‘price on your head’. This is no way for anybody, let alone a ‘diplomat’, to behave – and the Foreign and Commonwealth Office should now seriously reconsider its recognition of her in the UK.”

Using documents obtained under the Freedom of Information Act, McEvoy, an investigative journalist, had recently revealed how Neumann was secretly meeting with the U.K. government to coordinate the overthrow of Maduro and discuss a “reconstruction” plan that promoted the interests of British corporations in a Guaidó-led Venezuela, adding fuel to speculation that this is an attempt to silence journalists.

Days after she called for the death of Venezuelan President @NicolasMaduro, Guaidó shadow puppet @vanessaneumann threatens a journalist’s life bc he exposed her plot to loot Venezuela

What is she smoking? Imperialist elitism is a helluva drug https://t.co/sR7pAloEDQ

The United Kingdom is one of the key supporters of Guaidó, who proclaimed himself president of Venezuela in January 2019, despite never standing for the position. He maintains he is the legitimate head of state despite only 3 percent of the Venezuelan population recognizing him as such. His own political party, ironically named Popular Will, expelled him in January. Last week a U.K. court rejected President Maduro’s attempts to access his country’s $1 billion gold reserves held in the Bank of England on the grounds that Guaidó was the legitimate ruler of Venezuela, a decision compared to modern piracy by many. It was also revealed that Donald Trump used at least $601 million of confiscated Venezuelan money to build his border wall with Mexico.

There is bipartisan support for Guaidó in Washington as well. On July 3, Venezuela’s Independence Day, the State Department announced that it “remains committed to supporting Venezuela’s peaceful, democratic transition and free and fair presidential and parliamentary elections.” Presumptive Democratic presidential candidate Joe Biden released an almost identical statement: “On this Venezuelan Independence Day, my thoughts are with Venezuelans who continue to work tirelessly for the cause of democracy. It’s time for free and fair elections so that the Venezuelan people can turn the page on the corrupt and repressive Maduro regime,” he wrote. Guaidó was a guest of honor at Trump’s State of the Union address in February, where he received a standing ovation from Democrats and Republicans alike. A May poll of Venezuelans found only 4.1 percent believed Guaidó was capable of governing the country.

RELATED CONTENT Venezuela Is On The Path To Make Colonialism Obsolete

The U.S. and U.K. have not managed to convince the international community to recognize Guaidó, nor to overthrow the Maduro administration, despite many attempts. The two countries have supported at least six separate coup attempts by Guaidó since January 2019, all of which have failed. In May, a group of mercenaries led by ex-Green Berets attempted an amphibious invasion of the country, intending to shoot their way to the presidential palace. However, the highly trained, well-armed fighters were immediately overpowered by a handful of disgruntled members of the House of Socialist Fishermen collective in the sleepy coastal village of Chuao, the event being christened the “Bay of Piglets” fiasco by the New Yorker. Leaked documents show that Guaidó had agreed that the mercenaries were allowed to kill anyone they pleased and that, after the coup, they were to become leaders in his private death squad, suppressing any dissent to his rule. In joining the coup, the mercenaries were attempting to collect a $15 million bounty the U.S. government had placed on Maduro’s head, the soldiers believing they had Washington’s approval to do so.

It is in this context that McEvoy found Neumann’s choice of words so distasteful. “To say that there is a ‘price on your head’ is especially sinister given the very real price that the U.S., in collaboration with the Venezuelan opposition, has put on the heads of Venezuelan officials,” he told MintPress. “It seems that no amount of scandals, crises, and violent acts can dissuade these organizations from associating with the Venezuelan opposition. The next time Neumann feels the urge to take to Twitter to attack U.K.- and Latin America-based journalists, I would advise her to refrain, and avoid embarrassing herself any further.”

Few people seem to believe Neumann. Indeed, her attacks have shocked and alienated even strong critics of the Maduro administration who applauded the U.S. sanctions. “Let me see if I understand. As part of a struggle against an undemocratic government that uses false accusations and judicial harassment against its opponents, Juan Guaidó’s ambassador to the U.K. Vanessa Neumann is not trying to weaponize the FBI to harass and intimidate her critics?” asked David Smilde of the Washington Office on Latin America. Seeing as her claims appear to be backfiring, perhaps the best course of action would be to claim her account was hacked again. It would be in keeping with the bluff-heavy Guaidó playbook.