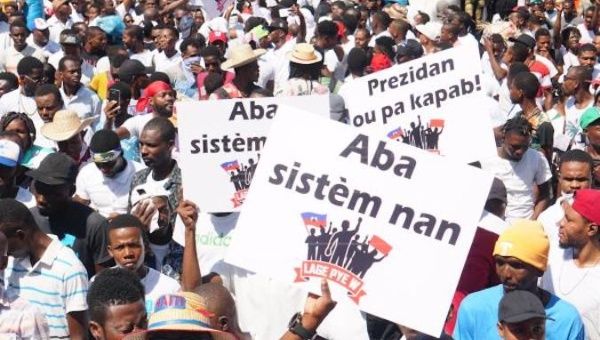 The protest was the largest one out of all the demonstrations held since the eruption of the anti-government movement on Sept. 16

Thousands of people marched peacefully on Sunday in Port-au-Prince in a protest called by Haitian singers to demand the resignation of the country’s president.

Dressed in white, protesters marched in a festive atmosphere – reminiscent of the carnival season celebrations – following the trucks with music and were joined by the famous Haitian singers including Izolan, Mathias and Ti Djo Zenny.

Under the slogan “Lage Pye’w” (“Resignation”), the march began in front of the Rex Theater in Champ de Mars, located near the National Palace, and headed over to Petion-Ville, an affluent neighborhood in the southeast of Port-au-Prince, at the foot from the hill where President Jovenel Moïse’s residence is located.

Unlike the great majority of the protests that have taken place since Sept. 16, Sunday’s march was peaceful as the police did not use tear gas to disperse the protesters.

The event that sparked the protests a month ago was a petroleum shortage that began last August, along with other factors that have fueled people’s discontent, such as unemployment, inflation and growing insecurity.

Since Sept. 16, demonstrations have taken place almost every day both in Port-au-Prince and in other inland cities.

The demonstrations and the lack of fuel have contributed to paralyzing the country’s entire economic activity, as well as classes and public transport, for almost a month.

Opposition parties announced Sunday a call for new protests set for the next five days with the goal of forcing Moïse’s resignation.

On Tuesday, a day of solidarity with the victims of “police and government repression” is scheduled, according to this new mobilization calendar published by the Democratic and Popular Sector’s spokesperson Andre Michel.

On Wednesday, a national funeral will be held for those who were killed during the weeks of mobilization.

On Thursday will be staged a “general uprising of the popular and peasant masses”, coinciding with the date of the death of the Caribbean nation’s independence hero, Jean-Jacques Dessalines.

President Moïse appointed a commission to negotiate with the opposition on Oct. 8 in order to find a way out of the political crisis.

Nevertheless, there have been increased voices in recent days calling for the resignation of the president, who has been in power since 2017.

Moïse’s image has suffered a great deal of wear and tear due to the investigation of several corruption cases, especially the Petrocaribe case, and the massacre of the La Saline neighborhood in Port-au-Prince, in which dozens of people died at the end of 2018 with the alleged participation of police officers.

On Oct. 11, a group of 107 Haitian social, political and economic organizations and institutions called for Moïse’s resignation through a document in which they proposed a “national rescue government for a successful transition.”

Featured image: Adults, young people and children participated in the march from all over the capital’s metropolitan region. | Photo: EFE