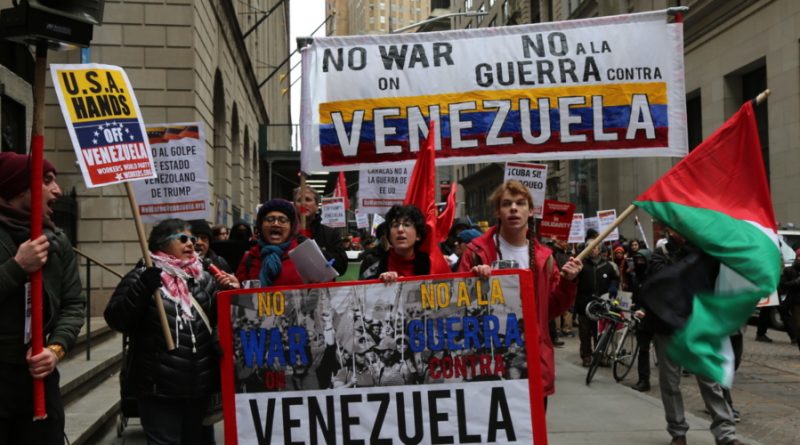 The secretary-general of the Venezuelan Communist Party (PCV), Oscar Figuera, in a recent interview stresses the need to build a broad anti-imperialist alliance of workers, campesinos, the communal movement, and all those committed to progressive social change. Venezuela is in the midst of a war for survival, making unity against counter-revolution of first importance. The PCV calls for “unity within diversity” in the Chavista movement. In doing so, Figuera may have made some overstatements which are commented upon below.

“Root of the Crisis”

“As I mentioned before, at the root of the crisis is the model of accumulation – that, combined with the imperialist aggression. But we believe that liberal [economic] policies are not going to bring us out of the crisis.”

The root of the crisis is US domination of most of the planet’s economy and banking institutions and its relentless and ever crueler regime change attacks on Venezuela. It is Venezuela’s progressive economic policies that have ameliorated the difficulties people face, and socialist measures would ameliorate them more. However, even socialist Cuba, having no internal rightwing neoliberal opposition to cope with, cannot resolve its economic difficulties. Cuba won’t be able to so long as the US blockades them. That clarifies that the root of the problem is imperialist aggression, not the defects of some of Venezuela’s economic policies.

Moreover, making a socialist revolution in Cuba was not sufficient to withstand US imperialist aggression. Cubans readily acknowledge that without the economic and military aid from the Soviet Union, socialist Cuba would have been crushed in its first few years. Venezuela’s revolution, we must recognize, has been able to survive 20 years now without the aid of a Soviet-style socialist power.

“Since early 2019, as an outcome of the PCV’s XVII Plenary, our position has been that the policies pushed forth by Maduro’s government are liberal ones, and this means that the weight of the crisis is borne by the poorest.”

Venezuela has built 2.8 million homes for working people since 2011, the vast majority under Maduro’s presidency. That would house about 10-12 million Venezuelans out of a population of 31 million. This Gran Mision Vivienda will be completed when all Venezuelans have gained decent housing. Venezuela’s CLAP program serves 6 million families, 60% of the population. The government continues to provide free education through university and free health care (now severely affected by the Western sanctions). These are not merely liberal policies. If we call them that, then to be consistent, we have to say Chavez’s policies were likewise liberal policies.

It has become commonplace to say that, under Chavez, Bolivarian Venezuela was an example of 21st century socialism but due to Maduro’s alleged incompetence and compromising, it is falling apart. In fact, Maduro continued Chavez’s economic and political orientation and policies. Blaming the Maduro government for the problems Venezuelans face excuses the role played by the collapse in the price of oil and the devastating role of the US-EU sanctions, now a de facto blockade.

“[Investment] is not going to happen for one very simple reason: foreign investment only comes to Venezuela when the price of oil is high, and it comes here with the sole objective of directly profiting from the wealth generated by oil sales.”

“After all, we are in the midst of an inter-imperialist dispute between world powers.”

US imperialism has been losing its political and economic domination over the world for some years and has been trying to reassert itself over those countries that show even some   independence against it (such as Venezuela, Bolivia. Cuba, Iran, Qaddafi’s Libya, Russia, China. North Korea, Syria). That a relatively poor country like Russia has the military power to stand up to the US does not make it imperialist. Nor can China, still retaining a predominantly socialized economic base, be called an imperial power. Because these two powerful countries that Washington considers enemies back the national sovereignty of other countries threatened by the US Empire does not turn this into an inter-imperialist rivalry. Such thinking lets the actual aggressor off the hook.

This vague formulation says next to nothing. “Moving toward” socialism means what? Public schools, public libraries, public transportation systems all were a “move” toward socialism. In Imperialism, Lenin wrote monopoly capitalism was a move toward socialism. Certainly, all the social programs Chavismo is justly famous for are moves towards socialism.

Let’s assume Oscar Figuera means by a “move toward socialism” the actual carrying out of a socialist revolution: the land is nationalized and given over to the campesinos, industry and banking nationalized and operated by workers’ representatives, and the national distribution of goods is decided by a government of workers and peasants. Venezuela has reached a higher level of economic development than North Vietnam or North Korea in 1945, China in 1949, and probably Russia in 1917, yet all those peoples carried out socialist revolutions.

The Chavista economist Pasqualina Curcio recently pointed out that in fact only 15% of Venezuela’s GDP comes from oil; 85% comes from other productive activity including food production (6.4%), manufacturing (21%), and construction (8.9%).

In agreement with Oscar Figuera, she adds:

“The key to move from the capitalist rentier model to the socialist Bolivarian model of the 21st century is the sovereign use of oil revenues. This is not an issue of ‘substituting imports’…. The problem is not the oil or the revenues it generates. The problem is the use given to such income. At least $370 billion are enriching banking accounts in tax heavens…. This is an issue of stopping the transference of public resources to a monopolized private sector that is appropriating them and taking them out of our territory.”

Defending the Sovereignty of Venezuela, which “continues to be a flagship of the anti-imperialist struggle”

While the statements by Figuera quoted above may be problematic, these are in context of his main point:

“Even though the problems we face here are huge, Venezuela continues to be a flagship in the anti-imperialist struggle. We need a Venezuela that can hold its ground, while we struggle within.”

We outside of Venezuela have the obligation to oppose our countries’ illegal sanctions/blockade on Venezuela. We can also publicize the example of the many Chavista  programs for their 99%.  Alison Bodine and Ali Yerevani explain the direction the movement in solidary with Venezuela must take:

“Many respected progressive and leftist intellectuals and analysts in North America and Europe are paying perhaps too much attention, or are carried away by, the internal dynamics of the Bolivarian revolution, without realizing that our main task is not to speculate about the revolutionary process in Venezuela. We must understand what Venezuela needs right now and consequently what our main and immediate tasks are – especially as people living in the US or Canada, in the belly of the beast. The best way to contribute to the struggle of Venezuelan people against the reactionary pro-imperialist right-wing opposition inside Venezuela and against the constant attack, sanctions, and interventions of imperialism, is to build a strong antiwar, anti-imperialist movement that also focuses on building a Venezuela solidarity movement in defense of self-determination for the Venezuelan people.”