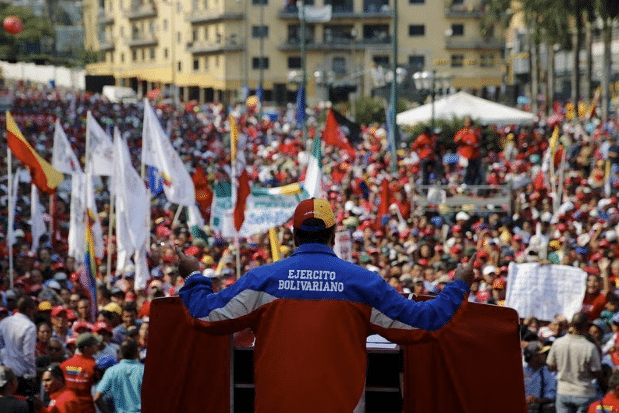 June 13 (Special for Orinoco Tribune)—On Friday, June 11, the fourth monthly US/Canada Hands Off Venezuela picket action drew together diplomats, activists and labor organizers from Canada and Venezuela for a discussion about the economic blockade of Venezuela and a protest of the criminal coercive measures imposed by the US and its ally Canada.

The virtual event featured presentations by Alison Bodine, Coordinator of the Fire This Time Venezuela Solidarity Campaign and author of Revolution and Counter-Revolution in Venezuela; Carol Delgado, Venezuela’s former ambassador to Ecuador; Dimitri Lascaris of Canada’s Green Party, Don Foreman of the Canadian Union of Postal Workers, and Radhika Desai, Professor of Political Economy with the University of Manitoba.

Canada’s role in illegal unilateral sanctions and coercive measures
Bodine provided a concise summary of Canada’s role in the economic war against Venezuela. Although the economic blockade is often referred to as an US initiative with EU backing, Canada also participates in coercive measures against Venezuela. Canada has “sanctioned” 52 government officials including President Nicolás Maduro. These measures, a violation of United Nations protocol and of international law, prohibit any person in Canada and any Canadian outside Canada from making any economic transactions with, or providing any goods or services to, any of the listed individuals or to anyone acting on their behalf.

Commenting on Canada’s role, Bodine confirmed that the Canadian coercive measures “legitimize the US sanctions and blockade, but they also are often used in a manner that it’s not about freezing the accounts of one Venezuelan official, but it’s really about demonizing anyone who is participating in the government or supporting the Bolivarian Revolution.”

In addition, Canada stripped Venezuela’s Canadian ambassador Wilmer Omar Barrientos Fernández of his diplomatic credentials on December 25, 2017—a spiteful Christmas gift—and Canada leads the Lima Group, a coalition of countries devoted to overthrowing Maduro which, as Bodine noted, has seen its international reputation continue to plummet.

“The Lima Group… has continued to crumble and lose legitimacy—if it ever had any—including losing Argentina this year,” said Bodine. “We expect that it will continue to fall apart, especially given the recent election in Perú.”

Canada’s hypocrisy: extends ‘helping hand’ to Venezuela’s emigrants while destroying its economy
This week Canada plays host to the International Donors’ Conference in Solidarity with Venezuelan Refugees and Migrants, aiming to raise $1.44 billion from countries around the world to support anyone who has left Venezuela. Bodine pointed to the hypocrisy of this campaign. A torrent of media surrounding the event draws attention to Venezuela’s economic struggles without ever mentioning the coercive measures and economic blockade that have stripped Venezuela of 99% of its foreign revenue.

“No doubt that some people have chosen to try and find prosperity in other countries around Venezuela at this difficult time created by the blockade,” commented Bodine, “but it is nowhere near the scale nor the urgency of the multiple crises of people fleeing Central America, fleeing violence, or poverty, that arrive at the US border.”

Canada’s exploitation of Venezuela’s natural resources
Venezuelan diplomat Carol Delgado drew attention to the case of Crystallex, a Canadian gold-mining company that has tried to exploit Venezuelan gold deposits in the Imataca National Forest Reserve of the Orinoco Delta region, Bolívar state. In 2008, after the Bolivarian Republic expressed concern over the impact of the mine on Indigenous Kariña communities, and to the ecological dangers of the project, Crystallex was denied a permit to exploit the gold. As a result, in August 2018 a US federal judge ordered the Venezuelan government to pay $1.2 billion to Crystallex.

“Together with the US they are trying to claim CITGO in order to compensate for the money they supposedly lost in this operation,” noted Delgado. She expressed hope that Canadian citizens would not condone these activities if they were better informed. These legal attacks that privilege the demands of foreign investors in Venezuela are “basically stealing from countries,” said Delgado, “and they can do that because the populations don’t really know what is happening.”

In January of this year, in a case that is still being deliberated, a US judge approved the sale of shares of Venezuelan-owned, US-based refiner CITGO to “reimburse” Crystallex $1.4 billion for the denial of its permit to exploit the gold reserves of the Imataca National Forest Reserve.

‘Defending Venezuela is not about defending socialism’
“From the beginning of the Bolivarian revolutionary process until today, the United States has failed to isolate Venezuela from the rest of the world, no matter how hard it tried,” Bodine concluded. “Despite terrible unilateral sanctions imposed on it, Venezuela continues to have economic and co-operative relationships with other developing countries, especially those that have also been targeted by the US government. This can demonstrate to the rest of poor, working, and oppressed people in Latin America that there is a possibility for continued development without reliance on the United States, the IMF, and the World Bank, and that is one of the many examples that Venezuela has given that are such a threat to the world system of US domination.”

Latin America and the Caribbean have been riven by demonstrations against repressive US-backed governments in Colombia, Haiti, and Brazil in 2021 alone. Following the examples of Bolivia, Venezuela, and Nicaragua, the region has recently seen great electoral support for socialist and anti-imperialist political movements in Chile, Ecuador, and Perú—where Marxist Pedro Castillo won the presidency last week.

“Throughout Latin America, the poor masses, the working classes and young people are rising in response to the deepening crisis imposed on them by US hegemony and neoliberal government,” said Bodine. “The center of anti-imperialist struggle, I would say, has become Venezuela, and therefore defending Venezuela is defending poor working and oppressed people in Canada and the United States, and is the central task for any anti-imperialist and anyone who believes that a better and just world is not only possible, but necessary.”

“Standing for Venezuela’s sovereignty and self-determination is not a question of defending the left, or socialism, or socialists,” Bodine emphasized. “The Venezuelan people deserve to live without any imperialist pressure on them, without the strangling of the economy, and without any threats against their right to determine their own destiny and to guide their own interests.”

Featured image: Venezuela’s President Nicolas Máduro speaks to supporters during a rally to celebrate May Day in Caracas, May 1, 2015. Photo: Reuters/Jorge Silva