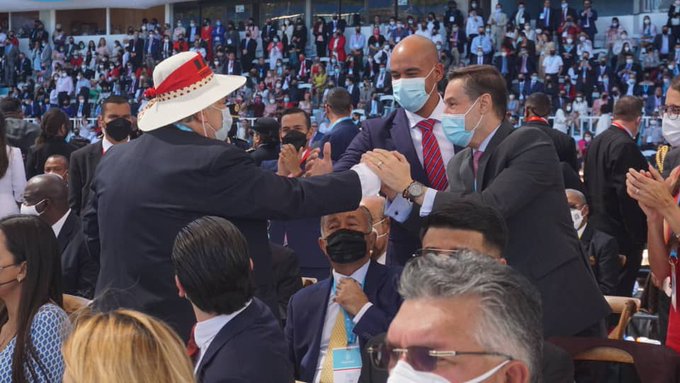 With the start of the mandate of President Xiomara Castro de Zelaya in Honduras, the Republic of Honduras normalized diplomatic relations with the Bolivarian Republic of Venezuela. The Honduran leader took office this Thursday, January 27, with the announcement of very innovative measures to address the crisis of extreme poverty in her country, as well as a number of progressive measures in domestic and foreign policy.

The political, economic and cultural exchange and cooperation between Venezuela and Honduras has been interrupted since 2019, when former President Juan Orlando Hernández terminated relations with the legitimate government of Venezuela, headed by President Nicolás Maduro, and recognized Washington-backed coup-plotter Juan Guaidó instead.

The announcement of the resumption of diplomatic relations between the two countries was made by the Venezuelan Minister of Foreign Affairs, Félix Plasencia, who led the delegation of the Bolivarian government at the inauguration ceremony of President Xiomara Castro.

In this regard, Foreign Minister Plasencia thanked the Honduran people for guaranteeing, through their exercise of the right to vote, the nation’s return to democracy with the victory of Castro.

Wave of changes
The President of Venezuela, Nicolás Maduro, congratulated the new president of Honduras and the Honduran people “with a great Bolivarian, Chavista and revolutionary greeting.”

Describing President Castro as an authentic, brave, intelligent and honest leader, Maduro commented, “A new wave of changes is sweeping through the great homeland of Latin America and the Caribbean.”

After the inauguration of President Xiomara Castro, her government returned the Venezuelan embassy to the legitimate government of Venezuela. According to AFP, the “representation” of Juan Guaidó, who was recognized as the “interim president” of Venezuela by the previous Honduran government, left the embassy headquarters days before Castro’s inauguration.

For its part, the Venezuelan delegation to Honduras proceeded to recover the diplomatic quarters. From there, the authorities designated by President Nicolás Maduro will start working again, with the resumption of bilateral relations. Xiomara Castro’s victory and the re-establishment of Venezuela-Honduras relations represent a new defeat to the almost extinct Lima Group, created by the US and Canada, with the purpose of promoting a coup d’etat and diplomatically isolating the Nicolás Maduro administration.