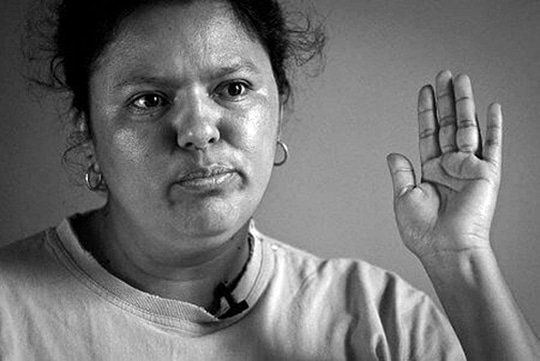 Five years without your voice but your legacy continues to spread among the women, girls, boys and men of your people. Precisely on this emblematic day, what better tribute, comrade Berta, than to promise you that all the seeds you sowed in your beloved Honduran land will continue to germinate together with your best ideas, which are already a model for the new generations of peasants to copy. They will always be in charge of rescuing your spirit as a passionate, courageous and direct woman when it comes to imagining new insurgencies.

We got to know you, several years ago, in the Bolivian land of Vallegrande, where another Latin American like you fell in combat for the same reasons to which you dedicated a large part of your life. Then, we guessed your steps together with those of so many women who, in the difficult but noisy days of the confrontation with police and military coup perpetrators, showed the world that “we are not afraid,” an epic phrase that became a battle hymn, between shouts of rage, lead bullets, the fields set ablaze, and all the courage of a people who arose once again.

We embraced you again in Venezuela, pulsating with the crowds adorned in red, and then in Argentina, in exciting meetings, where you enlightened us with your vision of the difficulties that the Honduran Resistance was going through, of which you were a fundamental point of reference together with your COPINH comrades. You knew better than anyone that the elections, as they stood, were a trap to whitewash a brutal dictatorship that has been decimating your people for all these years. “I will continue with my people, be loyal to them, because they’re not willing to have their arms twisted,” you told us, cursing the “international agreements” that allowed the dictators to regain strength after being cornered. It was precisely at that last meeting, shortly before you gave your testimony to an audience eager to listen and to learn from your example, that we said to you: “take care, sister, we need you,” discovering in your eyes that your path of leadership had already been set.

Now that we are biting our lips with impotence, still angry at those who vilely assassinated you, we want to remember you as what you always were: a generous militant for life, a lover of rivers, trees, and mother earth, a fierce enemy of those who try to stain them, contaminating your land with their imperial poisons; the earth that you so often trod, barefoot, “so that you could feel the humidity of its soil.”

A declared feminist, not from the comfort of official offices but in the streets, side by side with your younger Lenca sisters and also with the older ones, those who exuded wisdom through their pores to you and the others. You were a consistent anti-capitalist, whom the most destructive transnationals learned to fear, because you never backed down when you were convinced that your cause and that of your beloved COPINH was in danger. There weren’t enough hours in the day, when it came to mobilizing for those who were ignored, beaten and expelled. Sometimes it was with the heroic peasant women of Bajo Aguan, sometimes in front of the mansions of the powerful in the urban areas. Your demand was heard all over the continent: “stop destroying our forests, stop poisoning our water!”

This coming March 8, you will march with us all. In Tegucigalpa, Buenos Aires, Chiapas or Caracas. In the narrow streets of the West Bank and Gaza, or in the slums of Beirut, your name and your smile will be on the flags and banners we carry, your words will be evoked in the slogans and speeches of those who, like you, do not need to have their memory institutionalized to evoke, this and every day of the year, the strength of women fighters. We will not speak of death but of life with dignity and justice, as the fundamental premises that you always carried in your peasant saddlebags. This will be the best way to show the assassins who shot you on that fateful night that they have not been able to break your spirit, or leave us without your voice and legacy, comrade Berta Cáceres.