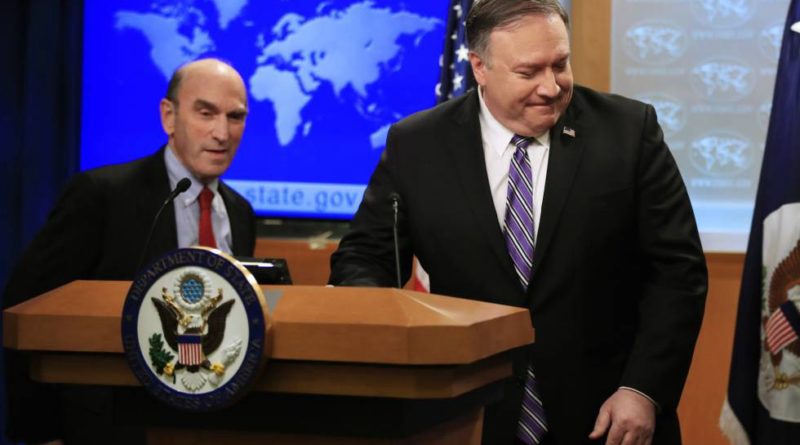 The order came to formalize a siege that the Venezuelan economy and public finances were already suffering since 2015 and 2016, when the closure of accounts of the Venezuelan state abroad began to emerge as the operational pillar of a strategy aimed at restricting imports from Venezuela and isolate the country from world trade.

On paper, this Executive Order limited itself to restricting the financial operations of the state oil company, that is, it blocked the purchase and sale of bonds and the possibilities of new indebtedness in the future. In the midst of a cycle of low oil prices, this restriction meant that PDVSA could not resort to sources of foreign capital to improve its infrastructure, including its refineries.

In January 2018, the State Department celebrated that the general financial blockade strategy, shaped from the legal framework of Executive Order 13808, was being effective.

“The pressure campaign against Venezuela is working. The financial sanctions that we have imposed (…) have forced the government to start falling into default, both in sovereign debt and in the debt of PDVSA, its oil company. And what we are seeing (…) is a total economic collapse in Venezuela. So our policy works, our strategy works and we will maintain it,” said a communication from the State Department presented on condition of anonymity. Then its post in the media was deleted.

But in reality the strategy has a shared responsibility. The coalition of anti-Chavez parties folded to the guidelines of Washington, promoted the blockade measures taking advantage of its leadership position in Parliament, highlighting the year 2017, when the then president Julio Borges, dedicated his entire agenda to instigating the imposition of increasingly iron sanctions against Venezuela.

Thus, while Washington was building the legal framework for a prolonged economic war that would escalate depending on the political situation, Julio Borges and the opposition parties, under the table, were in charge of the communicational management of the measures, including institutional support via the National Assembly.

It was about projecting that “Venezuelans in general” were asking for sanctions as a support mechanism for the “restoration of democracy”, and that the Trump Administration, being highly committed to the “noble” purpose of political change for the “society”, then took the vanguard in the adoption of measures of economic blockade.

Two years later, this narrative has lost the ability to justify the intensification of sanctions. There are no longer “noble goals.”

Throughout 2018, the route to Venezuela’s energy collapse took the form of a general strategy encompassing the import of food and medicine, the commercial and financial transactions of the Venezuelan state and the suppliers of additives and chemicals for the refining of gasoline.

The frantic deployment of sanctions against dozens of officials and the country’s main companies, banks and political institutions forced, on the one hand, the commercial and financial isolation of Venezuela, and on the other, reputational damage that drove away trade relations with companies and countries.

But Juan Guaidó’s self-proclamation as president of Venezuela, invested with authority through a tweet from Donald Trump in January 2019, involved a 180-degree turn. Days later, the state oil company was included as a company designated by the Treasury Department, through Executive Order 13850 , which de facto blocked it from the United States energy market and negatively interfered with its worldwide network of buyers and suppliers.

From that moment, in early 2019, buying gasoline or additives to produce it in Venezuelan refineries became, for the state oil company, an uphill, complicated operation, now mediated by triangulation and the creation of new trade networks to carry out imports and thus avoid the almost military surveillance system of the Treasury Department.

Washington used its geopolitical instruments of power to transform vital imports from the country (and the oil industry that supports it) into a kind of crime that would be incurred by related countries and companies. The narrative of the supposed Venezuelan “failed state” of the (armed) cycles of regime change of 2014 and 2017, shaped the weapons of destruction remotely directed in the form of sanctions that the United States would later use against the country.

The economy was turned into a central battlefield of unconventional warfare, mediated by logics of judicial and financial repression that emanated from 7 executive orders deployed throughout the strategic sectors of the country.

Between April and September 2019, and in response to the sinking of Guaidó’s image, the Treasury Department opted for an escalation and added to the OFAC list more than 30 PDVSA (owned or operated by the state-owned) vessels and tankers in charge of the transportation of oil, gasoline and derivatives for refining.

OFAC’s measures, now applied to the oil industry’s transport fleet, prohibit in principle the commercial or financial linkage of US companies and citizens. But since it is a long arm jurisdiction, the United States has exceeded the measures of its territorial scope, putting pressure on third parties, be they governments or companies, to break any relationship with Venezuela, given that they may be affected, fined or penalized by the Treasury Department.

This globalization of the blockade against Venezuela was made official on August 5 with Executive Order 13884 that seized all Venezuelan assets in the United States. The irremediable loss of Citgo, the PDVSA subsidiary in the US, with which the country was able to import gasoline, key spare parts and chemical additives for the industry in the first years of sanctions, was confirmed.

This executive order facilitated so-called “secondary sanctions” applied to companies outside the US jurisdiction and third countries. The impact would be felt quickly.

Bloomberg reported in September that “Shipowners’ Club, an insurance provider for international shipping companies, advised its members to exercise caution if they are related to Venezuela. The group says that if a member is sanctioned, their property can be blocked and the club can terminate or suspend insurance coverage.”

The impossibility of contracting shipping companies and contracting the corresponding insurance for oil exports (base of 90% of the country’s income), added the operational complexities to obtain gasoline.

Bloomberg reported late last year that “Before October, ships largely delivered European gasoline directly to Venezuela nonstop. But then several operators, including Exxon Mobil Corp SeaRiver’s shipping subsidiary and China’s Unipec, said they would not charter vessels that had been in Venezuela.”

“While the supply of gasoline is not affected by US sanctions, specifically, the North American country has hindered the sale of fuel to Venezuela,” concluded the US financial media.

The year 2020 began with the image of Guaidó diminished and a climate of political stability that was struggling to permeate the economic scenario. The difficulty in importing derivatives or gasoline directly reported by Bloomberg, forced a reorganization of the trade network in which the Russian oil company Rosneft was key.

In March, Washington responded to this new scheme by punishing Rosneft affiliates, Rosneft Trading (Switzerland) and TNK Trading International, in a planned attempt to cause a collapse of the country’s gasoline supply. The illegal measures against the Russian subsidiaries were based on the cooperation established with Venezuela to revive the sale of crude oil and the import of gasoline that had been banned by the United States since 2017.

The Russian Foreign Ministry spokesperson is correct in stating that the United States believes that Russia and Venezuela are American provinces where the White House can exercise legal dominance.

On April 8, the Reuters agency recounted the impacts that these measures were having on the availability of gasoline in Venezuela. “Since the end of 2019, US officials have asked most of Venezuela’s fuel suppliers to avoid sending gasoline to the crisis-affected nation. In the latest round of calls in early March between US officials and oil companies, they repeated the ban, despite worsening humanitarian conditions in the country, according sources,” the agency said.

Reuters reported that Italy’s Eni, Spain’s Repsol and Reliance Industries of India continue to export gasoline to Venezuela, however, the Gringo officials quoted by the agency were not very comfortable with the shipments and relations with PDVSA. “They underscored the message that there is no gasoline as part of oil exchanges,” Reuters concludes, pointing out that Washington is mobilizing to cut the country’s supply lines .

The second half of April in Venezuela has been marked by the social quarantine ordered by the Venezuelan government to flatten the contagion curve of the Covid-19 pandemic, but also by the shortage of gasoline as a result of the destructive sanctions of the United States, seeking to shore up the continued blow.

Its shock wave has hampered the mobility of the country’s food, medicine and basic goods, accelerating inflation, expectations of economic paralysis (the blood of the parallel dollar) and the chaotization of the country’s social and economic life. As the violence of the sanctions increases, so does the obvious evidence that they harm the country.

In October 2018, the former ambassador to Venezuela of the United States, William Brownfield, stated in an interview : “if we are going to sanction PDVSA, it will have an impact on the entire people, the ordinary citizen (…) at this time the the best solution would be to accelerate the collapse even if it produces a period of greater suffering for a period of months or perhaps years.”

That is all, your honor.

Featured image: The White House delegate for Venezuela, Elliott Abrams, stated in February this year: I hope that “some of Repsol’s activities will change,” referring to relations with PDVSA. Abrams directs pressure against European oil companies not to trade oil products with Venezuela. Photo: AP