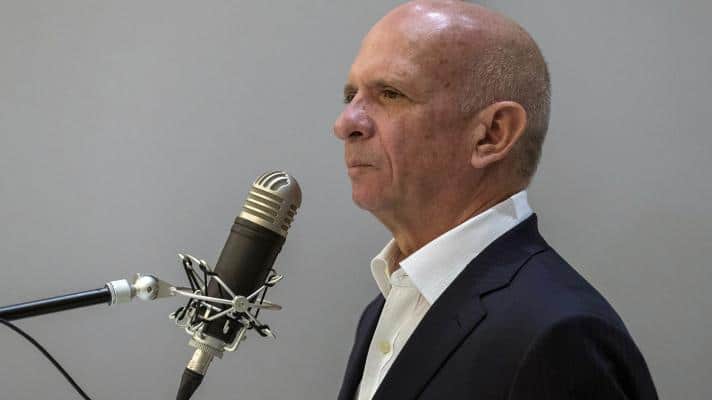 The capture of Hugo Carvajal in an apartment in Madrid, capital of Spain, on September 9, marks the end of an investigation led by the United States, and carried out by the Spanish police, to extradite Carvajal to the US in order to prosecute him for charges of drug trafficking.

In 2019 Carvajal, a.k.a El Pollo [the chicken], escaped from house arrest in Madrid after Spanish police had approved his extradition, months after Carvajal left Venezuela for Europe and after having recognized Juan Guaidó as “interim president” of Venezuela. Carvajal was also involved in the USAID-backed covert arms smuggling operation from Colombia to Venezuela that was thwarted at the Colombia-Venezuela border.

Carvajal’s political shift was apparently sudden and geared towards a US-backed “regime change” strategy, while, at the same time, being persecuted by the DEA and US justice.

An investigation by Venezuelan investigative website La Tabla, published in February 2017, revealed the ins and outs of the accusations against the former deputy and former member of the United Socialist Party of Venezuela (PSUV), that put him right at the centre of a CIA plot and its drug trafficking ratlines in the region.

An airplane and the CIA
Former US prosecutor Preet Bharara had charged Carvajal before the Southern District Court of New York for his involvement in the shipment of 5.6 tons of cocaine seized at the Ingeniero Alberto Acuña Ongay International Airport in the city of Campeche in Mexico, on April 10, 2006, “on board a DC-9 plane which had serious indications that it was owned or controlled by the CIA,” stated La Tabla in its investigation.

The Venezuelan link come from the fact that the aircraft had arrived at the Simón Bolívar International Airport in Maiquetía on April 5, 2006, “according to the testimonies of the officials of the air services company that received it, recorded in their statements made at the Third Court of Vargas state [presently La Guaira state] which was in charge of the investigation in Venezuela,” indicated La Tabla.

The plane was registered in the United States with the number N900SA, according to “data collected by journalist Daniel Hopsicker, who has dedicated himself to investigating the links between US intelligence and drug trafficking, who stated that the plane cannot but be linked to the CIA.”

After the seizure, the aircraft was renamed Cocaine One because, according to Hopsicker, “it was painted to look indistinguishable from the official US government aircraft of the Department of Homeland Security,” like the US presidential flight Air Force One.

La Tabla expanded further on the details of the origin of the aircraft:

The expenses for the flight were paid by pilot Carmelo Vásquez Guerra and the billing was made on behalf of the company Royal Sons Inc., based in Clearwater, Florida, which owned the aircraft, according to the US Federal Aviation Administration (FAA).

Royal Sons is directed by Frederic J. Geffon, who hired Venezuelan pilot Alberto Damiani to take the aircraft from St. Petersburg to Maiquetía and deliver it to Vásquez Guerra. This information comes from Geffon’s testimony before the Venezuelan Scientific, Penal and Criminalistic Research Corps (CICPC).

To determine the link between DC-9 and the CIA from the data provided in the testimonies, Hopsicker highlights Brent Kovar’s public ties to top Republican Party leaders, including Senator Tom Maley and former Florida Governor Jeb Bush.

Jeb Bush, coming from a family of presidents and Texan oil and financial executives, had a vertiginous rise to financial and political power in Florida, “accompanied by a trail of corpses and failed savings and loan banks accused of money laundering for the CIA,” according to US investigative journalist Wayne Madsen in an article published in 2015.

Madsen also stated that Jeb Bush was one of the main financial operators of the Texas Commerce Bank in Caracas in the late 1970s, when his father George H.W. Bush was the head of the CIA. Unofficially, the Texas Commerce Bank was “CIA’s main financial liaison with the Venezuelan oil industry and the Colombian drug cartels,” a scandal that transpired little at that time. The full story can be read here.

Regarding the owners of the DC-9 plane, La Tabla continues:

Brent Kovar heads a conglomerate of companies called Sky Way Communications Holding, of which Geffon was a principal shareholder. Those companies include Sky Way Aircraft, the name of which was stamped on the DC-9, imitating the emblem of the United States government aircraft.

In 2005 Kovar filed for bankruptcy of Sky Way Communications Holding, and Geffon went ahead and reached an agreement as an alleged creditor that allowed him to have three aircraft, including the DC-9.

This procedure was challenged by other creditors, who obtained an order to prevent Geffon from being able to sell or export the aircraft. Despite this, he successfully managed to get all the necessary documentation so that on April 5, 2006, a plane could be flown to Venezuela. Geffon also managed not to be investigated or sanctioned by the authorities.

Moreover, the fact that his plane had been captured with drugs valued at more than $100 million in a neighboring country was not even investigated by US authorities.

As if this were not enough, Geffon managed to get the FAA to settle a transfer of Cocaine One to an unknown buyer from Venezuela, which was carried out on April 13, 2006, that is, three days after its seizure in Campeche.

The passing of the DC-9 through Maiquetía gave the United States the perfect excuse to raise accusations of drug trafficking against the Venezuelan government of President Hugo Chávez.

In order to hide from media spotlight all connections between US officials, drug traffickers and a company with shady deals, “the story of the seizure of the aircraft in Mexico was modified, and an alleged Venezuelan or Mexican buyer identified as Jorge Corrales appeared in the narrative.” The reconstructed narrative also “ended up involving drug trafficker and businessman Walid Makled in the matter,” stated La Tabla in its 2017 article.

RELATED CONTENT: What is Behind Capture of ‘El Pollo’ Carvajal in Spain?

“The Chicken” in the sauce
Although anti-Chavista media and the US government have tried to involve Venezuela through a kind of fanciful story that links terrorism, drug trafficking and dictatorship, the facts indicate that Hugo Carvajal, whether or not directly involved in the allegation made before the New York Court, is not such an innocent party in terms of his connection to the CIA and its illicit drug dealings.

In his book Barry and the Boys, Hopsicker tells the story of Barry Seal, an American smuggler and drug trafficker linked to the CIA who was assassinated in 1986 after he had publicly threatened to reveal and publish his testimony of the involvement of the US federal government in the global narco trade. “The United States government transports more drugs than all Latin American drug traffickers,” said Hopsicker in an RT program in 2014.

A previous investigation by Misión Verdad had tracked down all the evidence that can show that the United States is a narco-state, with the CIA and the DEA playing a leading role. This becomes especially clear when the involvement of US intelligence agencies in the Iran-Contra case is taken into consideration.

So Carvajal’s potential links with drug trafficking and the CIA do not look so far-fetched, in light of the investigations.

La Tabla reviewed an interview that Walid Makled gave to anti-Chavista journalist Casto Ocando. According to Makled, when Carvajal was head of Venezuela’s Directorate General of Military Counterintelligence (DGCIM), he had paid bribes to Carvajal’s “relatives” to pass drug shipments through Maiquetía airport.

It is, however, pertinent to point out that there are no records that indicate that Carvajal has any assets abroad. This has been extensively verified in the United States, Spain and Panama.

On the other hand, former General Haissam Dalal Burgos does appear as director of a company founded in 2010 in Panama.

Although the Makled interview is full of ambiguous data in regard to drug trafficking and Venezuelan government officials, La Tabla, with emphasis on Carvajal, was able to confirm not only the previous information but also to cast doubt on a US version of the events that states that Maiquetía airport’s Ramp Four—used by Venezuela’s presidential aircraft—was also used by the DC-9.

“There is no evidence for the presidential Ramp Four story,” reported La Tabla in its investigation. “On the contrary, testimonies of the workers of the NF04 firm that serviced the aircraft at the Simón Bolívar International Airport refer only to the use of Ramp Seven. The same was stated by LASER airline technicians who informally made some repairs on the DC-9.”

La Tabla was also able to confirm, through the National Anti-Drug Office (ONA), that it was impossible that the shipment seized in Mexico in 2006 could have been loaded in Venezuela.

“There are no elements that could guarantee that the drug, which was in suitcases placed on the seats, had been loaded in Caracas,” wrote La Tabla in said article. “And the ONA authorities determined that the plane was diverted to Colombia, landed in Barranquilla, where it must have loaded the five and a half tons of cocaine. The plane was also refueled there (since it did not have enough) and continued on its way to Mexico.”

La Tabla gives more information on the plane and the drug:

According to an article in the Mexican magazine Proceso, the DC-9 arrived at the Ciudad del Carmen airport in Campeche, at 11:45 a.m. on April 10, which gives an approximate flight time of seven hours.

According to Venezuelan investigations, this is impossible—the plane cannot have a flight range of seven hours. Under this logic, according to the Venezuelan intelligence report, “the plane had to have landed somewhere in order to refuel and get to Mexico. The fuel loaded in Venezuela was not enough.”

There are more reasons to take into consideration. “The period of flight from Venezuela to Ciudad del Carmen (Mexico) is three hours, with a four hour difference remaining. Captain Miguel Vicente Vázquez Guerra marked a specific air route in his flight plan which did not establish passing through Colombian territory, and he himself deviated the flight using a route that passes through Colombian airspace.”

This has been corroborated by a recording between the DC-9 pilots and the control tower in Barranquilla, Colombia, in which the plane requests authorization to land, presumably due to an emergency, and they did land at that terminal. According to the National Anti-Drug Office of Venezuela, “this is where the cocaine shipment that arrived in Mexico, hidden in more than 100 suitcases, was uploaded.”

This version makes much more sense, taking into account that Venezuela is not a cocaine-producing country, while Colombia is the largest producer in the world.

Facing the US drug trafficking accusation, Carvajal had confirmed in February 2017 his “firm decision to go to the United States to testify, when and only if the arrest warrant against me is lifted.”

Carvajal’s reputation collapsed not only because of the drug trafficking accusations, but also because of his support for the US strategy which crystallized in the “Guaidó project,” the legacy of which has been to attack and rob Venezuela from all possible flanks. Although anti-Chavismo might want to pass the blame of Carvajal’s probable crimes on the Bolivarian government, these seem to correspond more to the United States’ anti-Venezuela agenda.