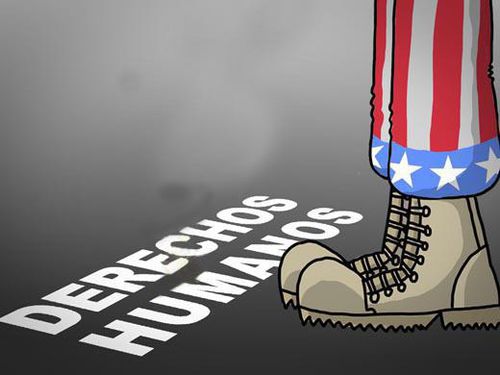 An outstanding characteristic of the Western human rights industry has long been the way it politicizes its production to serve the foreign policy needs of its countries’ governments. To that end corporate and government investors fund leading industry producers like Amnesty International, Human Rights Watch, Freedom House or the International Federation for Human Rights. The formal reports and social media content of these producer organizations downplay abuse and violations by governments supported by NATO and allied country governments. By contrast, these Western NGOS exaggerate or even invent human rights abuses in countries targeted by their countries’ governments.

In Latin America, widespread abuses under right wing regimes in, for example, Colombia, Honduras, Haiti or Brazil get mentioned in low key terms, if at all, while false claims by US funded opposition groups in Cuba, Nicaragua and Venezuela are amplified and broadcast with minimal or zero effort at responsible corroboration. Neither the human rights industry itself, nor the communications media and academic industries which are its main consumers, make any serious effort at investigation because they too are funded by the same or similar corporate and government investors as their human rights industry brand name suppliers.

Given the close integration across these various Western knowledge and information industries, it has been impossible for them to avoid complicity in the criminal support of their governments for terrorism and organized crime around the world. In Latin America, Bolivia, Cuba, Venezuela and Nicaragua are the clearest examples of this reality. In Nicaragua’s case, the violent failed coup attempt of 2018 involved the use of both terrorism and organized crime by US funded and directed proxies. Abundant material exists, for example here and here, based on reliable, often first-hand sources that narrate and document very serious crimes and egregious human rights abuses in Nicaragua by the violent US funded opposition between April and July 2018

All of these definitions apply to the violent actions of Nicaragua’s US funded and controlled opposition in 2018. They and their US funders and strategists sought to overthrow Nicaragua’s democratically elected government. They used the threat of violence and actual acts of violence to create fear to achieve the political change they sought. They used illegal force, violent extortion and murder to coerce and intimidate innocent people to achieve their political objectives. Furthermore, the UNODC Module Series explains that the UN Convention against Transnational Organized Crime defines organized crime as “A structured group of three or more persons, existing for a period of time and acting in concert with the aim of committing one or more serious crimes or offences established in accordance with this Convention, in order to obtain, directly or indirectly, a financial or other material benefit.”

The Convention defines a serious crime as any offence punishable by at least four years imprisonment. Likewise, among the Convention’s definitions of transnational organized crime is any offence committed in one State but when a substantial part of its preparation, planning, direction or control takes place in another State. All these definitions apply to the violent crimes of the US funded Nicaraguan opposition in 2018. Among the crimes prosecuted by the Nicaraguan authorities many of which have been independently documented and corroborated, figure multiple cases of arson, extortion, hostage taking, serious assault causing grievous bodily harm, robbery with violence, torture and murder.

When in 2018 Nicaragua’s Vice-Foreign Minister Valdrack Jaentshcke asked then head of the Inter American Commission for Human Rights delegation to Nicaragua, Paulo Abrao, why the IACHR refused to investigate opposition killings of police officers and government workers, Abrao replied that they fell outside the IACHR mandate because IACHR doctrine was that human rights can only be violated by States. Later, when the Nicaraguan authorities defeated the terrorist coup attempt and applied due process to prosecute those guilty of the opposition’s violent crimes, the IACHR and the rest of the Western human rights industry rose up and accused Nicaragua’s government of mounting political prosecutions.

To the contrary, the material brought together in the UNODC Module Series is very helpful in terms of revealing the nature of the unquestionable systematic crimes committed by the US funded political opposition in Nicaragua during 2018. For example, the 1979 International Convention against the Taking of Hostages expressly asserts that taking hostages is a terrorist act. It defines a hostage taker as “any person who seizes or detains and threatens to kill, to injure or to continue to detain another person in order to compel a third party, namely, a State, an international intergovernmental organization, a natural or juridical person, or group of persons, to do or abstain from doing any act as an explicit or implicit condition for the release of the hostage”.

In relation to the funding of terrorism, the UNODC notes that “The 1999 International Convention for the Suppression of the Financing of Terrorism has far- reaching implications for investigating and punishing criminal financial activities used to fund acts of terrorism. Within the framework of this Convention, a person commits a criminal offence if they: [B]y any means, directly or indirectly, unlawfully and wilfully, provide or collect funds with the intention that they should be used or in the knowledge that they are to be used, in full or in part, in order to carry out: […] (b) Any other act intended to cause death or serious bodily injury to a civilian, or to any other person not taking an active part in the hostilities in a situation of armed conflict, when the purpose of such act, by its nature or context, is to intimidate a population, or to compel a government or an international organization to do or to abstain from doing any act.”

Victim testimony and media reports confirm that US funded terrorist criminals and human rights abusers like Felix Maradiaga, Eva Coppens, Francisca Ramirez and Medardo Mairena all committed terrorist crimes in 2018 in Nicaragua. Even so, they and other terrorist criminals have been feted by the Western human rights industry as heroic defenders of human rights. While certainly outrageous, this fact is far from surprising, since the US authorities and their NATO country vassals have been sponsors and funders of terrorism against various target governments and countries for decades. One way or another, governments and corporate interests fund their accomplices in the Western human rights industry and in both the related knowledge and information industry in Western universities and the communications industry of Western corporate and alternative media. Beyond Nicaragua, in their reporting of events from Syria to Venezuela or Iran to Ukraine, they are all guilty to one degree or another of promoting terrorism and covering up organized crime.