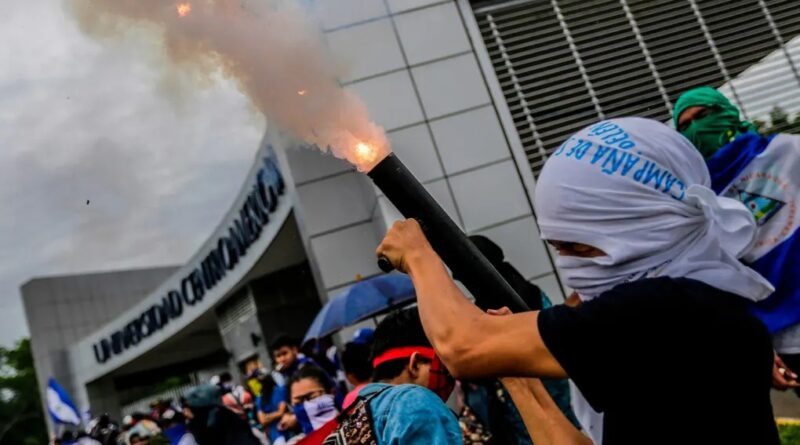 A group of people in solidarity with Nicaragua’s Sandinista Revolution have recorded, transcribed and translated the testimonies of over 30 people of different backgrounds about their experience of the violent failed coup attempt in Nicaragua between April and July of 2018.

No human rights organization and practically no journalists, writers or academics out of all those who have written so glibly about the crisis of 2018 in Nicaragua have taken the trouble to talk to any of the thousands of victims of violent opposition attacks during that crisis.

Among well known writers, the only exceptions of which we are aware are the Italian journalist Giorgio Trucchi, Max Blumenthal and Ben Norton of the Grayzone, the writer and human rights lawyer Dan Kovalik, the independent journalists Dick y Miriam Emanuelsson, John Perry, Steve Sweeney of Morning Star and the Redfish documentary company video team.

The very simple reason for this reality is that the mainstream account of the violent failed 2018 coup attempt in Nicaragua, repeated also by many so-called alternative media, portrayed the very opposite of what really happened.

International human rights institutions like the Inter American Commission for Human Rights and the Office of the UN High Commissioner for Human Rights completely ignored opposition violence so as to be able to claim with the utmost falsehood that the government crushed peaceful protests with disproportionate, brutal violence.

That is a shameless lie. These institutions appear to have promoted that lie under pressure from the governments of the United States and the European Union

The testimonies gathered here demonstrate the undeniable false witness of these international institutions, of human rights NGOs and international news media, who comprehensively failed to report facts they found inconvenient.

A recurrent theme in gathering these testimonies is the total lack of interest in the experiences and suffering of the people concerned on the part of representatives and researchers of the Western human rights industry.

Three things are important to understand in order to make sense of these interviews.

Firstly, the testimonies refer almost exclusively to incidents that took place while Nicaragua’s police were confined to their stations.

On April 22nd President Ortega publicly asked the Catholic Bishop’s Conference to serve as mediators of a national dialogue between the government and the opposition.

The bishop’s took two weeks to reply and, when they did, they set various conditions one of which was that the police be removed from the streets.

The Nicaraguan government agreed to this condition prior to the talks starting on May 16th and this explains why the general population was exposed over so many weeks to violent attacks and intimidation by opposition activists as described in these testimonies.

A second important point to understand is the operation of the so called “tranques” or roadblocks set up by the opposition activists at strategic points both in Nicaragua’s national highway system and within urban centers.

These roadblocks served as bases for the opposition to carry out their crimes and as control points to intimidate, monitor, rob and extort anyone passing through them, as these testimonies vividly describe.

The roadblocks were operated by opposition activists and paid delinquents who often ended up fighting among themselves over what they stole from all the people they extorted before letting them pass.

A third recurrent theme in these interviews is the issue of the 2019 amnesty setting free all the opposition activists and their delinquent accomplices charged, tried, convicted and imprisoned for criminal offenses committed during the 2018 crisis.

For bereaved families and for people who suffered directly from opposition violence in 2018, it took a huge act of faith on the part of Nicaragua’s people in the wisdom of President Daniel Ortega, Vice President Rosario Murillo and their government for that measure to be as successful as it has been..

That is why for people in Nicaragua all the victims and relatives of victims of opposition violence during the failed coup attempt are regarded as Heroes of Peace because they put the need for their country to heal and reconcile above their own personal suffering and grief.

But that is something far beyond the pitiful moral understanding, wholesale intellectual abdication and sly cynicism of practically all North American and European media journalists and editors, university academics, functionaries of the OAS and the Office of the UN Human Rights Commissioner or any of the leading international human rights NGOs.

These testimonies focus on victims of the so-called Rural Workers Movement, a small organization whose aggressive leaders, like Francisca Ramirez and Medardo Mairena, deliberately project a false image that they represent a large number of rural workers in Nicaragua.

In fact, local people calculate the core membership of the Rural Workers Movement at no more than around 2000, although by means of payment, intimidation and disinformation their protest marches occasionally mobilize many more.

By comparison the long established Association of Rural Workers (ATC) is a genuinely national organization with over 47000 members. Nationally, there are over 5300 registered cooperatives, mostly in the agricultural and livestock sector, with more than 350,000 members. Not one of those cooperatives is of the Rural Workers Movement.

This movement initially began supposedly in protest against Nicaragua’s proposed interoceanic canal. To promote herself as an important rural workers leader Ramirez boasts of having organized over 80 protests involving many thousands of people. At the same time she makes the contradictory claim that she is the victim of a dictatorship that denies freedom of speech.In any case, she has never developed her movement’s base significantly. The main area in which Ramirez and Mairena have mobilized support is the stretch of land between the area around El Tule on Lake Nicaragua’s eastern shore and the area south of Bluefields where the canal is planned to enter the Caribbean Sea.

This resulted partly from a mis-named land reform by the Somoza dictatorship which cleared landless rural families from areas on the Pacific Coast where the ruling Somoza clique wanted to grow cotton during the boom in cotton prices of that time. But many families made homeless following the 1972 earthquake were also effectively dumped in Nueva Guinea..

Many hundreds of families were moved to Nueva Guinea at different times during that period. They were settled on land with practically no support or amenities, resulting in an extremely impoverished population with no access to adequate health care or education.

Geographically, the area is still difficult of access, with poor road communications, especially around the municipal boundary between Nueva Guinea and Bluefields. This makes effective security provision for the local population by the police extremely difficult.

These geographical characteristics combine with a socio-economic profile very favorable for an organization like the Rural Workers Movement, enabling its leaders to cloak their criminal activities with a right wing political discourse.

Historically, the region has been a bastion of the right wing Liberal Constitutional Party (PLC). During the 1980s the US backed Contra fighters contested control of the area with the Sandinista army. The patterns of that history prevail to this day.

Medardo Mairena was elected as a councilor to the Regional authority of the Southern Caribbean Autonomous Region. A leading accomplice of Mairena, Pedro Mena, has been a PLC municipal councilor. Francisca Ramirez Torrez and her partner Migdonio López Chamorro have also both been long standing activists of the PLC.

During the 1980s, López Chamorro was a comandante in the ARDE branch of the Contra based in Costa Rica, with the nickname “Brasita”.

While Medardo Mairena and Francisca Ramirez project themselves overseas as noble fighters on behalf of impoverished rural families and as victims of unjust repression, their image locally is very different.

Mairena lost his Costa Rican residency and was expelled by the Costa Rican authorities accused of people trafficking.

Ramirez and her family, far from being impoverished peasants, are registered by the local police in Nueva Guinea as owning two large cattle trucks and a very expensive Toyota Land Cruiser SUV. Local people say she and her family own between 500 and 700 acres of land.

As of September 2020, Ramirez and her family are involved in litigation in Costa Rica over property she is alleged to have usurped from a local landowner there, as well as accusations of corrupt use of funding to help alleged “refugees” from Nicaragua.

Thanks largely to coaching and support from, among others, Monica Baltodano and her daughter Monica López via the Baltodano family’s now closed down NGO Popol Na, Ramirez and Mairena have also accessed substantial funding totaling certainly many hundreds of thousands and possibly millions of dollars.

Funding has come both directly from discretionary USAID funds managed by the US embassy in Managua and from foreign human rights NGOs like Ireland’s Frontline Defenders, among others. Ramirez and Mairena are totally opaque about how much money they have received and its use.

The witness testimonies collected here demonstrate that in practice the Rural Workers Movement operates effectively as an organized crime operation.

Ramirez and Mairena and their accomplices use extortion, menaces and outright murderous violence to intimidate local rural families into supporting them and keeping quiet about their crimes.

Medaro Mairena was tried and sentenced to long prison terms as the intellectual author of teh massacre in El Morrito of July 12th 2018 in which thugs organized by himself and Francisca Ramirez murdered four police officers and a primary school teacher. He was set free in 2019 under the terms of one of the the controversial government amnesties of that year.

These witness testimonies from a wide variety of ordinary people victimized by Rural Workers Movement activists and their accomplices confirm that ever since the first big anti-canal protests of 2014, the Rural Workers Movement has been relentlessly violent, essentially adapting the terrorist practices of the 1980s US-trained wartime Contra to further their contemporary political agenda.

That criminal violence reached a crescendo in 2018 when Ramirez and Mairena operated systematic roadblocks extorting huge amounts of money from local people seeking to go to work, study, do business or seek health care.

Police sources in the area calculate that the amount extorted daily by Mairena and Ramirez at the roadblocks they controlled and from other illicit activities may have averaged as much as US$50,000 over around 80 days from the end of April to early July 2018, implying a possible total amount extorted of around US$4 million.

The testimonies gathered together here present the bitter truth about the activities of Francisca Ramirez, Medardo Mairena and their accomplices in the Rural Workers Movement.