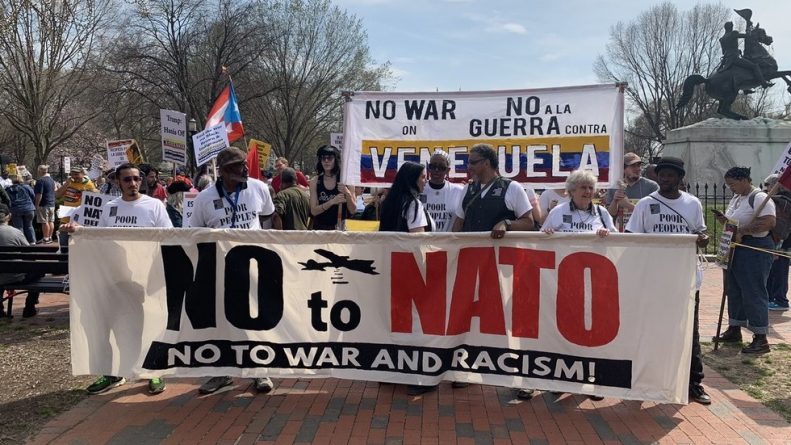 Hundreds of people have taken to the streets of Washington, DC to oppose the upcoming NATO ministerial meeting in the US capital. The demonstrators also decried the continued US involvement in the Venezuelan political crisis.
The march was aimed at showing “mass popular opposition to NATO, wars, racism and US aggression against Venezuela,” the National Mobilization Steering Committee, a loose, ad hoc coalition of activists representing dozens of peace movements and action groups, said in a statement.

Hundreds of activists from around the world are gathered in front of the White House to denounce NATO and call for #HandsOffVenezuela pic.twitter.com/lhAyJ7JOjp

Demonstrators gathered at Lafayette Square in front of the White House and then marched through the area, stopping near the offices of the International Monetary Fund (IMF), the World Bank, and the Organization of the American States (OAS), which the demonstrators also hold partly responsible for the “imperialist” policies of the West. They also marched past the Washington mayor’s office to address local issues, and the Customs & Border Enforcement office to highlight the plight of Latin American asylum seekers coming to the US.

“Money for jobs and education, not for wars and occupation!” #No2NATO #HandsOffVenezuela pic.twitter.com/njJLP5XR4p

March stopping now outside the headquarters of the World Bank, responsible for the plunder of countries around the world. World Bank hands off! #No2NATO #HandsOffVenezuela pic.twitter.com/3g9lO3GlzD

“From Palestine to Mexico these racist walls have got to go!” #No2NATO #HandsOffVenezuela pic.twitter.com/kUhTsd2CED

The protesters held placards and banners that read: “No to NATO, No to war and racism,” “Unite to fight NATO’s racist wars,” “NATO Bombs=Slavery in Libya,” “NATO Killed One Million Iraqis,” and “Shut Down NATO’S War Crimes.”

Some slogans also referred to the continued US pressure on Venezuela, where Washington supports self-proclaimed ‘interim president’ Juan Guaido, who seeks to depose the elected leader, Nicolas Maduro. The slogans read: “Hands off Venezuela,” “No war on Venezuela,” and “US Sanctions Caused Venezuela’s Crisis.”

#No2NATO #HandsOffVenezuela march stretches for blocks of DC streets as far as you can see! Solidarity to defeat US imperialism & the NATO war machine! pic.twitter.com/SwWH42FjqN

“Down with the empire!” Some of what I’m seeing at this #No2NATO rally outside the White House.

Anti-war organizers are kicking off a week of protests around the 70th anniversary of the North Atlantic Treaty. @N2Sreports pic.twitter.com/iPncXbFBJa

Military veterans from the DSA in Connecticut join the Metro DSA (along with other activists) in Washington D.C. to say “No to a Rich Man’s War!” in Venezuela or elsewhere. This is the beginning of a week-long series of “Unwelcome NATO” events. #No2NATO #HandsOffVenezuela pic.twitter.com/ohjNL9O11q

The meeting of NATO foreign affairs ministers is scheduled for April 3 and 4. It marks the 70th anniversary of the alliance.