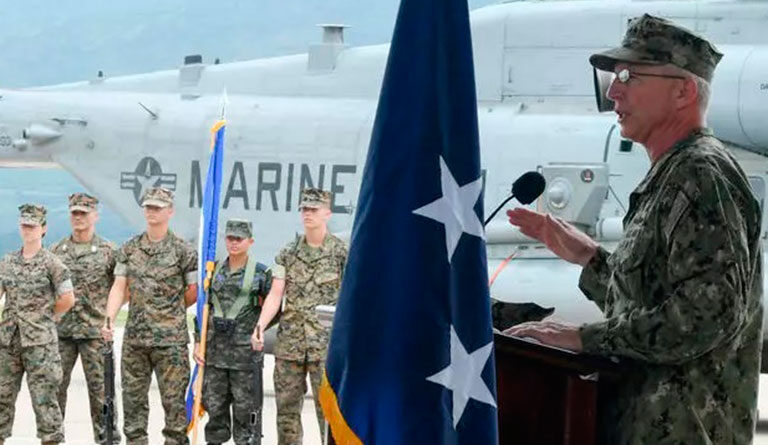 Venezuelan Foreign Affair Minister Jorge Arreaza reported on Monday that the most recent statements by Admiral Craig Faller,  head of the United States Southern Command (SOUTHCOM), regarding Venezuela, will be added to the appeal filed before the International Criminal Court (ICC) to demonstrate the systematic and generalized attack by Washington against the country, which constitutes a crime against humanity.

“They admit more US plans to illegally overthrow, through force and sanctions, the Government of Venezuela. We will incorporate this confession from Faller, Head of the Southern Command, into the complaint filed at the #ICC. #Sanctions are a crime against humanity”, the foreign minister published on his Twitter account.

According to an AFP review, Faller said that “it took a generation to get to this point and it will take time to unpack the democratic framework of “envoy” (Elliott) Abrams,” the US official in charge of promoting regime change in Venezuela.

Faller added that Maduro remains in power -allegedly- thanks to external factors made up of Cuba, which provides intelligence services; Russia, which provides economic and military aid; China, which is its main creditor; and Iran, which is supplying oil.

“He is just repeating the same script used by the US regime for over a decade against Venezuela (and without saying that) before President Maduro they did the same against President Chávez, not realizing that the Bolivarian Revolution goes beyond the international support or the military support to the Venezuelan president, and without acknowledging the existence of million (or millions of) Venezuelans who consider themselves Chavistas and will defend their country no matter what,” a political analyst told Orinoco Tribune.