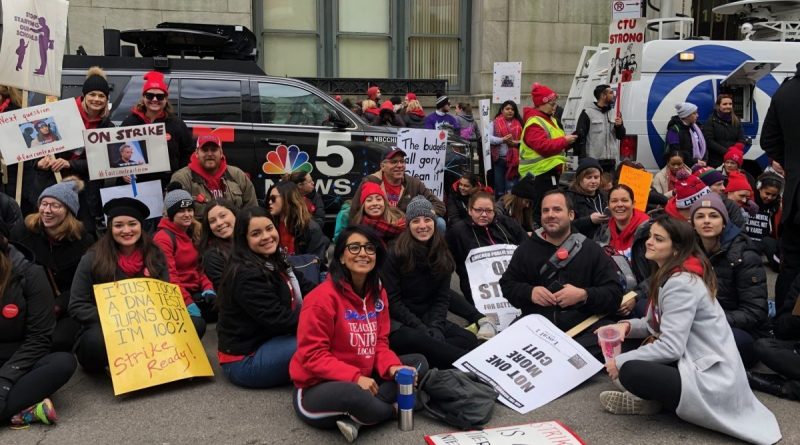 Multiple teachers reported being spit on from people above them in the Board of Trade while they marched Wednesday.

Teachers have been getting honks of support and fists of solidarity while striking throughout the city this week.

Of course, not everyone is a fan of the strike — but several people working in the Board of Trade building took their opposition too far Wednesday, teachers say: They spat on picketing teachers.

The incidents happened as tens of thousands of teachers protested Downtown during Mayor Lori Lightfoot’s budget address Wednesday. Members of the Chicago Teachers Union have been on strike since last week in a bid to get smaller class sizes and more counselors and nurses in schools, among other things.

Jendy Barnes, a special education teacher at Peterson Elementary School in North Park, was among the marching teachers Wednesday morning when she felt something hit the side of her face near the Board of Trade Building, 141 W. Jackson Blvd. She looked up and saw more things coming down — what appeared to be “little droplets, almost white in color.”

“Wait, did you just see that?” Barnes asked a teacher beside her.

Then Barnes noticed a friend in front of her had a “glop” of what looked like spit on her jacket.

Barnes wasn’t sure what the liquid was and didn’t think much of it; it wasn’t until later, when she was home and reading Facebook posts from other teachers about being spit on near the Board of Trade, that she became certain she, too, had been hit from someone in the building above.

It’s “almost unfathomable” and “completely shocking” adults working in the Board of Trade Building would spit on teachers, Barnes said.

“I’ve been spit on before; I’m a special ed teacher,” said Barnes, who works with 5-year-olds in kindergarten. “Usually I’m spit on because I work with children who don’t know how to cope and that’s their mechanism of getting back at me. I wouldn’t expect it from a grown adult in such a calculated manner.”

Andy Currie, who teaches at Mather High School, saw a similar incident when he was marching near the Board of Trade Building that morning. He was walking when, out of the corner of his eye, he saw liquid come down and then saw Northside College Prep teachers get hit by a large amount of spit.

There was so much spit Currie thinks it’s possible the harassers worked together or even spit into a cup and then dumped it on the teachers.

“I thought maybe a seagull had pooped or something like that, but it became quite apparent that it was spit,” Currie said. “And with that amount I don’t know if it was a coordinated effort … .”

These were dropped on our members as we marched past Board of Trade yesterday. We can only imagine how they view the Black and Brown children we teach. This is why we fight. If we don’t defend our own, who will? #ctuseiustrike #ctuseiutogether #faircontractnow #putitinwriting pic.twitter.com/xvSMOfsiM7

The teachers who got hit were visibly upset and everyone was shocked, Currie said. Some looked up at the building and shouted, but they couldn’t see who had spit at them.

Three other teachers — Kat Paddock of Beidler Elementary School, Scott Plencner of Taft High School and Lynn Bailey of North-Grand High School — also said they’d been marching Wednesday when they were spit on in front of the Board of Trade building.

Plencner, who laughingly noted he’s bald, said he felt warm liquid repeatedly hit his head and said it was white and bubbly — meaning it wasn’t water or rain.

“I didn’t see spit come out of somebody’s mouth, but that wasn’t water,” he said. “That’s what happens when you take a stand.”

Bailey said, like Barnes, she noticed the liquid but didn’t realize it was spit until other teachers started talking about how they’d been spit on. She’s “totally disgusted.”

“If you don’t agree with us that’s fine, but we don’t deserve to be spit on,” Bailey said. “There are so many other ways to voice your opinion toward us and that is not one of them.”

It’s not the first time the striking teachers have had run ins with traders. Last week, the CTU tweeted that members were marching past the Board of Trade when people dropped fliers that said things like, “Work 12 Months !!” and “We want Full Time TEACHERS !!”

The spitting and flier stunts were “immature,” Paddock said, and they show how out-of-touch the people behind them are: They were wasting paper even while teachers have to buy their own for classroom use.

CME Group Inc., the global markets company which is headquartered in the Board of Trade building, did not immediately comment on the incident.

Barnes said the spitting incident was deeply disheartening but she hasn’t received much harassment otherwise. And she suggested even those who disagree with the strike’s purpose should try to have a conversation with teachers, not spit on them.

“You have a conversation if you disagree; you don’t harm somebody or you don’t spit on them,” Barnes said. “That’s not how the world works.”

Similarly, Currie said the incident was “disappointing,” especially when other people merely watched the march or waved at protesting teachers from their windows. But it didn’t stop them, he noted.

“The support has been amazing and far more than any cases of negative comments, but I think in the Financial District there have been some isolated cases” of harassment, Currie said. “But there’s also support for teachers around there.

“But who does that? Who spits on people out of a window? Who thinks they are licensed to do that?”

Featured image: Jendy Barnes (red hat on left) was marching Wednesday near the Board of Trade when someone spit on her and other teachers, she said. 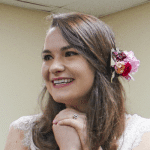