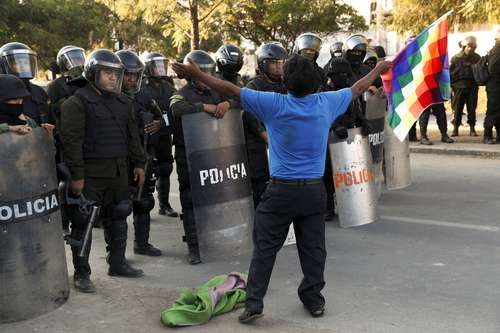 La Paz. The Bible, says Aymara leader Gonzalo Quenallata, is only an ornament in the hands of Bolivia’s de facto government . In the name of God they are killing us, they are shooting at us, they are massacring us.

He is surrounded by dozens of red ponchos that endorse each of his words with slogans. They shout against the police and the military, against the ultra-right Luis Fernando Camacho and against the self-proclaimed president Jeanine Áñez.

The natives fill the streets that surround Plaza Murillo, the center of Bolivian political power. Quenallata synthesizes what men and women say here and there, after their march, when they meet in small circles to deliberate and to speak, after the corresponding introductions, only with the foreign press, because they don’t want anything to do with the Bolivian media.

“We are fighting because our whipala (the multicolored flag that represents the country’s ethnic plurality) has been burned by the Bolivian national police.

“We demand the departure of the alleged president …

For 13 years we have lived what they call dictatorship and now, in full “democracy”, in less than a week there are more than 25 dead .

The Aymara leader is asked if behind the coup is what the vice president in exile, Álvaro García Linera, defines as hatred of the Indian .

He nods and continues: “The great problem of our president has been to be an Indian, so from here I want to tell you, the Indians here are here and from here the message to our brother president is to take care of himself… I thank the Mexican brothers who have him there well kept”.

The score of people with whom we spoke are excited when they talk about the president in exile, some even with tears in their eyes. Everyone calls him “the Evo” , and they say to him what the man in the red poncho sums up: With more than 80 percent, that we are by your side, brother President, we would like you to come back .

Most of the victims of repression have fallen in Cochabamba, the bastion of Evo Morales, president of Bolivia in exile.

In the capital the blockades that remain in the crowded city of El Alto have ceased, despite calls for dialogue from the coup government. Calls, of course, accompanied by threats to former government officials, legislators and leaders of the Movement to Socialism, Evo Morales’ party.

The effects of the mobilizations in other parts of the country, however, reach the capital not only in the outrage of the protesters, but also in the shortage that has left the city without garbage collection service, the service stations without gasoline, the fonditas without gas and the tables of the La Paz without chicken, beef and some fruits.

The political crisis is also on the walls. Although only one side remains in the streets, the graffiti commemorates the clash that arose with the October 20 elections.

RELATED CONTENT: Bolivia: Agreement with the Dictatorship for New Elections – Were There Real Conditions to Achieve Something Better?

My vote counts, Indians , reads a wall very close to the Mexican embassy, ​​where 24 people are refugees, among them high officials of the Morales government.

A few streets away, the arrival of a truck loaded with chickens causes a long line that turns the block. People were still in line despite the fact that the product would obviously not reach everyone.

In front of the chicken line, as in the whole city, the remains of the street battle survive. You paint and more paint for and against Evo Morales. Evo bastard , “Evo narco “, Evo echocida , some say, and on top of that someone stuck copies of the letter with which Morales resigned his position on November 6.

” Fucking Pacos (Pigs)”, reads in the vicinity of a university, in downtown La Paz. Of course, a pint before the time when the pacos (police) turned to President Morales, preamble of the military suggestion to leave power.

On the other hand, supporters of the MAS government left their mark on the battle: Mesa lies , referring to the former presidential opposition candidate. Coup plotters, racists, bastards , the three words with an elastic strikethrough.

In the center, protesters entering the Lanze Market, from pure food stalls, have difficulty sitting: most businesses are closed simply because they have no gas for cooking.

In the black market, gasoline is obtained (less and less) at three times its normal price and the same goes for food.

On the radio, a program of beauty and kitchen tips is interrupted by announcements from the mayor’s office that ask the inhabitants of the city not to take out the garbage from their homes.

Then, the broadcasters spend a long time asking the inhabitants of Los Altos to denounce the people who force them or threaten them to attend marches in favor of Evo Morales. The drivers, laughing, provide the 800 phone number that the police have enabled for such complaints.

The brief government of Áñez has specialized quickly in the double game. While calling for dialogue, he says he is looking for formulas to go to new elections without agreement with the MAS, the majority political force (it has two thirds of Congress).

Arturo Murillo, Minister of Government, announces the creation of a special body of the prosecution to go against legislators who promote acts of subversion and sedition , while saying that they will make their names known.

Hours later, Karen Longaric, Foreign Minister of the self-proclaimed president, says they will grant permits for the 24 people who are refugees at the Mexican embassy.

Will they travel to Mexico? It may be, but yesterday at noon this newspaper witnessed the entry of a truck with food to the diplomatic headquarters.

Featured image: Supporter of Evo Morales confronts police elements in Sacaba, a town located on the outskirts of Cochabamba, the bastion of the ousted president. AP