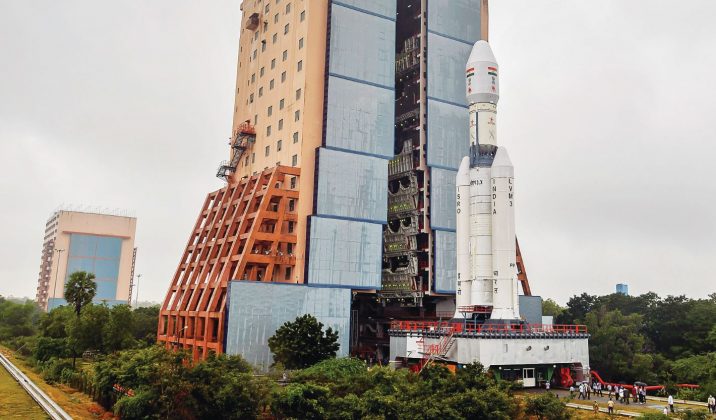 India, according to Indian Space Research Organisation (ISRO) chief K Sivan, is planning to launch its own space station. This ambitious project will enable the agency to send more humans to space when executed. The country, as per the ISRO chief, will not join the International Space Station (ISS). After Chandrayaan Mission 2, also known as Moon Mission 2, the Indian Space Research Organisation (ISRO) will launch another mission to the Sun by launching Aditya-L1 in the first half of 2020, Sivan said.

Another interplanetary mission to Venus will be launched in the next 2-3 years, Sivan, who is also the Secretary, Department of Space, said. Elucidating on the space station project, Sivan said the mission will also be an extension of the Gaganyaan project. “We have to sustain the Gaganyaan programme. So, subsequently, as a long-term plan, we are planning to have the space station in India. We are going to join the international community in manned missions to moon, asteroids. We have a clear plan for the space programme,” Sivan said.

“We are planning to have a separate space station. We will not be a part of … (ISS). Our space station is going to be very small. We will be launching a small module and that will be used for carrying out microgravity experiments,” said Sivan. The weight of the space station is likely to be 20 tonnes.

By planning a space station, the ISRO is “not thinking of space tourism”, he said, adding that the proposal will be sent to the government for approval after the first Gaganyaan mission by 2022 and it is looking at 5-7 years time frame for execution of the programme. He did not elaborate the cost of the proposed Indian space station.

A space station is a spacecraft capable of supporting crew members, designed to remain in space for an extended period of time and for other spacecraft to dock. Currently, there is only one fully functional space station in the Earth’s lower orbit, the International Space Station and astronauts conduct different experiments in it.

The first component of the ISS was launched into orbit in 1998, and first long-term residents arrived in November 2000. The International Space Station is a partnership between European countries represented by European Space Agency, the United States (NASA), Japan (JAXA), Canada (CSA) and Russia (Roscosmos). It is the world’s largest international cooperative programme in science and technology.

Elaborating on Aditya L1 mission, Sivan said the mission will study the corona of the Sun, which is the outermost part of its atmosphere. “It is 1.5 million kilometres from the Earth. It will always look at the Sun and give analysis of corona because it has a major impact on climate change,” he said.

On the ISRO’s mission to Venus, he said the planet is a “burning body with very high temperature”. “Most missions have failed. We want to succeed and study atmospheric composition of the planet,” he said, planning that they have set a target of 2-3 years to launch the mission. France is also collaborating with India on its mission to Venus.

In April, India had scripted history by successfully launching EMISAT, a military satellite, and 28 foreign nano satellites on-board its polar rocket from Sriharikota, in a complex mission which marked many a first for ISRO. The rocket, PSLV-C45, in its 47th mission, injected the 436 kg EMISAT, aimed at electromagnetic measurement, and 28 co-passenger satellites belonging to Lithuania, Spain, Switzerland and the United States, into their designated orbits, ISRO said.

The rocket lifted off majestically in clear skies bursting orange flames at 9.27 am on April 1 from the second launch pad at this spaceport at the end of the 27-hour countdown. The mission marked several firsts to the credit of ISRO as it manoeuvred satellites in various orbits and orbital experiments including on maritime satellite applications.

EMISAT is meant for electromagnetic measurement, ISRO said while declining to reveal any further information about the satellite.

“Enormous amount of work is behind this excellent success… the work is really contributed by each and every one of the ISRO team members. Let me complement and congratulate ISRO team members as well as their family members for making this particular mission a grand success.”

Noting that the industry played a major role in the PSLV-C45 mission, he said, nearly 95 per cent of the hardware for this mission was fabricated outside ISRO, that is industry. “Nearly 60-70 per cent of the satellite components were fabricated outside ISRO. In fact the payload for this particular satellite is fabricated in one of the electronic industries in Bengaluru,” he said and thanked the industries for providing help.

PSLV, also used in India’s two key missions — “Chandrayan” in 2008 and Mars Orbiter in 2013, is a reliable and versatile launch vehicle for ISRO with 39 consecutive successful flights till June, 2017 and five-in-a row from January 2018.

In April 1 mission, ISRO scientists had placed the satellites and payloads in three different orbits. After injecting the primary satellite EMISAT around 17 minutes from lift off in a 748 km orbit, they restarted the fourth stage twice. During this initiative, all the other 28 customer satellites, totally weighing about 220 kg, were released one-by-one by lowering the fourth stage to around 504 km orbit. “This process took about 160 minutes for ISRO from lift off at 9.27 am,” an official said.

Again, the fourth stage was reignited and further lowered to 485 km orbit to serve as an orbital platform for carrying out space borne experimentations for the first time in ISRO’s history. This was the first time it has been envisaged to provide a micro-gravity environment for research organisations and academic institutes to perform experiments, ISRO said.

The experiment payloads are automatic identification system from ISRO for Maritime satellite applications capturing messages transmitted from ships. The other 28 international satellites — 25 3U type, two 6U type and one 2U type nano satellites — are from Lithuania (two), Spain (1), Switzerland (1) and the United States (24). All these satellites were launched under commercial arrangements, ISRO had said.!