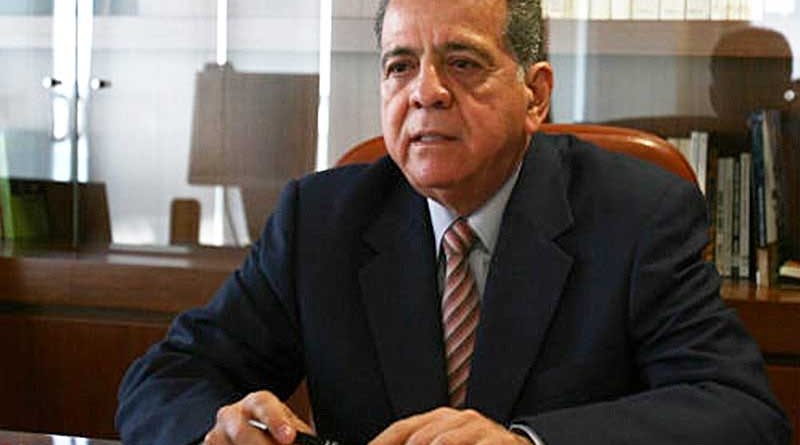 The ex-Vice President of the Republic and ex-prosecutor Isaías Rodríguez has spent almost the whole year of 2018 in Rome in the exercise of his diplomatic position: Ambassador of Venezuela in Italy. But that does not mean that he has dispensed with his analytical and questioning attitude. In an exclusive interview with “Supuesto Negado”, he spoke about national news with a frankness not very common among members of the foreign service.

Rodríguez, who was a member and vice president of both the National Constituent Assembly of 1999 and the current one, has a particularly critical view of the role that this deliberative body has played since 2017. “From an extraordinary and emerging institution it has become a centralized Constituent Power, directed by the constituted power,” he said.

He warned that once the path to the ANC was decided upon, “the country voted for peace and for the solution of the food problem; against hoarding, inflation, smuggling; for the access to daily products and the possibility of living with dignity on their salaries and remuneration, and of this very little has been achieved and, for some, the situation is not only worse but tends to worsen. “

What is your balance sheet on Venezuelan political events in 2018?

I do not have all the information to make an objective evaluation from outside the country. The news that comes is biased. Either everything is very good or everything is very bad. Polarization does not help. Looking into it, we believe that the country is asphyxiated, isolated, bewildered. The economic situation strangles the low income population and also large sectors of the lower middle classes. There is little or no control over speculation and rising prices, and any social and political stability is like riding a roller coaster. The alliances that Chávez built have allowed us to resist the brutal attack of those who have done almost everything to overthrow the government. The rulers do not have many medium or long term successes. Inside the country the economic war has intensified, as with the diplomatic war, with the aggressors in total control of the information. I do not perceive solutions that do not confront a real recognition of the situation, without triumphalism, or threats, or aggressive speeches that cannot be carried out later. China and Moscow are good political and diplomatic examples of how arrogance should  be handled. Trump is, exactly, the opposite model.

How do you explain that in such a complicated economic scenario and with an avalanche of corruption allegations, the government has obtained so many electoral achievements and the opposition is increasingly fragmented?

The electoral achievements must be seen in quotes. If we compare them with the vote count for the opposition, they can be described as successes, but if we compare them with our own electoral results, they are not, and every time abstention is expressed with greater forcefulness. The opposition squandered  its electoral grains on personal positions, deceptions, trickery, internal disagreements, loss of confidence by its voters and by independent sectors or frustrated by the government, in the absence of alternative projects, fear of not repudiating violence, lack of participation in electoral processes that could have won or strengthened their later electoral prospects. All this has been a misfortune for the country it is true, but the government has not done it better, and the country had placed its hopes on the government it chose. They voted for it, not for the opposition. They went to the Constituent Assembly with those same expectations, and very little has been achieved. The defeat of street violence was the work of the voters, not of the Constituent Assembly. The Assembly was installed in the midst of a peace created directly by the people. The country voted for peace and for the solution of the food problem; against hoarding, inflation, smuggling; for affordable access to the daily food basket and the possibility of living with dignity on their salaries and remuneration. Of this very little has been achieved and, for some, the situation is not only worse but tends to worsen. The failure of the opposition is not our success or our achievement, it is a characterization of the country that does not exclude the sectors that lead us. [I.e. the Chavista leadership]

What can be expected from January 10, in view of the imperial strategy of ignoring (once again, but in a heightened way) Nicolás Maduro?

The propaganda against the president, inside and outside the country, is brutal. However, it is not useful for the United States to militarily attack a country like Venezuela. Their own Latin American allies have been careful not to blindly join an invasion that, in justifying it, could also be beneficial for them. Only those who have gone beyond a point of no return (very few) remain committed to being Trojan horses for the Trump administration’ s military threat. This could cause medium term bewilderment in South America. On the other hand, Argentina’s crisis is real, in Colombia there will be no political stability as long as the cadres that took part in the Peace Accords continue to be assassinated; Peru has been a question mark from the time of independence, because neither San Martin nor Bolivar could succeed there. Bolsonaro has been a response to the Workers Party, but the country’s current unity is not forever,  as there are 45 million voters against the new president of Brazil. The world is dislocated; France, Germany, England and Spain have partial stability, the economic conflicts in their territories and with the United States itself are grave. In Europe, the extreme right has consolidated itself into a new type of fascism. I do not believe there will be a world war over Venezuela, but the decisions to be taken by those who act as counterweights in world peace, can not and should not be subject to “tremendismos” [exaggerations]. Consequently, anything can happen, but there is some need to preserve the balance of a planet that not only has problems of climate change, but also of unemployment, migrations, big governments being worn down, and a dangerous extra-state control of the global economy by big capital possessing military and political power.

Is it to be expected that in 2019 the National Constituent Assembly finally concentrated on discussing a new Constitution?

The ANC was the answer to a conjuncture. I am increasingly convinced of this assessment. It was a “tactical” response that, in a bad move, became “strategic”. It has been used for everything and has frayed as much as, or more, than the government. From an extraordinary and emerging institution it has become a centralized Constituent Power, led by the constituted power [the government and State institutions]. In my opinion, today the least important thing for the country is to have a new Constitution. The people of the Bolivarian Republic of Venezuela need to overcome hatreds, their exasperation, their desperation, their instability, the need to have peace, to live with dignity and to trust in their institutions and in a transparent economy.