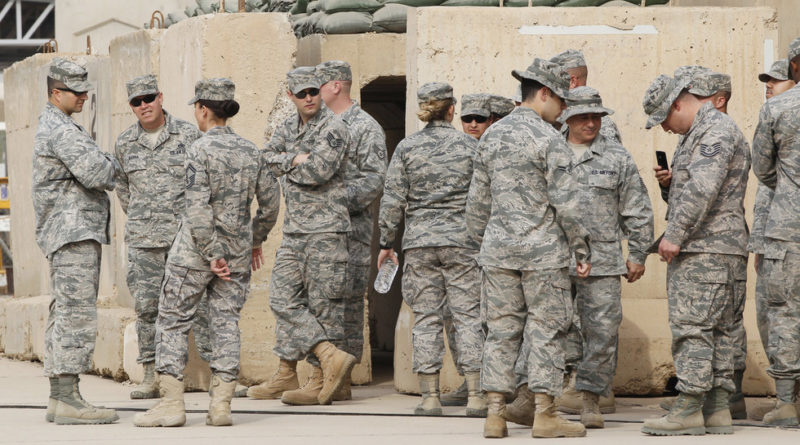 Iraq’s parliament passed a resolution, urged by its caretaker prime minister, calling for the removal of foreign troops from the country, after the US’ assassination of a top Iranian general and a commander of an Iraqi militia.

The non-binding resolution instructs the government to cancel a request for military assistance from the US-led coalition, which was issued in response to the rise of Islamic State (IS, formerly ISIS). With IS supposedly defeated, Iraq will not need foreign troops to fight the jihadists and can close its airspace to coalition aircraft.

The Iraqi government must work to end the presence of any foreign troops on Iraqi soil and prohibit them from using its land, airspace or water for any reason.

According to Press TV, some Western military presence may remain for training purposes. The resolution says Iraqi military leadership has to report the number of foreign instructors that are necessary for Iraqi national security.

At the same time, the Iraqi Foreign Ministry said that Baghdad had turned to the UN Security Council with complaints about US violations of its sovereignty.

Speaking at an emergency parliament session on Sunday, Iraq’s caretaker PM Adil Abdul Mahdi said the American side notified the Iraqi military about the planned airstrike minutes before it was carried out. He stressed that his government denied Washington permission to continue with the operation.

Despite the internal and external difficulties that we might face, it remains best for Iraq on principle and practically.

Qassem Soleimani, the commander of Iran’s Quds Force, and Abu Mahdi al-Muhandis, the deputy commander of Iraq’s Popular Mobilization Force, were killed by a drone strike as their convoy was leaving Baghdad International Airport on Friday morning.Mahdi said Soleimani was on his way to meet him.

The interim prime minister said after the incident it was clear that it was in the interest of both the US and Iraq to end the presence of foreign forces on Iraqi soil.

Responding to the move, the Trump administration has expressed “disappointment” over the outcome of the vote by the Iraqi MPs. State Department spokesperson Morgan Ortagus urged Baghdad to reconsider, taking into account “the importance of the ongoing economic and security relationship” between Iraq and the US.

The decision by the Iraqi Parliament is an “enormous development” not only for the country but for the whole region, political analyst and journalist Andre Vltchek believes, but removing foreign troops might be more difficult.

“We never saw the US army to depart just because the parliament of the occupied country would vote that it should. So, this is not going to be easy for Iraq to get rid of the US and NATO military,” Vltchek told RT.

Washington is likely to “do all sorts of tricks” to try and stay in Iraq. For instance, the US might “move the troops to Iraqi Kurdistan – as they did in the past.” Still, the situation in the region now is different, Vltchek added, and the death of Soleimani may have become a unifying moment for it – at least, for the countries and groups that maintain certain relations with Iran.

Influential Iraqi cleric Muqtada al-Sadr stated in a letter that Iraq should go further and shut down the US embassy.

Washington claims the assassination of Soleimani was an act of self-defense justified by his planning of attacks on American citizens. Tehran called it international terrorism and vowed to avenge the popular military officer.

In the wake of the attack the US advised all American civilians to leave Iraq. US-led coalition troops in Iraq have also suspended all training operations and hunkered down at fortified bases, bracing for retaliatory strikes.

Trump threaten with Sanctions to Iraq

Iraq should brace itself for sanctions that’ll make the ones placed on Iran look pale in comparison if it kicks out the US troops without first covering the costs the US spent on its airbase there, US President Donald Trump said.

“We have a very extraordinarily expensive air base that’s there. It cost billions of dollars to build, long before my time. We’re not leaving unless they pay us back for it,” Trump told reporters on board of the Air Force One on Sunday.

The punitive measures that the US is ready to slap on its supposed ally in the fight against the Islamic State (IS, formerly ISIS) will be even harsher than the crippling sanctions already in effect against Tehran, the US leader said.

“If they do ask us to leave, if we don’t do it in a very friendly basis, we will charge them sanctions like they’ve never seen before ever. It’ll make Iranian sanctions look somewhat tame.”

Trump’s dire warning to Iraq comes after Iraqi MPs passed a non-binding resolution, championed by the country’s caretaker prime minister, and asking the Iraqi government to expel foreign troops by cancelling a request for military assistance from the US-led coalition.

Featured image: US soldiers at the former US Sather Air Base near Baghdad © Reuters / Mohammed Ameen