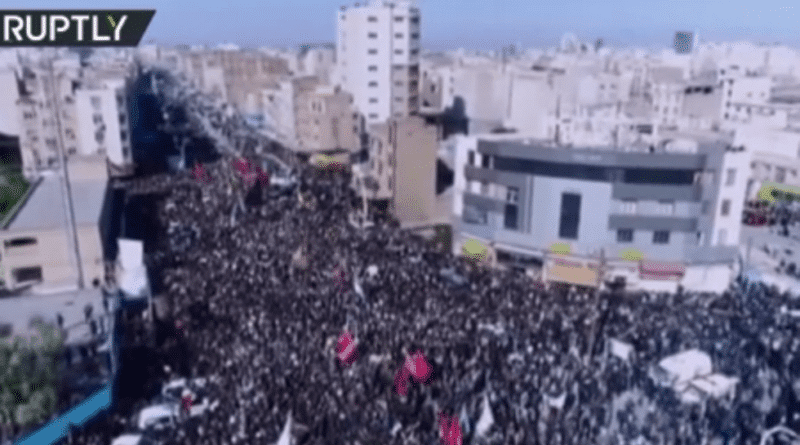 Massive crowds of mourners have gathered for a farewell procession dedicated to Quds Force commander Major General Qassem Soleimani, who was killed in a US drone strike in Iraq earlier this week.

The solemn procession began at 7am at the Rumi Square in Ahvaz, the capital of Iran’s western Khuzestan Province, which borders Iraq. Hundreds of thousands of black-clad mourners have completely filled both the streets and a bridge over the Karun River to pay their last respects to the major general.

Many are carrying photos of Soleimani, who Iranian media has dubbed “the Commander of Hearts.”

Soleimani’s remains, along with those of several other Iranian officials killed in a US drone strike on Friday morning, arrived in Ahvaz from Iraq, where similar processions took place in Baghdad and Karbala, the home of a Shia holy site. The caskets, draped with Iranian flags, were met by the local governor and clerics.

According to the Mehr News Agency, Soleimani is especially revered in Khuzestan, because as a young man he participated in the defense of the region from the Iraqi invasion in the early days of the Iran-Iraq War (1980-1988).

Similar farewell processions are set to be held in several other cities, including Tehran, before Soleimani’s funeral takes place in his hometown of Kerman on Tuesday.

Soleimani, who led the Quds Force – Iran’s elite unit tasked with operations abroad – for more than 20 years, was killed by a US drone shortly after leaving Baghdad’s airport on Friday morning.

The remains of anti-terror commander Leutenant General Qassem #Soleimani and his companions have arrived in southern #Iranian city of #Ahvaz from Iraq where they were assassinated by the US early Friday pic.twitter.com/OP826QNneP

Abu Mahdi al-Muhandis, the deputy chief of Iran-backed Iraqi Shia militias the Popular Mobilization Forces (PMF), died alongside Soleimani. The remains of al-Muhandis, who was an Iranian citizen, were also transported to Iran on Sunday.

The US said that the killing of the Quds leader has prevented several major terrorist attacks against US army personnel and civilians. Tehran, meanwhile, branded Soleimani’s death as a terrorist act by Washington and vowed to retaliate.