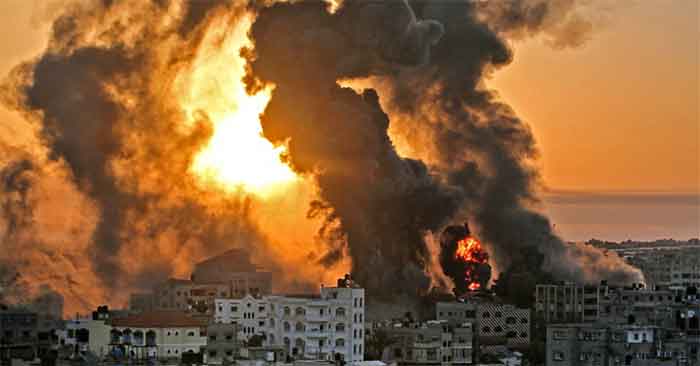 Dr. Akram Kewidar, an assistant professor at the Israa University, Gaza, has sent me videos of the Zionist carnage occurring in the Palestinian enclave. Israeli bombs are reducing entire residential buildings to dust and rubble; bodies lie mangled in pulverized cars; corpses are strewn on the streets like the remains of flattened houses. As I write these words, nearly 83 people, including 17 children, have died; another 500 are injured.

There seems no possibility of respite in the ferocious Israeli attacks. Benny Gantz, the Israeli defense minister, has stated: “Israel is not preparing for a ceasefire. There is currently no end date for the operation. Only when we achieve complete quiet can we talk about calm.” Even as the air offensive continues, plans are being made for a ground operation in Gaza.

In spite of the totally indefensible nature of what is going in Gaza, the desensitized and deafening support for Israeli terrorism continues. After speaking to Israeli Prime Minister Benjamin Netanyahu on May 12, 2021, US President Joe Biden told reporters at the White House that “Israel has a right to defend itself when you have thousands of rockets flying into your territory.” Biden is not even trying to hide his hypocrisy. He shows no parallel concern for Palestinians as Israel continues to assault Gaza in the most atrocious way.

RELATED CONTENT: Number of Palestinians Killed by Israeli Bombings Rises to 53, Including 14 Children

The Pretext of Self-defense
Whenever Israel has used the pretext of self-defense to initiate attacks against Palestine, the results have been horrendous. Israel officially justified Operation Cast Lead of 2008 on the grounds of self-defense against Hamas rocket attacks. However, it was Israel itself which triggered the Hamas reaction by violating the 2008 ceasefire. Moreover, Israel not only targeted Hamas strongholds but also civilian areas and infrastructures.

In Gaza, Israel killed 158 civilians in 2008, while Hamas rocket attacks killed 7 Israeli noncombatants, a ratio of more than 22:1. Israel denounced the detention by Hamas of one Israeli combatant captured in 2006, yet Israel detained some 8,000 Palestinian political prisoners, including 60 women and 390 children, of whom 548 were held in administrative detention without charge or trial (42 of them for more than two years)

The Zionist state’s proclamation of the right of self-defense against Hamas projectiles is in effect the promulgation of a right to use force to prolong a murderous occupation. In his book “Gaza: An Inquest into its Martyrdom”, Norman G. Finkelstein says: “The refrain that Israel has a right to defend itself is a red herring. The real question is, Does Israel have the right to use force to perpetuate an illegal occupation? The answer is no.”

He further explores the glib argument that Hamas’ attacks constitute a “crime against humanity” and are unjustified on humanitarian grounds: “The people of Palestine embraced Hamas as it launched belligerent reprisals against Israel. In the climacteric of their martyrdom, Gazans chose to die resisting rather than to live expiring under an inhuman blockade… The resistance was mostly notional, as the rudimentary projectiles caused little damage. So the ultimate question is, Do Palestinians have the right to symbolicallyresist slow death punctuated by periodic massacres, or is it incumbent uponthem to lie down and die?”

Occupation
The Western media is portraying the ongoing events in Gaza as an instance of “war”. This is patently false. Gaza is under occupation, and has been since 1967. An occupied land is not at war, can never be at war. It is occupied. Occupation is a state of war. The occupied space seeks its freedom, it fights back. It is punished. This is what is happening today.

Palestinians and Israelis are not equivalent actors; one is occupied and the other is the occupier. The latter tries its best to annihilate the former whenever it gets an opportunity to do so. This is the reason why Israel is slaughtering Palestinian children. Khaled Juma, a Palestinian writer, wrote a poem a few years back which captures the anguish of the occupied population:

“Oh rascal children of Gaza.
You who constantly disturbed me
with your screams under my window.
You who filled every morning
with rush and chaos.
You who broke my vase
and stole the lonely flower on my balcony.
Come back,
and scream as you want
and break all the vases.
Steal all the flowers.
Come back…just come back…”

Featured image: A fire rages at sunrise in Khan Yunish following an Israeli airstrike on the southern Gaza Strip on May 12, 2021. (Photo: Youssef Massoud/AFP via Getty Images)